'Set the price of your love: you cannot say so much that I will not pay more'

This extract from Ancrene Wisse follows closely (though not directly) on from the one I posted recently. As you can probably tell, the theme of this whole section is 'love' - the intention is to stir up love of God in the hearts of the anchorites, partly by drawing out the meaning of the initial statement that 'God haveth ofgan ure luve on alle cunne wise', 'God has earned our love in every kind of way'. After describing how Christ has wooed the soul like a faithful knight winning a noble lady, the author goes on to discuss the other ways in which Christ is worthy of love. First, this C. S. Lewis of the thirteenth century describes the four loves which exist in the world (his are: between friends, between men and women, between a woman and her child, and between the body and the soul), then goes on to explain how 'the love that Jesus Christ has for his dear beloved surpasses these four, and goes beyond them all'; then, in the following passage, he imagines Christ addressing the anchorite, explaining to her why she ought to give him her love.

(The translation is mine; the text is from here.)

See then, Jesus Christ’s love for his beloved spouse, the holy church and a pure soul, surpasses everything, and exceeds the four greatest loves which are found on earth. With all this love he even now woos her in this way:

If your love is not to be given, but you want me to buy it – to buy it? How? Either with love or with something else. Love is sold for love – and so love ought to be sold, and for nothing else. If your love is to be sold in this way, I have bought it with love above all others; because of the four greatest loves I have shown the greatest of them all towards you. If you say you do not want to sell it at so cheap a price, but want still more, name what it shall be, set the price of your love. You cannot say so much that I will not pay more. Do you want castles, kingdoms? Do you want to rule the whole world? I will give you better – make you queen of the kingdom of heaven with all this. You shall be seven times brighter than the sun, no evil shall come near you, and joy will never be lacking for you; everything you want shall be done in heaven and on earth too, yes, even in hell; no heart ever imagined what happiness I would give you for your love, immeasurably, incomparably, infinitely more: all the wealth of Croesus, who was the richest of kings; the radiant beauty of Absalom, who as often as his hair was trimmed sold the cuttings – the hair that he cut off – for two hundred shekels weighed in silver; the speed of Asahel, who competed with deer in running; the strength of Samson, who killed a thousand of his enemies at once alone, without companions; the generosity of Caesar; the renown of Alexander; the vigour of Moses. Would not a man give all that he owned for one of these? And all these together are not worth a needle compared to my body.

If you are so very obstinate and so out of your mind that, although you have nothing to lose, you forsake such advantages and happiness of every sort, look, I hold here a cruel sword over your head with which to separate life and soul and plunge them both into the fire of hell to be the devil’s whore, shamefully and miserably for ever. Now answer and defend yourself if you can against me, or grant me your love which I long for so much, not for my sake, but for your own great advantage."

Thus our Lord woos us. Is she not very hard-hearted who after such a wooing will not turn to his love, if she thinks well about these three things, what he is, what she is, and how great is the love of one as high as he is towards one as low as she is? And so, the psalmist says 'there is nothing hidden from the heat of the sun'. There is no one who may hide away so that she may not love him. The true sun climbed up high in the third hour of the day for your sake on the high cross, in order to spread love’s hot rays; thus he was eager, and is until this day, to kindle his love in the heart of his beloved, and he says in the Gospel, 'I am come to send fire on the earth, and what will I, if it be already kindled?' I am come, he says, to bring fire to the earth, that is, burning love to earthly hearts, and what do I long for except for it to burst into flame? 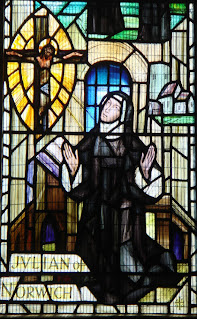