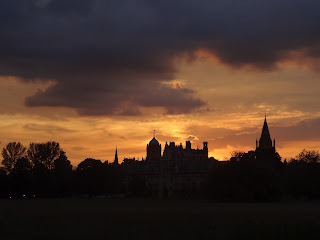 Way back in Lent I posted some translations of the Compline hymn 'Christe, qui lux es et dies', and so here are some versions of another, 'Te lucis ante terminum'. 'Te lucis' dates probably from the seventh century, and in Latin goes like this:


Very literally:
To thee, before the end of the light, Creator of all things, we pray, that thy accustomed mercy may be our protector and guard.
Let dreams depart from us, and the phantoms of night, and restrain our enemy, that our bodies may not be polluted.
Grant this, all-powerful Father, through Jesus Christ our Lord, who with thee in eternity reigns with the Holy Spirit.


But back to translations. The English version best known to me, because we sing it at Compline in my college, is J. M. Neale's:

Before the ending of the day,
Creator of the world, we pray
That with Thy wonted favour Thou
Wouldst be our guard and keeper now.

From all ill dreams defend our eyes,
From nightly fears and fantasies;
Tread under foot our ghostly foe
That no pollution we may know.

O Father, that we ask be done
Through Jesus Christ, thine only Son,
Who with the Holy Ghost and Thee
Dost live and reign eternally.


This is Neale in appropriately archaic mode: my favourite line is 'tread under foot our ghostly foe', which nicely plays with all the senses of the word 'ghostly' - it means 'spiritual', of course, but it's particularly appropriate in the context of a verse about dreams, illusions and fantasies. It's interesting to compare it to this sixteenth-century version, which is from a Prymer (that is, a vernacular Book of Hours intended for the use of the laity) dated to 1545. The words (from this book, p.68) are:


O Lorde, the maker of al thyng,
We pray the nowe in this euenyng
Us to defende, through thy mercy,
From all disceite of oure enemy.

Let vs neither deluded be,
Good lorde with dreame or phantasy:
Oure hearte wakyng in the thou kepe,
That we in sinne, fal not on slepe.

O father, throughe thy blessed sonne,
Graunt vs this, oure peticion:
To whom with the holy gost alwaies
In heauen and yearth, be laude and praise.


This text is sometimes attributed, like a number of other sixteenth-century verses, to the authorship of Henry VIII; well, you never know, but it looks spurious. The interesting vocabulary is all in the second verse; we'll get to dreams and phantasies in a moment, but it's useful to note deluded, a relatively new word in English at this date. In this sense to delude means "To befool the mind or judgement of, so as to cause what is false to be accepted as true; to bring by deceit into a false opinion or belief; to cheat, deceive, beguile; to impose upon with false impressions or notions." (OED 3a). This is stronger and scarier, perhaps, than its modern overtones.

Here's an Old English interlinear gloss of the hymn which, while not strictly a translation, provides some insight into how the vocabulary might have been translated in the eleventh century:

(From here, with punctuation added by me)


You'll notice that the word dream doesn't appear in the Old English; instead there's swefna, an OE word which literally means 'sleep', but is also the usual word for 'dream' in the modern sense. That's because dream in Old English means 'joy, revelry, gladness' and also 'music, melody', but not (to the confusion of many poor undergraduates learning Old English) 'dream' in the sense of 'vision'.

(For the double meaning of 'joy' and 'music' you might want to compare the semantic range of glee, which I discussed here a little while back. I think it tells us something pretty great about Anglo-Saxon culture that there's so much overlap between words meaning 'joy, revelry' and 'music, melody'...)

Anyway, dream in the sense of 'joy' fell out of use early in the Middle English period (though the sense 'music' survived a little longer in poetry). This was partly through the influence of Old Norse, where draumr always meant essentially what dream means in Modern English - sleeping or waking visions. This is why the word was available to the 1545 translator but not, apparently, to the person who made the Old English gloss.

(I might as well also note the tangentially-related point that Neale's use of ill in the phrase "ill dreams" - i.e. "evil dreams", a usage now a tiny bit archaic - is another word derived from Old Norse; it came into Middle English from ON illr, which means 'bad, wicked'.)

The other kind of dream in this hymn is the phantasmata of the Latin, rendered by the 16th-century translator and by Neale as fantasy. This word, which is ultimately of Greek origin, first came into English in the fourteenth century, via French (which means that to the author of this poem, to which it is central, the new word probably had a slightly technical, learned sound; he's almost flaunting his knowledge of it). The Old English has gedwymeru, a form of gedwimer, which means 'an illusion produced by sorcery'. It has a wonderful (I almost said a fantastic) sound.


This seems like a good place to post a description of the purpose of Compline in Old English, which I came across a little while ago. It’s from a manuscript made in c.1065 at the Benedictine monastery at Worcester. The manuscript gives a brief outline of the form of each of the monastic hours, with a few sentences to describe the role of each. This is the description of Compline:

Thanks so much for this post! I went looking for a literal translation of "Te lucis ante terminum" and got that and much more. :) I love the older English translations and your little remarks upon them.

My own translation of the first two verses (I have not yet tackled the doxology, and to be honest I am not sure it is possible to improve on what has gone before) retains the metrical form necessary to sing it to Tallis' plainchant, and is as follows:


To thee, ere daylight endeth now
That made'st all things, we pray wilt thou
With wonted care, most tenderly
Our guardian and protector be?


I think it is important to note that in the Latin, it starts somewhat tentatively and becomes progressively more assertive as the prayer proceeds. I have tried to incorporate this into my translation, progressing from the plaintive "wilt thou?" through the jussive "far from us may" to the assertive supplication "Keep thou ... "

I would love to hear my translation sung at Compline somewhere, some time ...