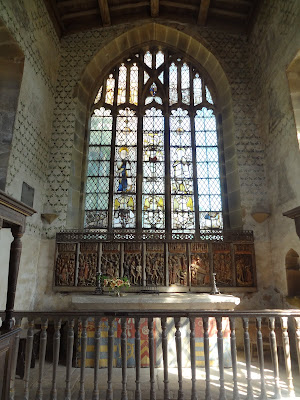 This is the chapel of Haddon Hall, in Derbyshire, which I visited last week. It's just about the most perfect manor house you'll ever see, and one of its many perfections is a glorious medieval chapel, built into the fabric of the house, with surviving wall-paintings and stained glass of incredible quality. I intend to post about both house and chapel, because I loved it - it's impossible not to love it. But since I'm a little out of the habit of blogging and Haddon Hall deserves a proper treatment, today I'm just going to post about the altar-piece.

This is not original to the chapel - it was purchased for the house in 1933, during the chapel's restoration by the 9th Duke of Rutland - but it is contemporary with the fifteenth-century glass and frescos. It's made of alabaster, perhaps the material in which English artists of the Middle Ages achieved their finest effects, and is therefore also an appropriately local art form, since the Midlands (specifically Nottingham) were the centre of alabaster production in the period.

It has nine scenes, of an original eleven, depicting events from the Passion and Resurrection of Christ. (For an almost-contemporary depiction of similar subjects in another art form, you might like to compare the Despenser reredos from Norwich). 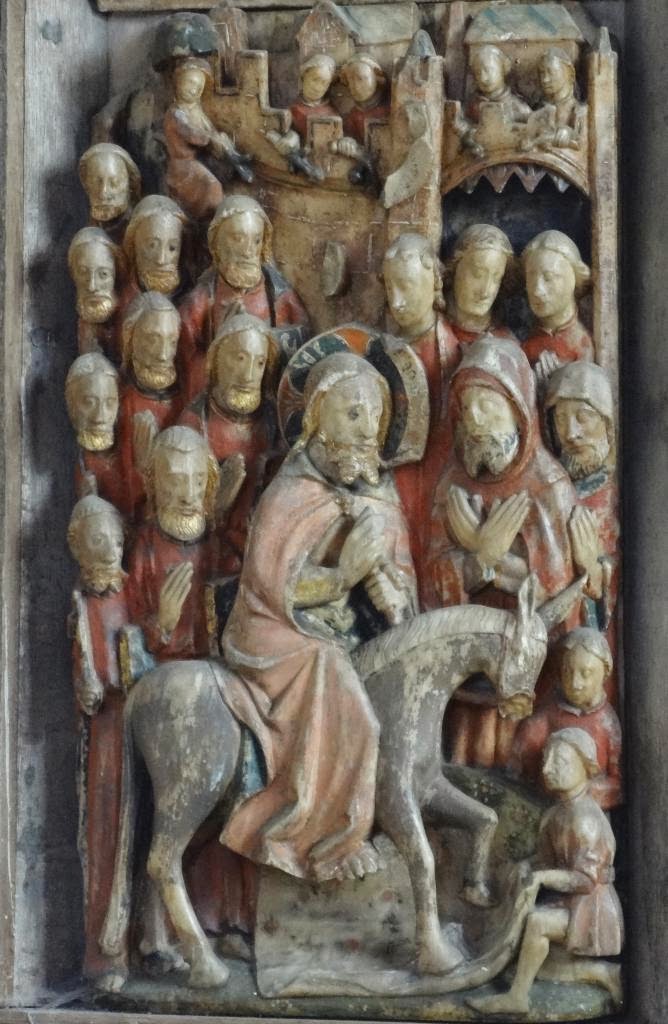 The carving is exquisite and somehow, even in its delicacy, conveys a sense of drama and movement. Look at the figure on the left here - St Peter with a tight grip upon his sword, while the hand of Christ is swept back with a gesture as if to restrain him: 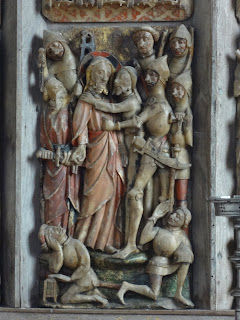 This is a very striking depiction of the mocking of Christ, his head covered, his wrists bound with a tiny woven rope: 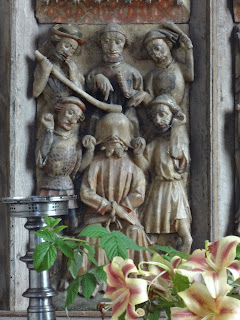 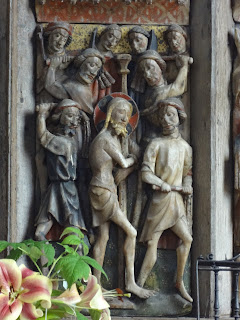 There is no depiction of the Crucifixion itself (I'm not sure if that's one of the two omitted scenes) but I was struck by the detail that here, as Christ is carrying his cross, the two men on either side of him are carrying a hammer and nails: 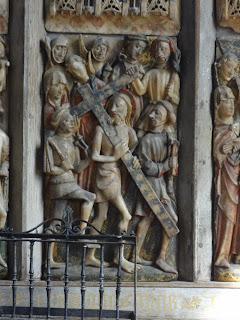 This scene poignantly conveys the weight of the body as it is taken down from the cross - and notice the workmen detaching the nails with some kind of pliers: 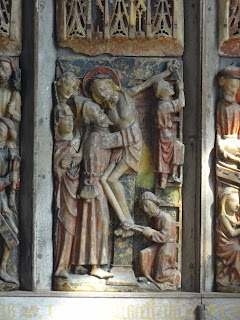 The shaft of sunlight has cast most of this picture into shadow, but it couldn't have fallen in a more appropriate place: 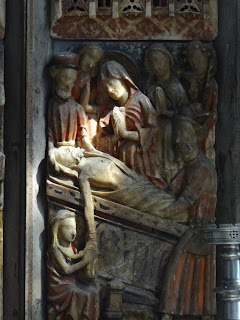 I particularly like the woman seated below holding Christ's fallen hand. This must be Mary Magdalene, and she is actually, I think, wiping his hand with her long hair.

In the Resurrection scene, where Christ has one foot in the tomb and one outside, I particularly like the feathery scarlet wing of the angel in the top-left corner: 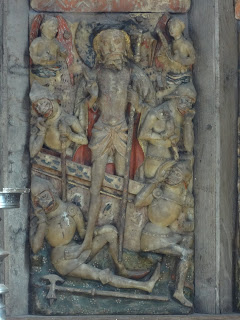 The last scene is almost my favourite, the meeting between Christ and Mary Magdalene in the garden ('walled around' by the fence at the bottom): 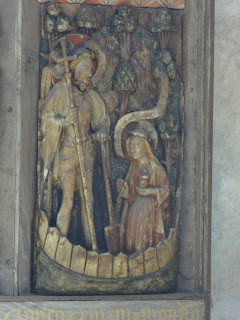 Christ is holding a spade, to remind the viewer of Mary taking him for a gardener (an understandable mistake, if he had actually been carrying a spade...)


ETA: a link to a previous post on an alabaster altar-piece, this time depicting Thomas Becket and St Catherine.
Posted by Clerk of Oxford at 1:42 pm

Email ThisBlogThis!Share to TwitterShare to FacebookShare to Pinterest
Labels: Churches, Medieval, The Passion