24 February is the anniversary of the death in 616 of Ethelbert, king of Kent, one of the most important rulers in Anglo-Saxon history. It was during his reign that Augustine and his companions arrived in England, seeking to convert the land of the Angles (sorry, Gregory - 'angels'). As Bede tells the story, King Ethelbert, though initially sceptical, eventually agreed to be baptised, and gave the Augustinian mission political and material support in their efforts to spread Christianity. Ethelbert thus has a good claim to be the first English Christian king, and that was how the Anglo-Saxon church later saw him. This is how Bede tells of his death (from the Historia Ecclesiastica, Book II, ch.5, as translated here):

In the year of our Lord's incarnation 616, which is the twenty-first year after Augustine and his companions were sent to preach to the English nation, Ethelbert, king of Kent, having most gloriously governed his temporal kingdom fifty-six years, entered into the eternal joys of the kingdom which is heavenly. He was the third of the English kings that had the sovereignty of all the southern provinces that are divided from the northern by the river Humber, and the borders contiguous to the same; but the first of the kings that ascended to the heavenly kingdom...

King Ethelbert died on the 24th day of the month of February, twenty-one years after he had received the faith, and was buried in St. Martin's porch within the church of the blessed apostles Peter and Paul, where also lies his queen, Bertha. Among other benefits which he conferred upon the nation, he also, by the advice of wise persons, introduced judicial decrees, after the Roman model; which, being written in English, are still kept and observed by them. [And were still being observed long after Bede's time]. Among which, he in the first place set down what satisfaction should be given by those who should steal anything belonging to the church, the bishop, or the other clergy, resolving to give protection to those whose doctrine he had embraced.


I posted the earlier part of Bede's account of Ethelbert's conversion here, and of what came after his death here (hint: bad things for the church). As a native of East Kent and a fan of Anglo-Saxon saints (and in particular, influential queens like Ethelbert's wife Bertha), this whole story is a favourite of mine. I like collecting modern depictions of Ethelbert and Bertha - it's always interesting to see how later artists imagine and present Anglo-Saxon people, and I've previously posted about such depictions at Minster-in-Thanet, Pugin's church in Ramsgate, St Martin's (the church where Bertha worshipped), and Canterbury Cathedral, as well as about the ruins of St Augustine's Abbey, where Ethelbert and Bertha are buried.

Today I want to post some photographs of the most up-to-date of all of these modern depictions.  Between St Augustine's and the Cathedral lies an area of Canterbury known as Lady Wootton's Green: 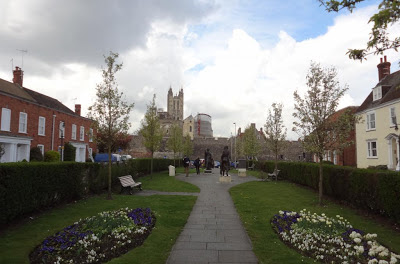 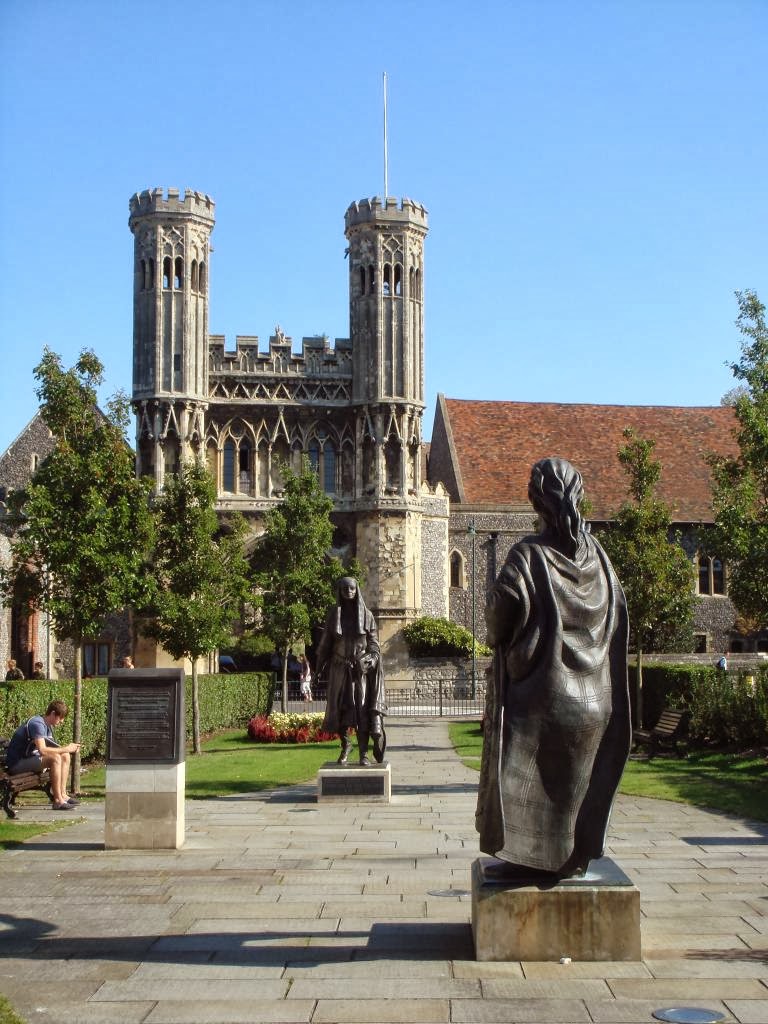 In 2006, statues of Ethelbert and Bertha were installed here by the Canterbury Commemoration Society (who are now planning to erect a statue of Chaucer in the middle of the city - featuring some, well, surprising faces among the Canterbury pilgrims - so that's something to look forward to!). The figures are the work of sculptor Stephen Melton. Here's Ethelbert: 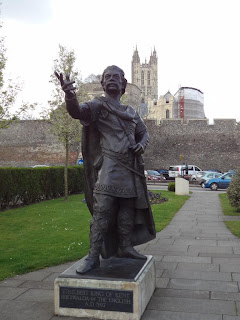 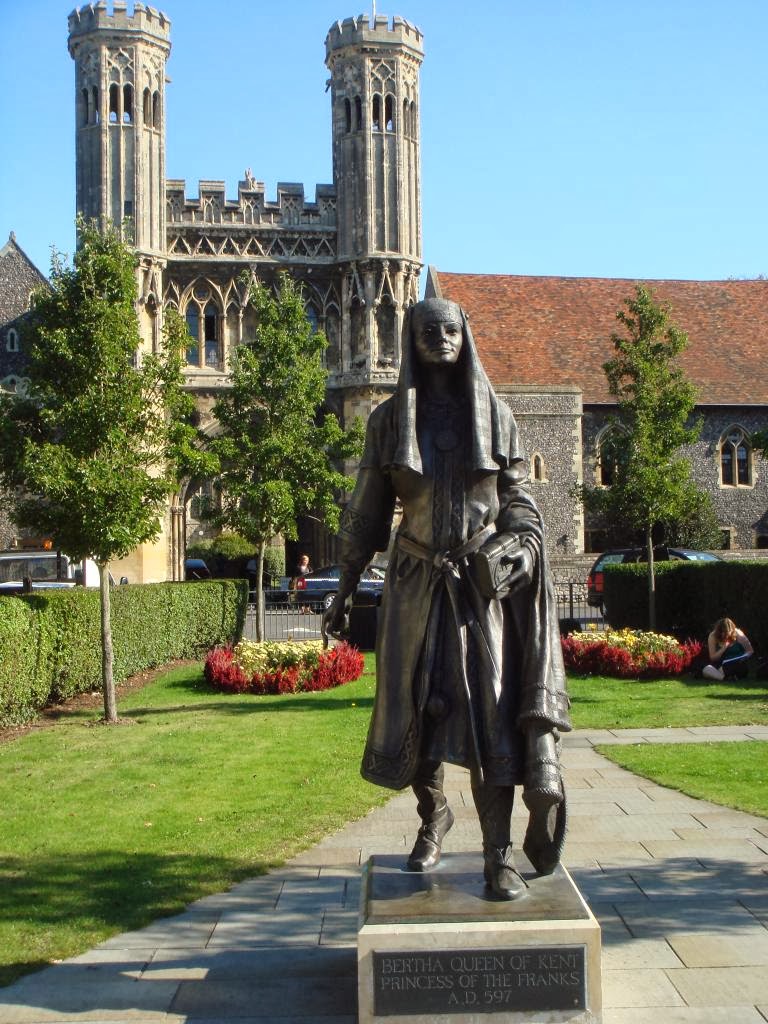 The idea is that this scene depicts Ethelbert coming to greet Bertha and tell her of the arrival of Augustine and his monks, as she returns from worship at St Martin's Church. (The towers behind her are the gatehouse of St Augustine's Abbey, now part of the King's School). It's very impressive how much research has gone into their clothing and accessories - they're exactly accurate for the period, status and cultural allegiances of Ethelbert and Bertha. Bertha is wearing a Frankish costume based on items found in a sixth-century grave at St Denis, Paris (possibly the grave of Aregund, wife of Chlothar I): 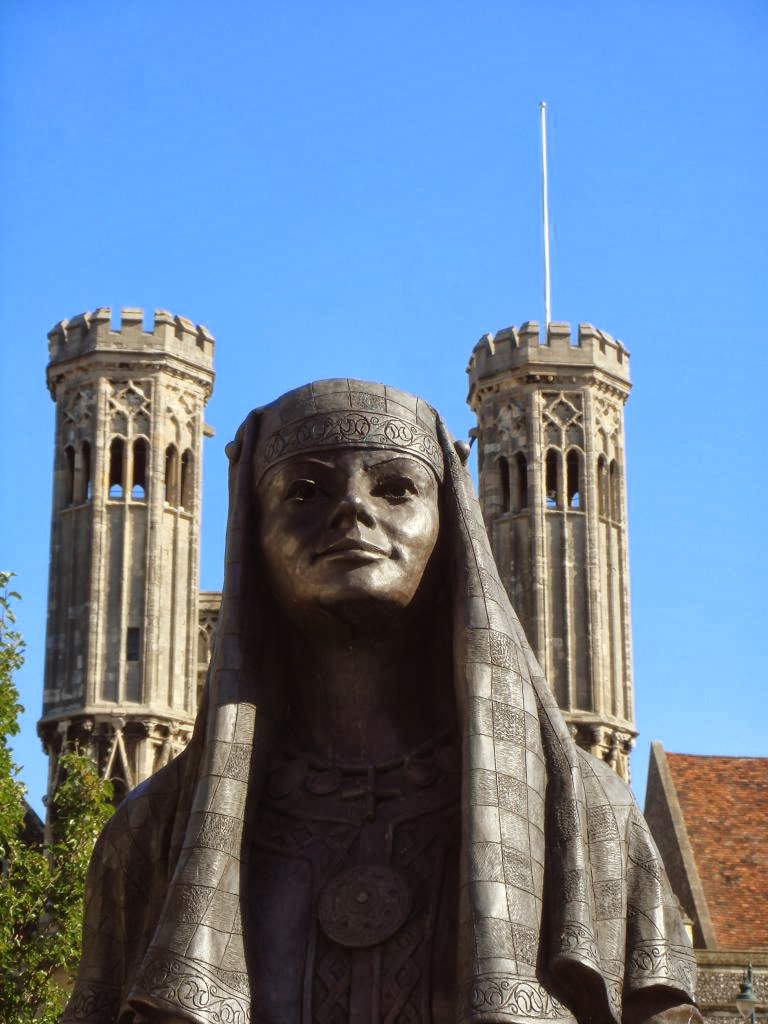 Bertha was a Frankish princess, who was already a Christian before she married the pagan Ethelbert. Some of the jewellery she's wearing will be immediately familiar to anyone who has studied Anglo-Saxon art - for instance, she has a Kentish disc-brooch: 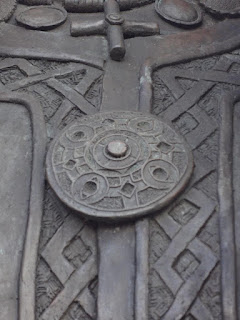 Specifically, she's wearing the splendid Kingston brooch, which was found in a grave in a village near Canterbury, and is one of the largest and most impressive examples of its type. Its glorious gold and garnets, and the exceptionally fine workmanship, are a vivid reminder of the wealth and power of Kent in this period. Her necklace with the cross, appropriate for a Christian queen, is based closely on this one, found at Desborough in Northamptonshire (now in the British Museum). She also has a leather-bound prayer book: 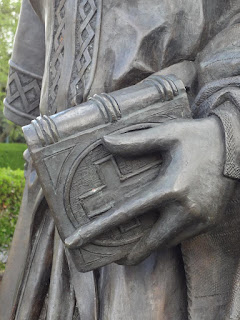 Ethelbert's accoutrements are based on those found at Sutton Hoo: 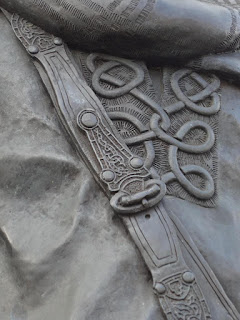 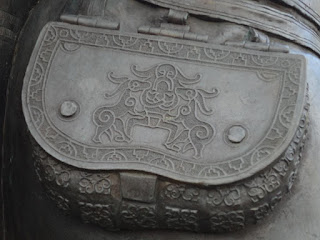 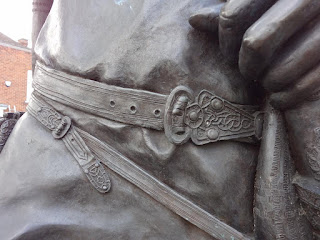 Compare the Sutton Hoo buckle and purse-lid. If the king buried with these treasures at Sutton Hoo is, as is often suggested, Rædwald of East Anglia, he was closely connected to Ethelbert: Bede tells us that Rædwald was for a time under Ethelbert's overlordship, and accepted baptism at Ethelbert's court (although he soon apostatised on his return to East Anglia). Rædwald's protégé Edwin of Northumbria married Ethelbert's daughter Ethelburh. So Sutton Hoo is just the right place to seek inspiration for Ethelbert's clothing, and this attention to detail is really lovely to see. 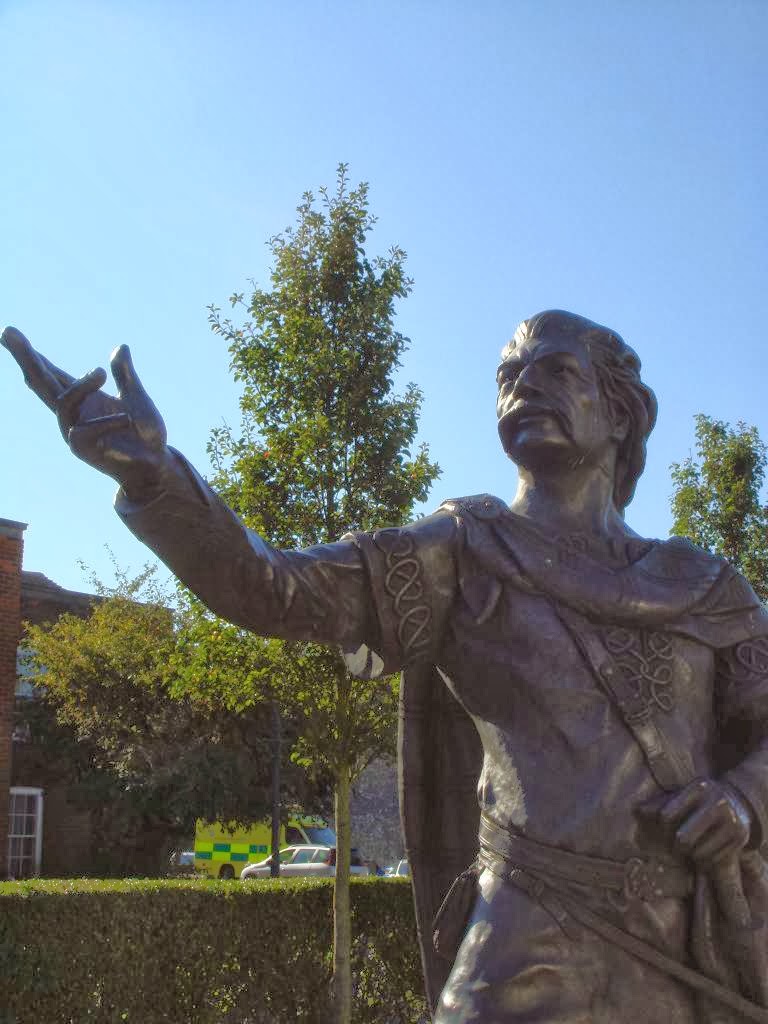 For a contrast, here are some more Ethelberts from my collection of pictures, not all of which exhibit a similar concern for Anglo-Saxon accuracy! This is from the ceiling of a chapel in Westminster Cathedral: 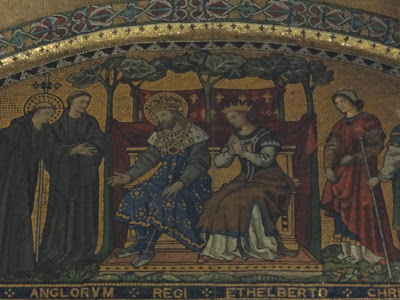 I don't know what Ethelbert's supposed to be wearing here, but it is pretty.  Another, from the cloisters at Worcester Cathedral (nice detail on the armour of the man in the foreground, but I suspect it has no real-life parallels!): 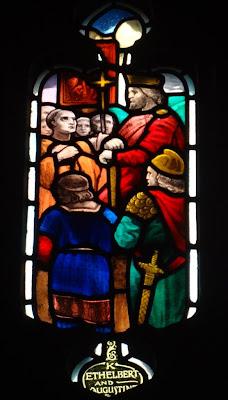 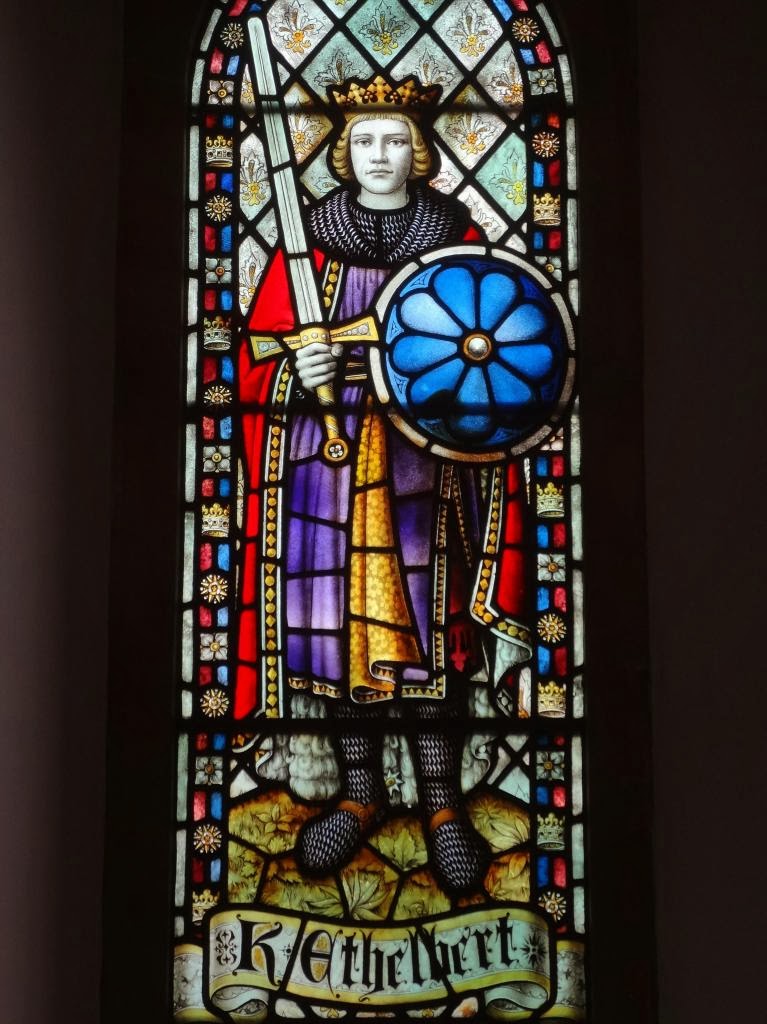 I've never seen a shield which looked so much like a flower... Opposite this Ethelbert is a depiction of Bertha from the 1970s (?): 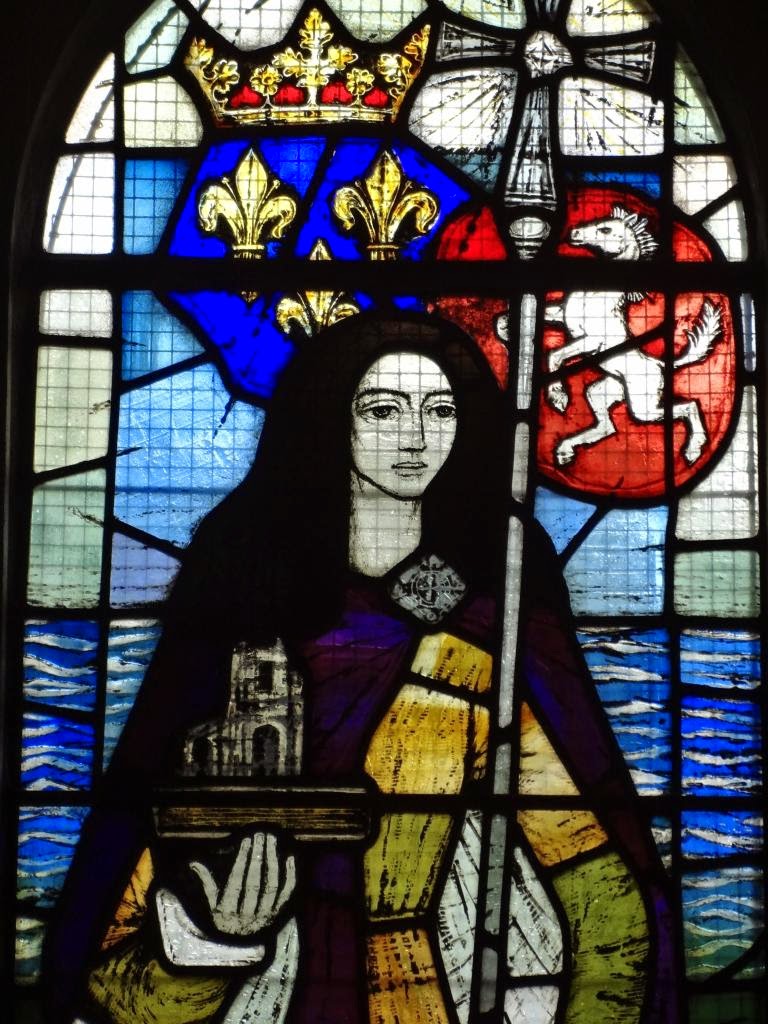 The modern church at Reculver replaces one founded in the seventh century on a Kentish royal estate, which was built within the remains of a Roman shore fort. That church has since fallen victim to coastal erosion; as the sea grew closer it was abandoned, and was partially pulled down at the beginning of the nineteenth century. All that remains of it are the two towers of the twelfth-century building, a local landmark which can be seen across the fields from the new church: 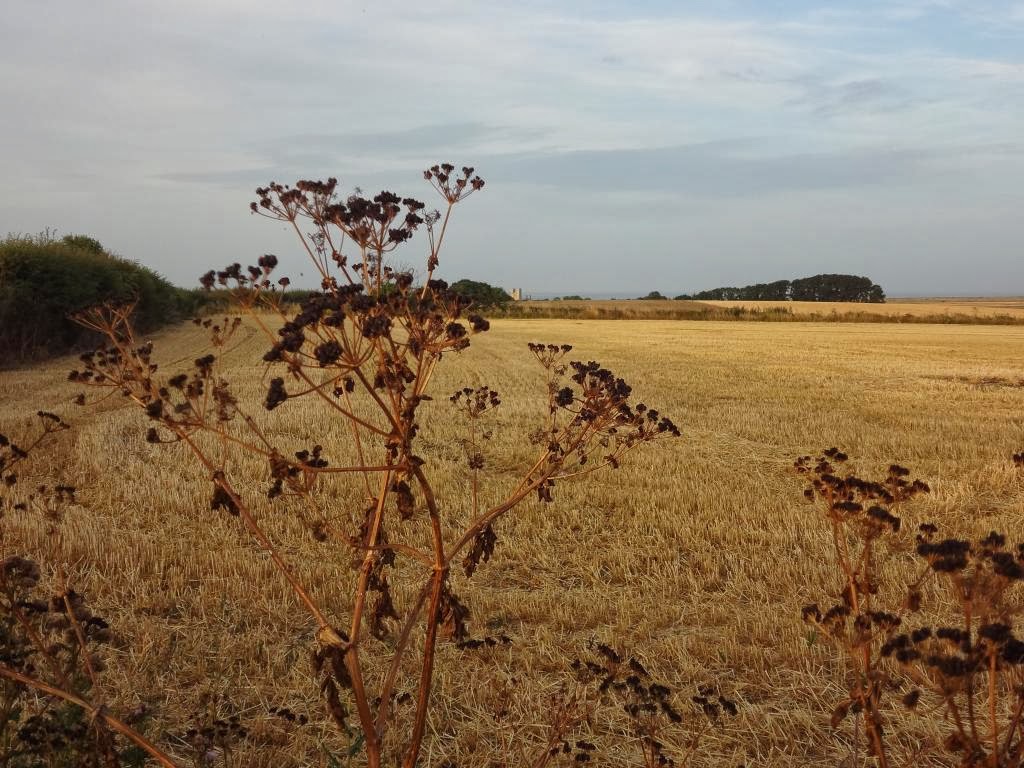 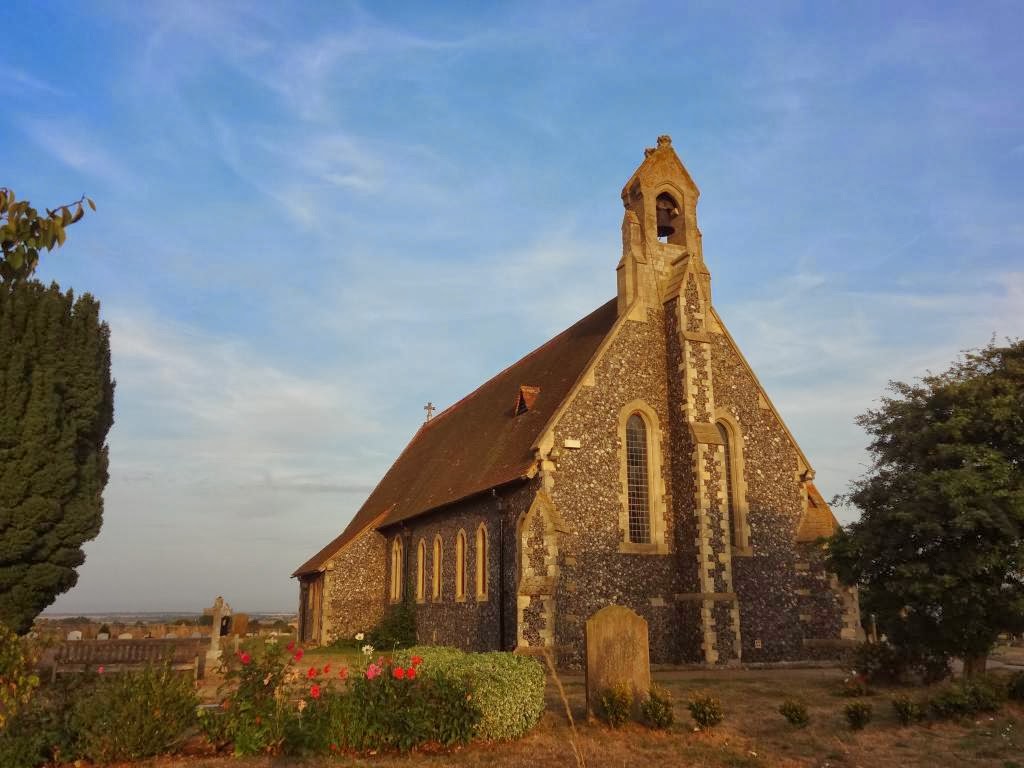 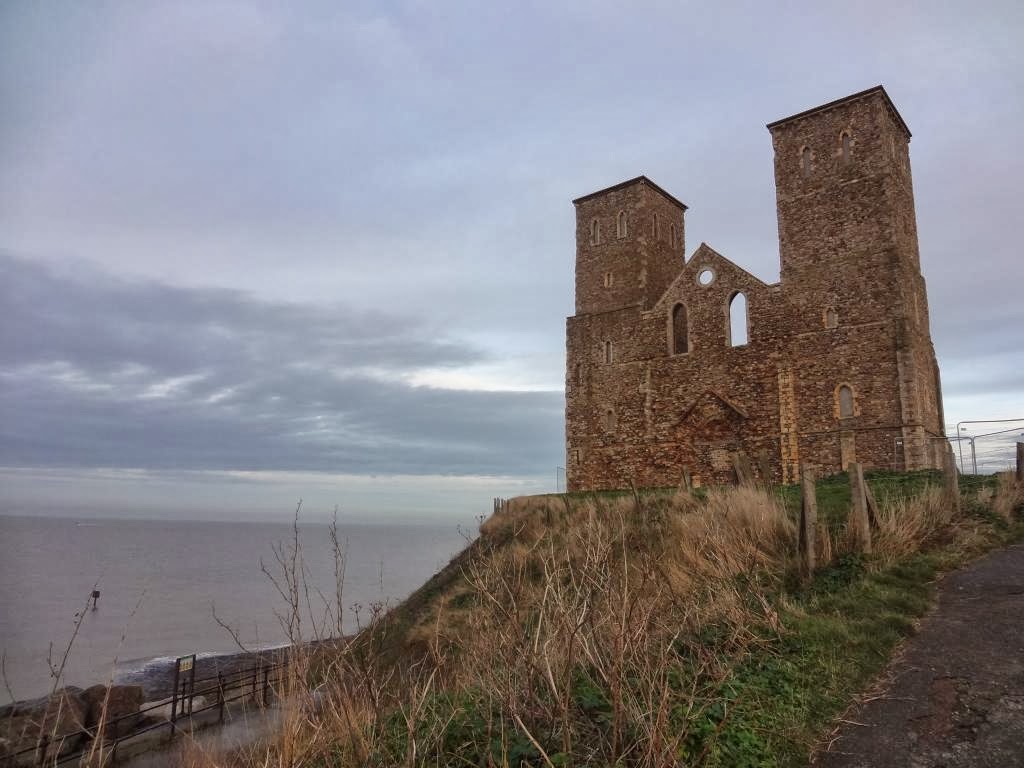 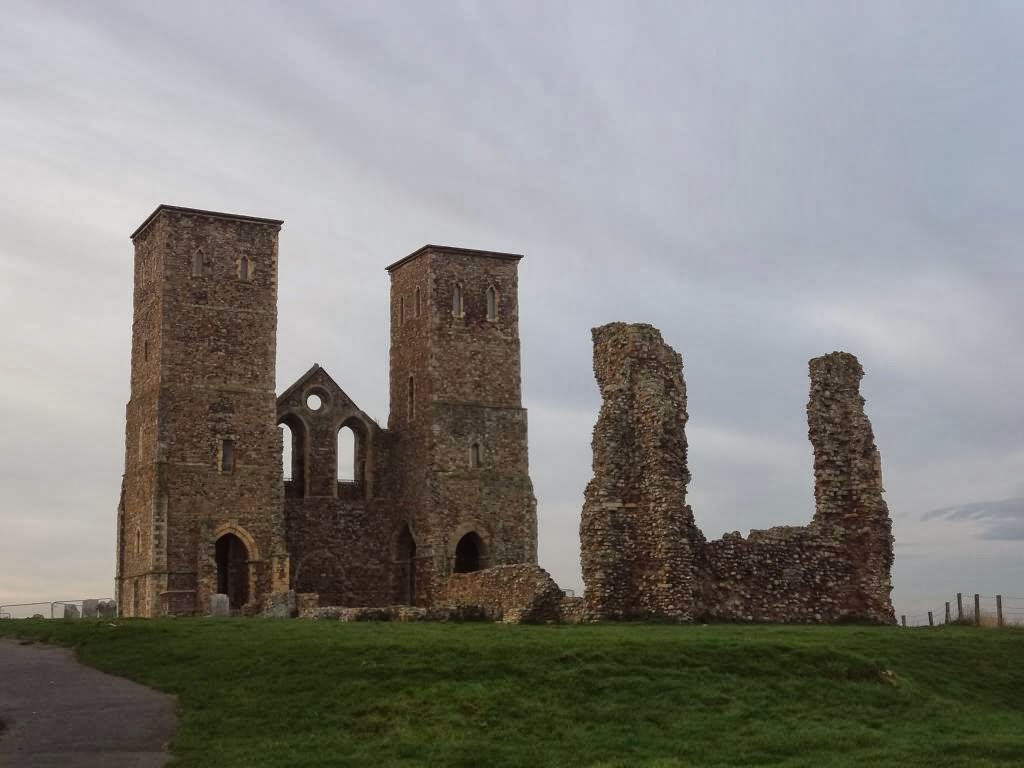 Some later kings of Kent were buried here, but their tombs have long since disappeared.

To return to depictions of Ethelbert, here are some pictures from the church of St Peter and St Paul in the little village of Worth in East Kent: 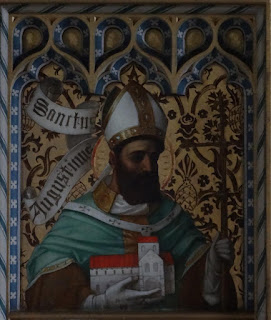 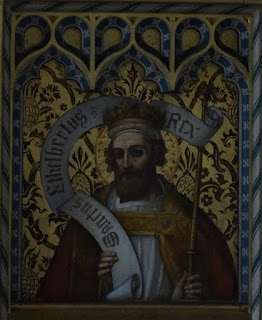 These are from the Victorian reredos in the medieval church, which is a sweet, funny-shaped thing like a cottage in a fairy-tale: 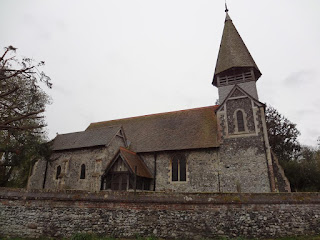 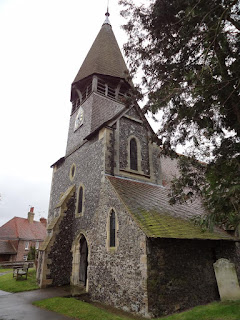 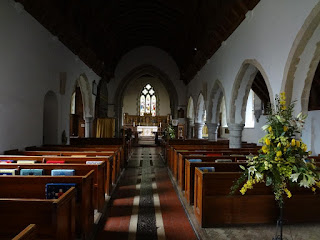 Right at the back was Ethelbert, in the dark, and so for once I broke my rule of not using flash for photographs and took this bright golden picture: 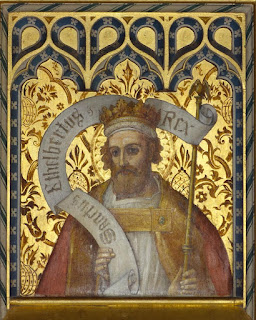 Bede might have agreed that all this gold seems appropriate for the first English king to wear both an earthly and a heavenly crown.
Posted by Clerk of Oxford at 3:47 pm

I can't see the pictures! But I dare say it's a temporary glitch of my server or similar, and they'll show up next time I open the computer. I hope so! They sound very alluring. :)

How strange! I don't see any reason why that should be... I hope they show up in time!

Oh, these are lovely! Thank you for posting them. My son, who is 10, loves all things to do with the early kings. I will be sure to share them with him.

Yes, as suspected, now that I've waited a day and closed down and opened up again, the pictures are there. (More of the never-ending series of Mysteries of the Internet!) And I have been enjoying them very much, especially statue-Ethelbert's gear - the belts and purse - and glorious golden Ethelbert in Worth - thank you!

The history of Canterbury seems so rich in Christianity when looking into all of the saints there,in addition to being the first place of a saintly Christian rule with a sainted Christian Queen and converted Christian King, along with their correspondence with St. Gregory the Great and Augustine and then Thomas Beckett and Anselm, among others. It is wonderful to see that they have erected the statues which seem to be extraordinarily well done. And I am glad that they
will do one of Chaucer. The collection of photographs are very remarkable to see altogether.
Your efforts are greatly appreciated and it is definitely a great tribute with which I am certain St. Ethelbert would be pleased-

That's so cool, Anonymous - your son has great taste! I hope you have a future medieval historian in the making there.

Heliopause, I'm glad you got to see the pictures eventually! Maybe the internet just wanted you to enjoy them more because you had to wait...

And happy feast of St. Ethelbert to you too, Anonymous #2! Canterbury has a fascinating history and the city really is very good at commemorating it and sharing information about it. I'm so impressed by the research which went into these statues (and the information boards which go with them, which I relied heavily on for this post) - it's an excellent project, a truly respectful and creative tribute to the past.

Wonderful post! Kudos to the designer of the new statues for the keen attention to detail. That's wonderful to see! Ethelbert's story is a reminder that Christianity and the men who spread it brought with them concepts of law and social order, and the disciplines and ideas that were necessary for good government.