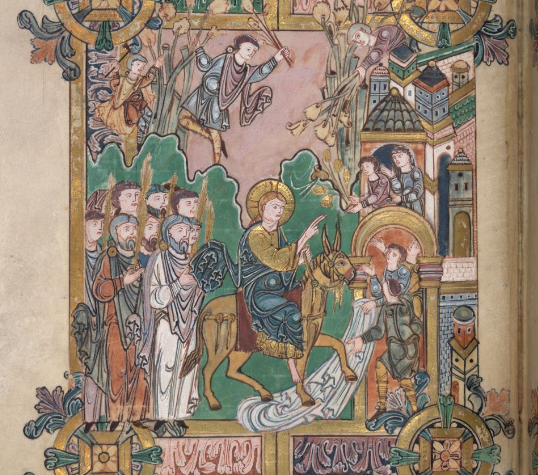 The entry into Jerusalem in the Benedictional of St Æthelwold (BL Additional 49598, f. 45v)

The Anglo-Saxon homilist Ælfric, at the end of a sermon for Palm Sunday written at the close of the tenth century, describes to his congregation the ritual they have just performed, and then tells them what to do next:


'It is the custom in God's church, established by its teachers, that everywhere in God's congregation the priest should bless palm-branches on this day, and distribute them, thus blessed, to the people; and God's servants should then sing the hymn which the Jewish people sang before Christ when he was coming to his Passion. We imitate the faithful ones of that people with this deed, for they carried palm-branches with hymns before the Saviour. Now we shall hold our palms until the singer begins the offering-song, and then we shall offer the palm to God because of what it signifies: a palm betokens victory. Christ was victorious when he overcame the mighty devil and rescued us, and we also shall be victorious through God's power, so that we conquer our evil habits, and all sins, and the devil, and adorn ourselves with good works; and at the end of our life we shall deliver the palm to God, that is, our victory, and thank him fervently, that we through his help have conquered the devil, so that he could not deceive us.'

Ælfric's description gives us a vivid picture of his congregation all holding their palm-twigu, just as congregations in churches throughout the world will be doing today. The rest of the sermon interprets the details of the Gospel passage of the day, Christ's entry into Jerusalem; the extract below is from the text here, with my translation.

'The two disciples whom Christ sent to bring the ass betokened the teachers whom God sends to instruct mankind. There were two of them in order to show the characteristics which a teacher ought to have: he should have learning, so that he may wisely instruct God's people in true belief, and he should set a good example to the people by good works; and so with those two things, that is, with learning and with a good example, he should ever draw the people to God's will.

The tied ass and its foal betoken two peoples, the Jewish people and the pagans. I say 'pagans' because in those days all mankind were still living in paganism, except only the Jewish people, who followed the old law at that time. They were 'tied' because all mankind was bound with sins, as the prophet says: "Every man is bound with the ropes of his sins." Then God sent his apostles and their successors to bound mankind, and commanded them to be untied and led to him. How did they untie the ass and the foal? They preached to the people about the true faith and God's commandments, and confirmed their preaching by many miracles. The people then turned from the service of the devil to the worship of Christ, and were freed from all sins through holy baptism, and led to Christ.

An ass is a foolish animal, unclean, and stupid compared with other animals, and strong for carrying burdens. And so were men, before Christ's coming, foolish and unclean, while they served idols and many kinds of sin, and bowed to the images which they had made themselves, and said to them, "Thou art my God." And whatever burden the devil placed on them, they bore. But when Christ came to mankind, he turned our foolishness to wisdom and our uncleanness to pure virtues. The tamed ass betokened the Jewish people, who were tamed under the old law. The wild foal betokened all other people, who were heathen and untamed; but they became tamed and faithful when Christ sent his disciples through the whole world, saying, "Go through all the world, and teach all nations, and baptize them in the name of the Father, and of the Son, and of the Holy Ghost, and command that they hold all the commands which I have taught you." 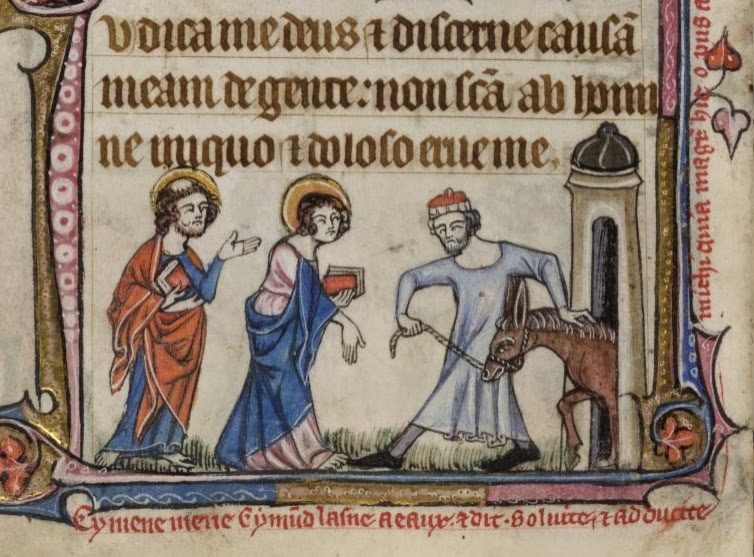 The master of the asses asked them why they untied his asses, and in the same way the chief men of every people perversely opposed the preaching of God. But when they saw that the preachers, through God's power, healed the lame and the blind, and gave speech to the dumb, and raised the dead to life, then they could not withstand those miracles, but all at last turned to God. Christ's disciples said, "The Lord needs the asses, and sends for them." They did not say 'our Lord', or 'your Lord', but simply, 'the Lord'; for Christ is Lord of all lords, both of men and of all creatures. They said, "He sends for them." We are exhorted and invited to God's kingdom, but we are not forced. When we are invited, we are untied; and when we are left to our own choice, then is it as though we are sent for. It is God's mercy that we are untied; but if we live rightly, that will be both God's grace and our own zeal. We should constantly pray for the Lord's help, since our own choices have no success unless they are supported by the Almighty.

Christ did not command them to lead to him a proud steed adorned with golden trappings; instead he chose a poor ass to bear him, because he always taught humility, and gave the example himself, saying "Learn from me, for I am meek and very humble, and you shall find rest for your souls." This was prophesied of Christ, and so were all the things which he did before he was born as man...

We will tell you a parable. No man may make himself a king, because the people have the option to choose for king someone who is acceptable to them; but after he has been consecrated as king he has power over the people, and they cannot shake his yoke from their necks. In the same way every man has his own choice, before he sins, whether he will follow the devil's will or withstand it. If he binds himself with the works of the devil, he cannot unbind himself by his own power, unless the Almighty God unbind him with the powerful hand of his mercy. By his own will and his own carelessness he is bound, but through God's mercy he will be unbound, if he merit his liberation from God. 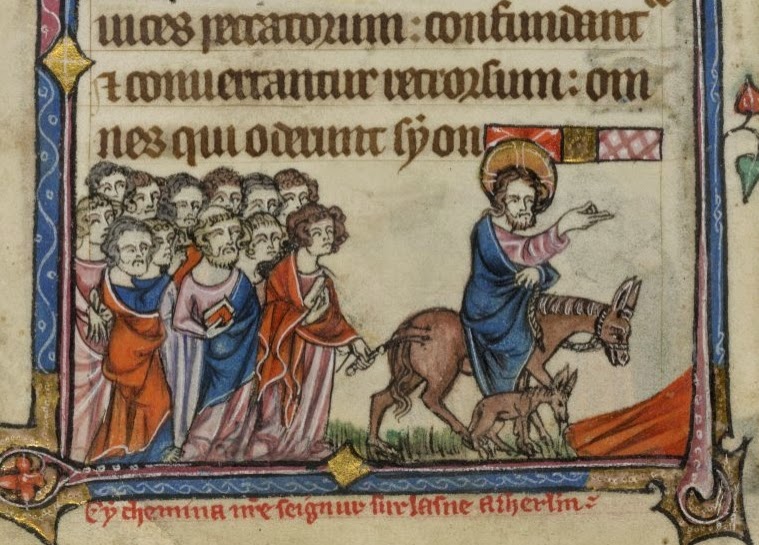 The people who cast their garments under the feet of the ass are the martyrs, who for the faith of Christ gave their own bodies to torments. Some were burned by fire, some drowned in the sea, and killed with various tortures; they gave us an example that we should not, for any persecutions or hardships, forsake our faith and turn away from Christ, any more than they did. Many a man is accounted a Christian in peace, who would very quickly deny Christ if he were sentenced to the fate to which the martyrs were sentenced; his Christianity is not praiseworthy. But a man's Christianity is praiseworthy who will not, for any persecution, turn away from Christ, not for sword, nor for fire, nor for water, nor for hunger, nor for chains, but ever holds to his faith with the praise of God to the end of his life.

Those who cut down the branches of trees and prepared Christ's way with them are the teachers in God's church, who pluck the sayings of the apostles and their successors, and with them direct God's people to the faith of Christ, so that they may be prepared for his way. 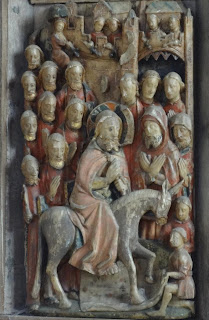 The entry into Jerusalem in alabaster, from Haddon Hall 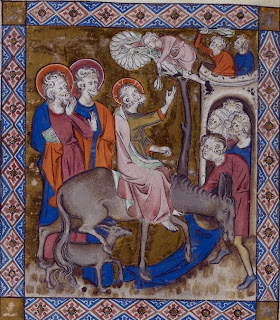 The entry into Jerusalem, BL Royal 2 B VII
Posted by Clerk of Oxford at 11:14 am

A diffeent (and very festive) tradition. Greetings from Seville, we're about to enjoy it again in a few hours.
http://www.youtube.com/watch?v=1S4ck7LBIIw

That's great - what a lovely tradition! Thanks for sharing!