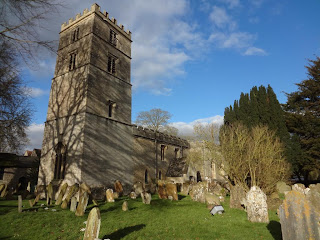 Yarnton is a village near Oxford, which in the eighteenth century had the good fortune to have an antiquarian benefactor: William Fletcher, Mayor of Oxford, who collected a large amount of medieval religious art from churches across Europe and presented it to the church at Yarnton.  The little church is a museum of assorted medieval fragments, mostly stained glass in varying states of completeness, but also a series of 15th-century alabaster panels which Fletcher obtained after they were found during excavations at St Edmund Hall, Oxford.  There were six panels, but only four are now at Yarnton - one is in the British Museum, another at the V&A.  (The British Museum one shows St Catherine of Alexandria, visible here; the V&A may be this or this one, I'm not quite sure).

The four remaining panels have been set under the east window, behind the altar, which makes them difficult both to see and to photograph, but I did my best - they're worth the effort!  Lacking paint and gilding, they don't have the breathtaking quality of the extraordinary alabaster reredos at Haddon Hall, but you can see the ghost of what it might once have been.  English alabaster of this date is just glorious, and in these Passion scenes, deeply moving too.

It's also worth linking here to my (sadly not very good) pictures of a painted reredos in Norwich Cathedral, which shows similar scenes.

The first panel is an Epiphany scene - unseasonal, but I can't resist posting it anyway: 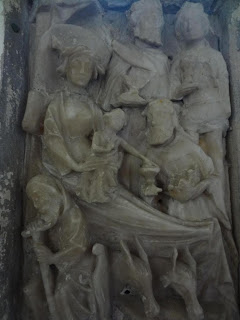 The animals are delightful: 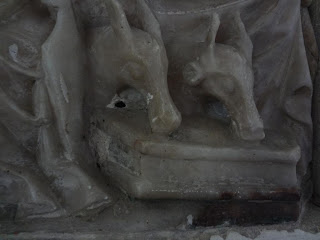 The Virgin stately and, apparently, beturbaned: 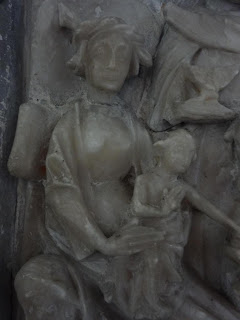 One king has politely removed his crown, and holds it on his knee: 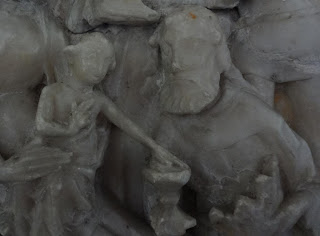 The other kings hover in the background: 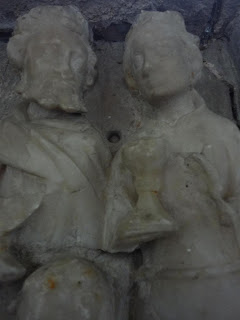 And St Joseph rests on his staff (compare these manuscript images I posted the other day): 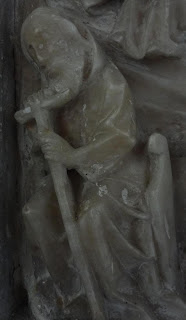 Now to something more appropriate for Holy Week.  The scene of the arrest of Christ is perhaps the best of them all; it's like a ghost of a Giotto fresco: 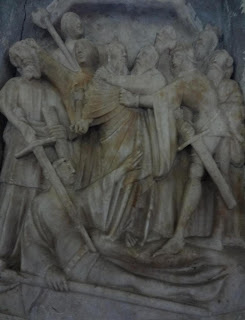 The interaction between the various heads and arms and weapons is so dramatic, and the grasping hands (which are tiny - each less than a centimetre high) particularly exquisite: 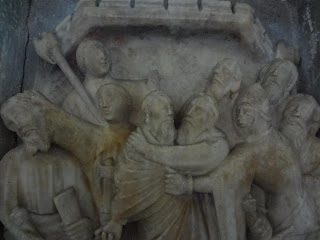 In the same scene at Haddon Hall, Christ is looking away and out of the picture, but here he and Judas are eye-to-eye: 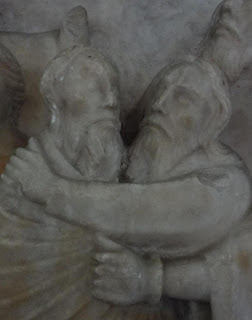 In the lower corner is the high priest's servant, St Peter's sword at his ear: 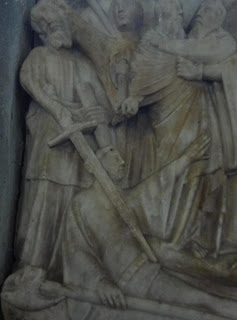 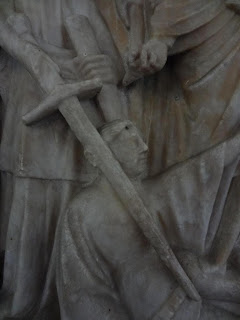 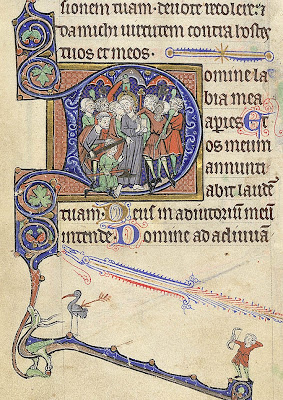 The next Yarnton panel depicts Christ carrying the cross: 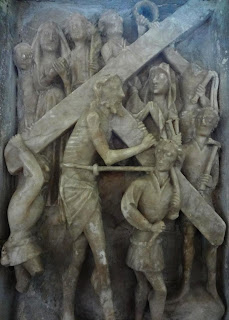 His ribs and fingers are carefully articulated: 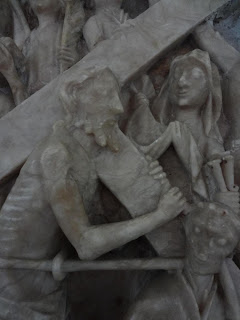 Note the woman holding up a cloth for Christ, and behind him, women clutching their hands in grief: 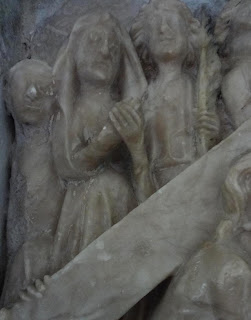 'A large number of people followed him, including women who mourned and wailed for him. Jesus turned and said to them, “Daughters of Jerusalem, do not weep for me; weep for yourselves and for your children...'

On the right, men are holding nails, a hammer and a whip (and again, compare Haddon Hall): 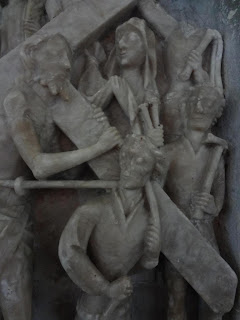 The last scene shows Mary cradling the body of Christ: 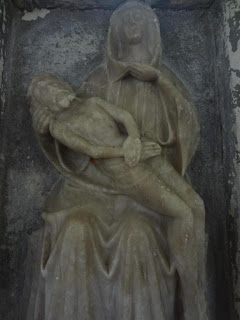 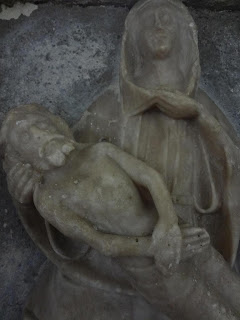 The pieta was a fairly new subject in art at this date, and here it dovetails beautifully with the Epiphany scene in the first panel, where Mary proudly holds her son on her lap. It's the visual equivalent of the near-contemporary poem which begins:

Of alle women that ever were borne
That berys childur, abyde and se
How my son liggus me beforne
Upon my kne, takyn fro tre.
Your childur ye dawnse upon your kne
With laghyng, kyssyng, and mery chere:
Behold my childe, beholde now me,
For now liggus ded my dere son, dere!
Posted by Clerk of Oxford at 5:15 pm

Thanks for presenting such a wonderful gem! The humanity depicted both in carvings and in verse ought to be presented to anyone who fails to understand medieval approaches to grief and what we might call realism. Some of my students would possibly benefit greatly from this.

Is it easy to get from Oxford to Yarnton? (I'm asking because my experience with transportation in Yorkshire is that not everything in that department is as easy as it first appears.)

Yes, you're quite right - the humanity in these scenes is what's most striking about them. Although so conventional in design, they're full of real feeling, and very touching.

It's surprisingly easy to get from Oxford to Yarnton - there's a direct and regular bus (the bus services in Oxfordshire are usually pretty good). I do recommend a visit!

Come to think of it, I've also come across a similar humanity - I'm tempted to call it Gothic humanity for want of a better phrase - in hagiographies from the High Middle Ages. Both Aelred of Rievaulx and Matthew Paris - i.e. both in Latin and Anglo-Norman - have interjections and minor dirges in which they lament the state of the crippled whom Edward the Confessor heals.

I'm not suggesting a correlation between the focus on suffering in what we know as Gothic art and literature from roughly the same period, but I find it nonetheless very intriguing that so much attention is brought to the aspect of suffering. However, you're more experienced in this than I am, and can probably tell whether this goes further back than the 12th century.

And thanks for directions, if I ever get to Yarnton I'll let you know.

In the Pieta scene, did anyone notice that the figure of Christ is arranged in the same position as the Shroud of Turin? Striking!

I believe the'woman' holding a piece of cloth in the route to Calvary is Saint Veronica.

She was popularly supposed to have wiped Christ's face with her veil, which received a miraculous imprint which remained forever visible.