St Ethelburga and the Nuns of Barking

St Æthelburh (or Ethelburga), whose feast is 11 October, is one of a significant number of female religious leaders who played an important role in the first century of the Anglo-Saxon church. She was the first abbess of Barking Abbey in Essex, which was founded for her by her brother, St Earconwald, in the late 660s or early 670s. Earconwald also founded Chertsey Abbey in Surrey, and later became bishop of London.

Not much is known about the family origin of these two saintly siblings, but their names suggest they might have been connected to the Kentish royal family; Ethelburga shares a name with St Æthelburh of Kent, the daughter of King Ethelbert who became queen of Northumbria and abbess of a similar community at Lyminge, near Folkestone. Her brother's name-element earcon, as in Arkenstone, is found in the names of a king of Kent and his daughter (names and name-elements were commonly repeated in Anglo-Saxon royal families). Almost everything we know about the two of them comes from Bede, who says a little about Earconwald, and much more about Ethelburga, in Book 4 of his Historia Ecclesiastica (chapters 6-9):

Both before and after his consecration as bishop, Earconwald is said to have lived so holy a life that heaven still affords proof of his virtues. To this day, the horse-litter in which he travelled when ill is preserved by his disciples, and continues to cure many folk troubled by fever and other complaints. Sick people are cured when placed under or against the litter, and even chips cut from it bring speedy relief when taken to the sick.

Before he became bishop, Earconwald had built two well-known monasteries, one for himself and the other for his sister Ethelburga, and had established an excellent regular discipline in both houses. His own monastery stood by the River Thames at Cerotaesei - meaning, Cerot's island - in the district of Surrey. The convent where his sister was to rule as mother and instructress of women devoted to God was at a place called In-Berecingum in the province of the East Saxons. Entrusted with the affairs of this convent, she always bore herself in a manner worthy of her brother the bishop, upright of life and constantly planning for the needs of her community, as heavenly miracles attest.

In this convent many proofs of holiness were effected, which many people have recorded from the testimony of eyewitnesses in order that the memory of them might edify future generations; I have therefore been careful to include some in this history of the Church...

When Ethelburga, the devout Mother of this God-fearing community, was herself about to be taken out of this world, one of the sisters whose name was Tortgyth saw a wonderful vision. This nun had lived for many years in the convent, humbly and sincerely striving to serve God, and had helped the Mother to maintain the regular observances by instructing and correcting the younger sisters. In order that her strength might be 'made perfect in weakness' as the Apostle says, she was suddenly attacked by a serious disease.  Under the good providence of our Redeemer, this caused her great distress for nine years, in order that any traces of sin that remained among her virtues through ignorance or neglect might be burned away in the fires of prolonged suffering. Leaving her cell one night at first light of dawn, this sister saw distinctly what appeared to be a human body wrapped in a shroud and shining more brightly than the sun. This was raised up and carried out of the house where the sisters used to sleep. She observed closely to see how this appearance of a shining body was being raised, and saw what appeared to be cords brighter than gold which drew it upwards until it entered the open heavens and she could see it no longer. When she thought about this vision, there remained no doubt in her mind that some member of the Community was shortly to die, and that her soul would be drawn up to heaven by her good deeds as though by golden cords. And so it proved not many days later, when God's beloved Ethelburga, the Mother of the Community, was set free from her bodily prison.  And none who knew her holy life can doubt that when she departed this life the gates of our heavenly home opened at her coming.

In the same convent there was also a nun of noble family in the world, who was yet more noble in her love for the world to come.  For many years she had been so crippled that she could not move a single limb; and hearing that the venerable abbess' body had been carried into the church until its burial, she asked to be carried there, and to be bowed towards it in an attitude of prayer.  Then she spoke to Ethelburga as though she were still alive, and begged her to pray to God on her behalf, and ask him of his mercy to release her from her continual pain.  Her request received a swift reply; for twelve days later she was set free from the body, and exchanged her earthly troubles for a heavenly reward.

Three years after the death of the abbess, Christ's servant Tortgyth was so wasted away by the disease that I mentioned earlier that her bones scarcely held together, until finally, as death drew near, she lost the use of her limbs and even of her tongue. After three days and nights in this condition, she was suddenly refreshed by a vision from heaven, opened her eyes, and spoke.  Looking up to heaven, she began to address the vision that she saw: "I am so glad that you have come; you are most welcome." She then remained silent for a while, as if awaiting an answer from the person whom she saw and spoke to; then, seeming a little displeased, she said, "This is not happy news." After another interval of silence, she spoke a third time: "If it cannot be today, I beg that it may not be long delayed." Then she kept silent a little while as before, and ended: "If this decision is final and unalterable, I implore that it may not be delayed beyond the coming night."  When she had finished, those around her asked her to whom she had spoken.  "To my dearest Mother Ethelburga," she replied; and from this they understood that she had come to announce that the hour of her passing was near.  So after a day and a night her prayers were answered, and she was delivered from the burden of the body and entered the joys of eternal salvation. 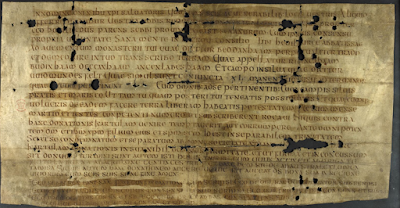 Bede was writing within half a century of Ethelburga's death, and his source for all this was probably a now-lost account of the miracles of Ethelburga written at Barking. Several other miracles are also recorded, relating to an outbreak of plague in the community, but I liked the description of these three linked, peaceful deaths. In Ethelburga's time Barking was a double monastery (for men and women), as was common in the earlier Anglo-Saxon period, but it's the bonds of community and affection between Ethelburga and her nuns which emerge most memorably from Bede's account - 'golden cords' of another kind than those Tortgyth saw in her vision.

Barking Abbey grew to be one of the most important monasteries in the country, and at the time of the Dissolution it was the third richest nunnery in England. It was closely associated with a number of powerful royal and noble women, including the wives and sisters of kings - and even Thomas Becket's sister. The Abbess of Barking was not only an important landowner but a baroness in her own right, required to supply the king with soldiers in wartime like any secular lord. Barking also had a strong literary and educational tradition which continued throughout the medieval period: learned authors such as Aldhelm (in the 8th century) and Goscelin (in the 11th) wrote Latin works for the nuns of Barking, and several nuns composed their own poetry and prose. Perhaps the first female author from England whom we can name was Clemence of Barking, who wrote a Life of St Catherine in Anglo-Norman in the twelfth century; a nun of Barking (either Clemence or someone else) also wrote a Life of Edward the Confessor around the same time. Jocelyn Wogan-Browne has described Barking as "perhaps the longest-lived, albeit not continuously recorded, institutional centre of literary culture for women in British history". And it all began with Ethelburga. 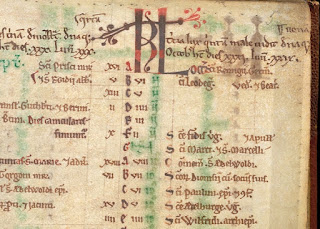