The Twelve Ages of Man

When I was at primary school in the mid-1990s, we used to sing a hymn of which I now remember only the first verse:

January brings the snow
And the white frost glistens,
I'm a child, full of love,
Speak, Lord, and I'll listen.

Or at least, it went something like that; my memory of the words is a bit hazy, and I mostly remember the jaunty tune and the excessive sibilant emphasis my classmates liked to put on the first syllable of glisss-tens. (Children are strange.)  I don't remember any more of the verses, but the basic idea was to equate the months of the year with the stages of human life.  I can't remember if there really were twelve verses, and for once the internet can't help me dredge my memory, because although I found the song it's in copyright and the lyrics aren't online.  I do remember it was a pretty dreadful song, though, like almost everything we learned to sing in primary school, whether 'cords that cannot be broken' or 'jet planes meeting in the air to be refueled'; if those references don't mean anything to you, I envy your education!

(Isn't it one of the unfairnesses of human existence that the period of life when things are most easily absorbed into the memory is also the period when one is exposed to the greatest amount of rubbish? So many wonderful poems I have attempted to memorise have faded helplessly from my mind, but the array of banal songs I learned in primary school will apparently never leave me.)

Anyway, the point of this little trip down memory lane is that today I found a medieval poem which reminded me of that January song. The months/ages of man thing is fairly common in literature and art, a subset of the ubiquitous 'ages of man' theme perhaps most famous from Shakespeare's 'All the world's a stage'. I found this particular instance in the book Monumenta ritualia ecclesiae Anglicanae, a volume I've grown to love (it contains all kinds of miscellaneous and fascinating information about the pre-Reformation church, including lots of the Middle English prayers I've been posting here over the past few months). The editor attributes this poem to a sixteenth-century Prymer, and a related book now in Canterbury Cathedral library can be seen on their website here.

January.
The first vi yeres of mannes byrth and aege,
May well be compared to Ianyuere:
For in thys month is no strength, no courage,
More than in a chylde of the aege of vi yere.

Apryll.
The next vi yere maketh foure and twenty,
And figured is to ioly Apryll :
That time of pleasures man hath moost plenty,
Fresshe and louynge his lustes to fulfyll.

June.
In June all thyng falleth to rypenesse,
And so dooth man at xxxvi yere olde,
And studyeth for to acquyre rychesse,
And taketh a wyfe to kepe his housholde.

July.
At xl yere of aege or elles neuer
Is ony man endowed with wysdome:
For than forthon hys myght fayleth euer,
As in July dooth euery blossome.

August.
The goodes of the erthe is gadred euermore
In August, so at xlviii yere
Man ought to gather some goodes in store,
To susteyne aege that than draweth nere.

Septembre
Lete no man thynke for to gather plenty
Yf at liiii yere he haue none:
No more than yf his barne were empty
In Septembre, whan all the corne is gone.

Decembre.
The yere by Decembre taketh his ende,
Aad so dooth man, at thre score and twelue:
Nature wyth aege wyll hym on message sende,
The tyme is come, that he must go hym selue. 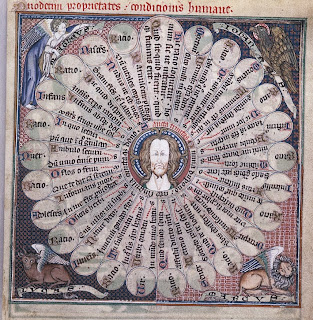 The first six years of man's birth and age,
May well be compared to Januare:
For in this month is no strength, no courage,
More than in a child of the age of six year.

The next six years is like February:
At the end therof beginneth the spring.
At that time children are most apt and ready
To receive chastisement, nurture, and learning.

March betokeneth the six years following,
Arraying the earth with pleasant verdure:
That season youth careth for nothing,
And without thought he has his sport and his pleasure.

The next six year makes four and twenty,
And figured is to jolly April:
That time of pleasures man hath most plenty,
Fresh and loving his desires to fulfill.

As in the month of May all thing is in might,
So at thirty years man is in chief lykyng: [greatest happiness, good estate]
Pleasant and lusty to every man's sight,
In beauty and strength to women pleasing.

In June all thing falleth to ripeness,
And so doth man at thirty-six years old,
He studieth for to acquire riches,
And taketh a wife to keep his household.

At forty years of age or else never
Is any man endowed with wisdom:
For from then on his might faileth ever,
As in July doth every blossom.

The goods of the earth are gathered evermore
In August, so at forty-eight year
Man ought to gather some goods in store,
To sustain him in old age that then draws near.

Let no man think for to gather plenty
If at fifty-four years he has none:
No more than if his barn were empty
In September, when all the corn is gone.

By October betokeneth sixty year,
When age in haste doth man assail,
If he have aught, than it doth appear [= is fitting]
To live quietly after his travail.

When man is at sixty-six years old
Which likened is to barren November,
He waxeth unwieldy, sickly, and cold,
Then his soul's health it is time to remember.

The year by December taketh his end,
And so doth man, at three score and twelve.
Nature and age will him one message send:
The time is come that he must go himself. 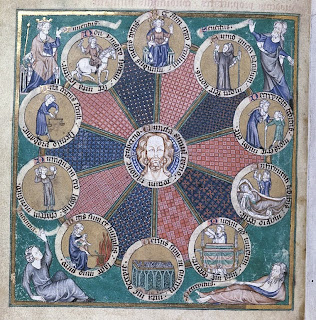 Ten Ages of Man, from British Library Arundel 83 f. 126v
For some reason, I find this poem a little bit funnier than I think it's supposed to be - partly because it reminds me of that ridiculous hymn, and partly because it's so specific about the ages at which one ought to do things.  Did you know that thirty-six was the optimum age to get married?  And that if you're not wise at forty, you never will be?  (I feel like marriage and the pinnacle of wisdom ought to be more separated in time; one leads to the other, I would think.) And at fifty-four it's too late to save for your retirement, sorry...

But it's good news if you're still on the young side: since the recent influx of undergraduates to Oxford has made me start to feel elderly, it's a relief to know I'm still in the Maytime of my life. It makes up for having spent so much of the February singing awful hymns!
Posted by Clerk of Oxford at 12:29 pm

Okay, good to know I'm in the August of my life. Thanks for jogging the memory of primary school songs. I must have been lucky - we had George Herbert and 'Daisies are our silver, buttercups are gold; this is all the treasure we can have or hold.'
Still mist up when I write those words.
Love this blog.

Thank you! I had to look that song up - it's lovely. And the August of life sounds quite pleasant - in fact all the months do until November/December, so that's a comforting thought for all of us!

As in the first comment, I am in the August of my life (very late August!) and remember with gratitude and affection George Herbert's hymns among many others in school.'Immortal, Invisible' was another favourite (we had it in church yesterday too, and thanks to school I didn't need to put on my reading glasses to see the words). I hated school on the whole but loved hymns..... and Songs of Praise had a pretty good selection.

.....and by the way, if you want a good take on the twelve months of the year try the Victorian poem 'January brings the snow' and then find the Flanders and Swann version.

Ah, my mother treasures her school copy of 'Songs of Praise', and she taught me some of those hymns with great affection. I'll look for 'January brings the snow' - and for the Flanders and Swann version too!