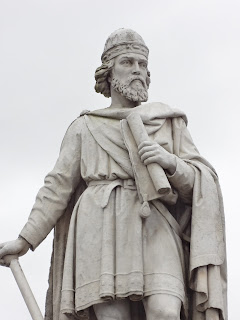 Alfred at Wantage, his birthplace

Today is the anniversary of the death in 899 of Alfred the Great, one of the most attractive figures of Anglo-Saxon history. There are all sorts of reasons to love Alfred, 'England's darling' (as he is called in some twelfth-century sources): defender of his kingdom against the Vikings, maker of laws, patron of the church - and more. Of course it's possible to overdo the Alfred-worship; it's unfortunate that people sometimes have the impression that he was the only good king in Anglo-Saxon history, just because he's the most famous one. But it's impossible not be impressed by Alfred's educational and literary interests, and fans of Anglo-Saxon literature have much to thank Alfred for. Any competent king might win battles and make good laws - but how many rulers devote themselves, in the middle of wartime, to the education of their people, and the translation of literary texts?

Alfred believed that learning in England was in a poor state after the depredations of Viking attacks, and there were too few educated people to hold up literacy in the church and society at large. He approached this problem by inviting foreign scholars to come and help him revive learning in England, and he arranged for the translation of - or perhaps even translated himself - a range of religious and philosophical texts into English: Gregory the Great’s Pastoral Care and Dialogues, Boethius’ The Consolation of Philosophy, Augustine’s Soliloquies, the first fifty Psalms, and Bede’s Ecclesiastical History. He also probably encouraged the writing of the Anglo-Saxon Chronicle. He believed these were the books 'most necessary for all men to know', and he wanted people to be able to read them in their own language. Let's hear from Alfred in his own words (from his famous Preface to his translation of Gregory the Great's Pastoral Care):


You can see a manuscript of this text here. To translate it 'into the language we can all understand':


It has very often come into my mind what wise people there once were among the English, both in sacred and secular states of life, and what a blessed time that was then among the English; how the kings who held power over the people in those days obeyed God and his ministers, and how they maintained their peace, their morality and their power within their borders, and also extended their kingdom beyond them, and how they prospered both by war and by wisdom; and also of those in holy orders, how enthusiastic they were about both teaching and learning, and about all the acts of service that they ought to do for God; and how men from abroad sought wisdom and instruction here in this land, and how we now have to get them from abroad if we want to have them. Learning had so completely declined among the English that there were very few on this side of the Humber who could understand their services in English, or could translate a letter from Latin into English; and I think there were not many beyond the Humber, either. There were so few of them that I cannot even think of a single one south of the Thames, at the time when I became king. Thanks be to Almighty God that we now have any supply of teachers at all! And so I ask you to do what I believe you wish to do: that you disengage yourself from worldly matters as often as you can, so that wherever you can make use of that wisdom which God gave you, use it. Consider what punishments came upon us in this world when we neither loved wisdom in any way ourselves, nor passed it on to others. Then we loved only the name of being Christians, and very few loved the practices.

When I remembered all this, then I also remembered how I had seen, before it was all ravaged and burnt, how the churches throughout all England stood filled with treasures and books, and there were also a great many of God's servants; they got very little benefit from those books, for they did not understand anything in them, and could not, because they were not written in their own language. It was as if they said: 'Our elders, who once held these places, loved wisdom, and through it they obtained wealth and left it to us. Here one may still see their footprints, but we cannot follow after them; and so we have now lost both the wealth and the wisdom, because we would not bend down our minds to study their tracks.'

When I remembered all this, then I wondered very much that the good and wise people who there formerly were among the English, who had learned all those books to the full, did not translate any of them into their own language. But I answered myself at once, and said: 'They did not think that people would ever become so careless, or that learning would decay so much; they chose not to do it, thinking that there would be more wisdom in the country, the more languages we knew.'

Then I remembered how the Law was first established in the Hebrew language, and afterwards, when the Greeks learned it, they translated it all into their own language, and also all the other books [of the Bible].  And later in the same way the Romans, when they had learned them, translated them all through wise interpreters into their own language; and all other Christian peoples have also translated some part of them into their own language.  Therefore it seems better to me, if it seems so to you, that we too translate certain books - those which are most necessary for all men to know - into the language we can all understand... When I remembered how knowledge of Latin had formerly decayed throughout England, and yet many knew how to read written English, then I began among the other sundry and manifold cares of this kingdom to translate into English the book that is called in Latin 'Pastoralis', and in English "Shepherd-book," sometimes word for word, and sometimes sense for sense...


This is wonderful: an explanation of the advantages of translation, an assertion of the value of wisdom and learning, and a programme for the production of vernacular literature. It's fitting that this is one of the pieces of prose often set as translation practice for people learning Old English, and it has something to say not only to translators and teachers of language (Old English or otherwise) but to teachers and learners of all kinds. In another of his prefaces Alfred says that one of the challenges of translation is that you can't convey everything of the original text - he compares it to going out gathering wood in a forest, and only being able to bring back as much as you can carry, even if you can see many things it would be useful to have with you at home. One of the things I would have liked to 'carry home' in translating the above Preface is the similarity between the two verbs in the phrase we hit nohwæðer ne selfe ne lufodon ne eac oðrum monnum ne lefdon, 'we neither loved [wisdom] in any way ourselves, nor passed it on to others'. And again: Ure ieldran, ða ðe ðas stowa ær hioldon, hie lufodon wisdom, ond ðurh ðone hie begeaton welan ond us læfdon, 'Our elders, who once held these places, loved wisdom, and through it they obtained wealth and left it to us'. The likeness between those verbs lufodon and lefdon implies that there is an intimate connection between loving knowledge and leaving it to someone else ('leave' in the sense of 'pass on, bequeath'), and we have a duty to do both. Which is why Alfred translated St Gregory in the ninth century, and why we translate Alfred today. 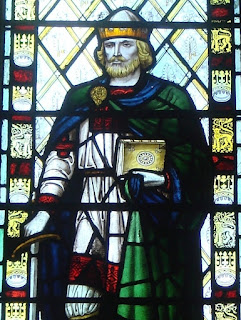 Alfred (Wells Cathedral)
Posted by Clerk of Oxford at 5:20 pm

Email ThisBlogThis!Share to TwitterShare to FacebookShare to Pinterest
Labels: Alfred the Great, Anglo-Saxons

I had just happened to have finished The White Horse King by Benjamin Merkle. Alfred sounds so perfect you'd almost think he was King Arthur. It is nice to know that there were a few kings who were actually good role models.