'Ceasing from the voice of joy and gladness': Ælfric's Homily for Septuagesima 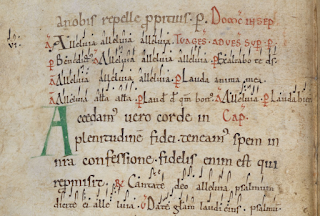 Some last Alleluias, from the liturgy for the eve of Septuagesima in an Anglo-Saxon Missal
(BL Harley 2961, f. 41v)

Today, nine weeks before Easter, is traditionally Septuagesima Sunday, the beginning of a period of preparation for Lent. One of its most distinctive features was the custom of ceasing to sing 'Alleluia' at mass, a practice referred to in medieval England as 'locking the Alleluia'. The word was symbolically locked away, to be unlocked again amid the celebration of Easter - then the word was imagined to be released from its captivity, just as Christ would break out of the tomb and human beings would be liberated from captivity to their sins.

The tenth-century English homilist Ælfric wrote a sermon for Septuagesima in which he discusses the reason for this custom, the significance of observing a period of seventy days, and the parallel with the captivity of the Israelites in Babylon. During that period, he says, the Israelites 'ceased their song of joy and gladness', and so the church in emulation ceases to sing 'Alleluia'. The first part of the sermon deals with the Gospel for the day (the parable of the workers in the vineyard - you can read the whole thing here) but he concludes by saying:


'We wish to speak to you about this present season, why the holy congregation in God’s church omits ‘Alleluia’ and ‘Gloria in excelsis Deo’, from this present day until the holy season of Easter. There was a wise teacher named Amalarius, who wrote a book about the church’s customs and what the ceremonies of God’s servants symbolise through the course of the year; and he said about this present season, which is called Septuagesima, that it acts as a token of the seventy years for which the people of Israel served the king of Babylon in captivity. Septuagesima is the number 'seventy'. The season begins on this Sunday, nine weeks before Easter, and ends on the Saturday in Easter week; from now until that day are counted seventy days, and the people of Israel, for their sins and transgressions, were taken into captivity and lived for seventy years in slavery to Babylon, without joy and bliss. Now God’s church keeps this period of seventy, by choice, for their sins, just as Israel of old was forced to keep it in captivity, until merciful God rescued them after their tribulations and led them to their homeland.

The prophet Jeremiah prophesied about the people of Israel that during that period of seventy years they should cease from the voice of joy and gladness, the voice of the bridegroom and the bride. Now in emulation of that, God’s servants leave the heavenly songs of praise, ‘Alleluia’ and ‘Gloria in excelsis Deo’, in this period of Septuagesima, because it is fitting for us that from this present day we prepare ourselves voluntarily with a degree of strictness for the spiritual battle, as the liturgy of the church exhorts us to sorrow and repent of our sins. First in the Office of the Mass we sing ‘Circumdederunt me gemitus mortis’, ‘The mournings of death surrounded me, and the pains of hell surrounded me, and I cried to the Lord in my trouble and he heard my voice from his holy temple.’ Then in the Collect of the Mass we say, ‘Qui juste pro peccatis nostris affligimur’, that is, ‘We who are justly afflicted for our sins.’ Again, the apostle in the Epistle says, ‘Every one of those who strives in battle withholds himself from all things.’

Truly the liturgy of the day shows that from this day until Easter is our season of mourning and repenting for our sins with a degree of strictness. ‘Alleluia’ is a Hebrew word – which in Latin is ‘Laudate Dominum’ – and no language is as elevated as Hebrew. Now we leave that elevated language in our Septuagesima, and say in Latin, ‘Laus tibi, Domine, Rex aeterne gloriae’, that is, ‘Praise be to thee, Lord, King of eternal glory.’ We show by our humble Latin speech that we should incline to a humbler way of living in this season. ‘Alleluia’ is, as we said, a heavenly song; as the Apostle John said, he heard great voices in heaven, like the music of trumpets, and they sang ‘Alleluia’. ‘Gloria in excelsis Deo’ sang the angels, when Christ became incarnate in flesh in this world. Now we leave the heavenly songs of praise in our season of repentance, and we pray with true humility to the Almighty, that we may see his heavenly Eastertide, after the general resurrection, in which we will sing ‘Alleluia’ to him eternally without ceasing. Amen.' 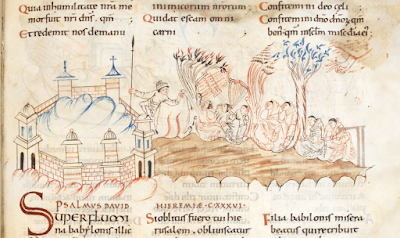 It's interesting to see this opinion on the relative holiness and humbleness of Hebrew and Latin! This is Ælfric at his best as a teacher, clearly and concisely explaining to his congregation the liturgical practices associated with Septuagesima and the reasons for them. There's a good deal of learning here, lightly worn, as Ælfric moves confidently between Latin, Ebreisc and English, between the texts of the liturgy, the Old Testament, and the New. His last paragraph touches on a similar idea to the Septuagesima hymn 'Alleluia dulce carmen' (glossed as 'Alleluia, myrige leoþ' in one Anglo-Saxon manuscript of hymns), which J. M. Neale translated as 'Alleluia, song of sweetness':

'Alleluia', song of sweetness,
voice of joy that cannot die;
'alleluia' is the anthem
ever raised by choirs on high;
in the house of God abiding
thus they sing eternally.

'Alleluia' thou resoundest,
true Jerusalem and free;
'alleluia', joyful mother,
all thy children sing with thee;
but by Babylon's sad waters
mourning exiles now are we.

'Alleluia' cannot always
be our song while here below;
'alleluia' our transgressions
make us for awhile forgo;
for the solemn time is coming
when our tears for sin must flow.

Therefore in our hymns we pray thee,
grant us, blessed Trinity,
at the last to keep thine Easter,
in our home beyond the sky,
there to thee for ever singing
'alleluia' joyfully.

Septuagesima is not widely observed today, and the opportunities to sing this ancient hymn are therefore few. Hymns about hymn-singing are always interesting to me; the idea of singing together is a powerful image of unity, and in this case the practice of singing - and ceasing to sing - in concert with the Israelites is, as Ælfric explains, an important symbol of how the medieval church saw its relationship with its Jewish heritage. The practice of 'locking' the alleluia is a liturgical re-imagining of one of the most poignant laments in human history, a despairing question which for thousands of years has given voice to many different political and personal situations of loss, exile, and dispossession: 'how can we sing the Lord's song in a strange land?' For the medieval church, this question was interpreted as the cry of a universal experience of estrangement: all human beings are in exile and captivity on earth, longing for their home in heaven, and every year through Lent and Easter the church re-enacts its longed-for progression from exile to homecoming, from grief to joy.

Today is one of those occasions on which the modern church has chosen not to sing in harmony with its medieval forebears, but if you would like to make an exception, you can find the tune to 'Alleluia dulce carmen' here. 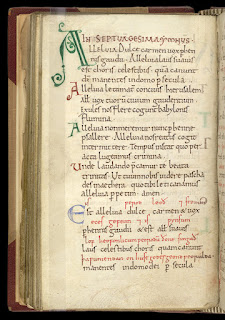 My COD tells me 'hosanna' comes from 'hosha'na' for hoshi'ahnna', 'save, pray!' - about which I once heard in a Palm Sunday sermon by Bishop Geoffrey Rowell.

Was there an Old English awareness of this, and attention to its meaning in connexion with why there was no 'locking the hosanna'?

Very interesting question! Yes, there was an awareness of the meaning - in Old English it's usually translated by an exclamation like 'sy hæl', literally 'be saved' (as in the greeting 'hail!'). It usually appears in the context of Palm Sunday homilies or English translations of the Gospel accounts of the entry into Jerusalem.

Thank you for this! Septuagesima is restored (though not yet it's proper lections) in the calendar of the Personal Ordinariates.

In American Lutheran churches--perhaps in other churches as well, but I am familiar with American Lutheran practice--Transfiguration Sunday (celebrated here on the last Sunday before Ash Wednesday) basically fills the function of Septuagesima. Most Lutheran churches here do not sing or say "Alleluia" during Lent, many ritually "bury" the Alleluia on Transfiguration Sunday, and "Alleluia dulce carmen," with an altered version of Neale's translation, is in our hymnals and sometimes sung on that day (I remember singing it growing up):