The Danish Conquest, 1000 Years, Part 5: Bargaining with the King

After the death of Svein Forkbeard on 3 February 1014 brought to a sudden end the Danish king's brief reign in England, what happened next? Events moved swiftly. The previous winter King Æthelred had been forced to flee England and seek refuge with his wife's family in Normandy, but, as the Anglo-Saxon Chronicle (D) tells us, he was about to get a second chance:


[In this year Svein ended his days at Candlemas, 3 February, and in that same year Ælfwig was consecrated Bishop of London at York on St Juliana's day, and the fleet then all chose Cnut as king. Then all the witan, ordained and lay, decided that King Æthelred should be sent for, and said that no lord was dearer to them than their natural lord, if he would govern more justly than he had done before. Then the king sent his son Edward here with his messengers, and sent greeting to all his people, and said that he would be a gracious lord to them and remedy all the things of which they disapproved, and everything which had been done or said against him should be forgiven, as long as they all turned back to him resolutely and without treachery. And full friendship was confirmed with words and pledges on both sides, and every Danish king was declared an outlaw from England forever. Then King Æthelred came in the spring home to his own people, and he was gladly received by them all.]


This short passage is in some ways one of the most surprising in the Chronicle. It's not unexpected, of course, that the witan, the king's counsellors, should want Æthelred to return once Svein was safely dead, but the idea of them making this agreement with their exiled king is fascinating - that they felt they could make terms for his return to England, and that he consented to rule 'more justly' and amend what they disliked! The witan were in a strong position to make such an agreement, because they could have chosen to reject Æthelred and submit to Cnut - although clearly they didn't want to, since Æthelred was their 'natural lord'. When a parliament has two potential kings to choose between, they can make their own terms. I wonder how we should interpret Æthelred sending his young son Edward (the future Confessor) with the negotiators - he can't have been more than twelve years old at this point, possibly younger, and it may be that his presence was supposed to be symbolic, a sign of hope for the future.

The universal peace and amity the Chronicle paints in this entry did not last very long. The statement that 'every Danish king was declared an outlaw from England forever' has considerable irony - not only of the historical variety (because less than three years later, Cnut was king of England) but also of a linguistic kind: outlaw is a loan-word from Old Norse, and the English counsellors were thus consciously or unconsciously using legal vocabulary the Danes had introduced to England as a weapon against the Danes themselves. However, as a strategy for peace-making this was a considerable step up from the St Brice's Day massacre - at least it's only Danish kings who are outlawed.

Given the date of Svein's death, it seems likely that the discussion and decision of the witan took place at the same time as the event mentioned in the same sentence in the Chronicle - the consecration of Ælfwig as bishop in York, on St Juliana's day, 16th February 1014. Svein's sudden death must have come as a great shock to everyone, but the witan would have had to act quickly: Cnut and his army were a still-present threat, and since Svein was buried in York, the Danes can't have been far from the city itself. Since we know the senior bishops were gathered at York on 16 February - most important among them Wulfstan, Archbishop of York - this may well have been the occasion on which they made their decision.

It has been plausibly argued* that this was also the occasion on which Wulfstan preached the first version of his famous Sermo Lupi ad Anglos, 'the Sermon of Wolf to the English'. One manuscript of the text tells us that it was preached in 1014, addressed to the English 'at the time when the Danes were greatly persecuting them'. There aren't many Old English texts for which we can make such a specific guess at a date (for many we can't even plausibly propose a century, let alone a day), so we should take the opportunity to mark the possible anniversary of this hugely significant sermon.

[*This argument is made by Jonathan Wilcox, 'Wulfstan's Sermo Lupi ad Anglos as Political Performance: 16 February 1014 and beyond', in Matthew Townend, ed., Wulfstan, Archbishop of York (Turnhout: Brepols, 2004), pp. 375-96. There are alternative theories about the textual transmission of the sermon and the priority of its different versions, but I find Wilcox's arguments convincing.]

In his sermon Wulfstan recounts the many disasters which have fallen upon the English nation through the attacks of the Danes, and describes a country which is, as he sees it, in total moral collapse: all normal social bonds - within families, within the church, and between lords and their followers - have broken down. He tells the English they have brought this catastrophe on themselves through their many sins, and the only remedy is to repent and seek the return of God's favour. You can read the whole sermon in Modern English here, although the power of Wulfstan's scathing rhetoric loses a lot in translation. Here's a particularly relevant extract:


[Therefore among us it is clear and obvious that before this we have more often sinned than we have atoned for it, and therefore much is attacking this nation. Nothing has prospered now for a long time, at home or abroad; but there was harrying and hunger, now burning and bloodshed in every place often and frequently, and theft and death, plague and pestilence, death of cattle and disease, malice and hatred, and the robbery of pillagers have sorely afflicted us, and excessive tax has greatly oppressed us, and bad weather has very often caused the failure of harvests. Therefore in this country, as it appears, there have now been many years of many injustices, and unstable loyalties everywhere among men. Now very often a kinsman will not defend a kinsman any more than he would a stranger, nor a father his son, nor sometimes a son his own father, nor one brother another. None of us has ordered his life as he ought to, neither the religious according to his rule nor the layman according to law. But lust has been a law to us all too often, and we have not kept the teachings or the laws of God or man as we ought to do. No one has acted loyally towards others as justly as he should, but almost everyone has betrayed and harmed others in words and deeds, and indeed almost everyone has attacked others with shameful assaults and with slander, and will do more, if he can.

For there are in this nation many betrayals against God and against the world, and also there are in this country many who betray their lords in various ways. And the greatest of all betrayals of a lord in the world is that a man betray the soul of his lord, and a very great betrayal of a lord it is also in the world, that a man betray his lord to death, or drive him living from the land, and both have come to pass in this country: Edward was betrayed, and then killed, and after that burned; and Æthelred was driven out of his land.]

Can't you see the witan wincing as they listened to that? Although his sentence is conveniently passive (Æþelred mon dræfde...), Wulfstan does not blame the Danes for driving Æthelred out of his own land the previous winter - he blames the audience of his sermon, who owed loyalty to their lord and betrayed him. Wulfstan's concern about the betrayal of oaths provides a helpful context for the bargaining and oath-making described in the Chronicle entry for 1014, where the agreement is fixed mid worde 7 mid wedde on ægþre healfe, 'with words and with pledges on both sides' - the chronicler himself slips in a formulaic, Wulfstanian alliterative doublet there. 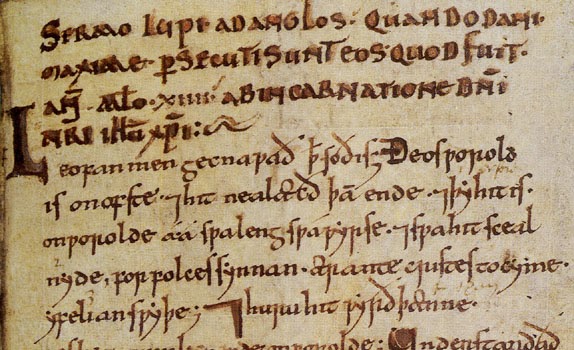 A manuscript of the Sermo Lupi, via wikipedia

The remainder of the Chronicle entry for 1014 describes how Cnut stayed in Gainsborough until Easter (which in 1014, as this year, fell late in April), until Æthelred drove him out. We can save that story until later in the year, except to note that at the end of that summer England suffered a terrible flood, which 'came further inland than it ever had before, and drowned many towns and a countless number of people'. And you thought this year's floods were bad...
Posted by Clerk of Oxford at 6:20 pm