A Miracle of St Eormenhild 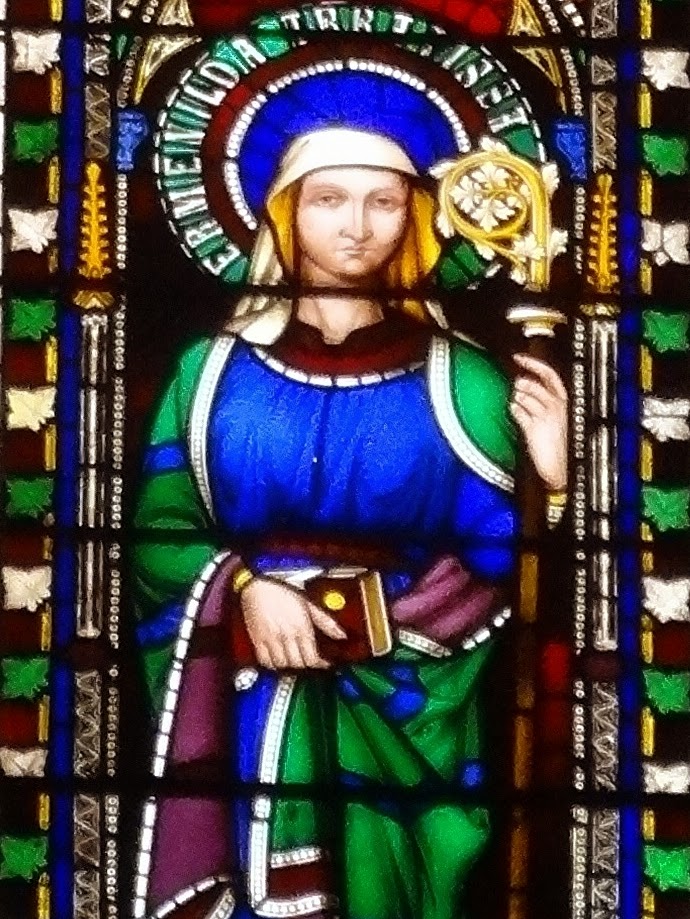 If you were a monk in eleventh-century Ely, you would today be celebrating the feast of St Eormenhild. Since you are not, you probably won't be. But you might like to read about her all the same.

Eormenhild, who died c.700, was born into the closely-linked nexus of royal families who ruled early Anglo-Saxon England. On her father's side she was a member of the royal family of Kent, descended from St Augustine's first convert, King Ethelbert (she was his great-granddaughter), and on her mother's side she was connected to East Anglian royalty, descended from King Anna, whose most famous progeny was Etheldreda of Ely (Eormenhild's aunt). Eormenhild extended these alliances by marrying the king of Mercia, Wulfhere, with whom she had two children. Many of the women in Eormenhild's extended family founded monasteries and entered religious life, with the result that they were commemorated as saints after death: Eormenhild, her mother Seaxburh, and her aunts Etheldreda and Wihtburh together comprised the female saints of Ely, while her daughter was St Werburh of Chester, and the Kentish royal family had its own saints in Æthelburh of Lyminge, Eanswythe of Folkestone (another of Eormenhild's aunts), and Mildred of Thanet and her mother and sisters (Mildred's mother was Eormenhild's cousin, if I'm keeping track correctly). The monasteries founded and ruled by these women, the wives and daughters of kings, formed an important network of secular and spiritual power in seventh-century England.

Eormenhild's life is summarised as follows in the 'List of saints' resting-places' in BL Stowe 944 (ff. 36-7): 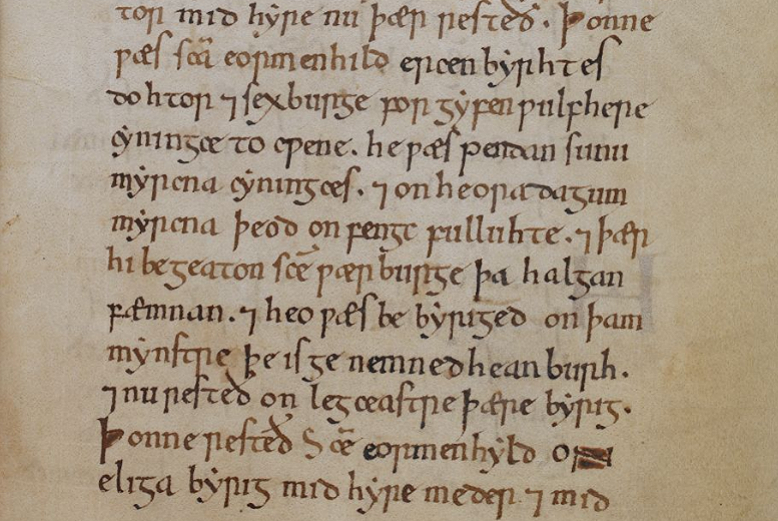 'St Eormenhild, daughter of Eorcenberht and Seaxburh, was given in marriage to be King Wulfhere's queen. He was the son of Penda, king of Mercia, and in their time the Mercian people received baptism. Their daughter was St Werburh the holy virgin, and she was buried in the minster which is called Hanbury, and now rests in the city of Chester. And St Eormenhild rests at Ely with her mother and with her aunt St Etheldreda, and her powers are often manifested there.'

After the death of her husband, Eormenhild retired to the abbey her mother Seaxburh had founded on the island of Sheppey in Kent, now Minster-in-Sheppey. (The Ely hagiographer describes this foundation as 'a paradise, a New Jerusalem'. I don't know if you've ever been to Sheppey, but that's a... generous description.) Eormenhild succeeded her mother as abbess when Seaxburh went to join St Etheldreda at Ely. She then subsequently went to Ely herself, and died and was buried there. Her cult was tiny, almost non-existent; there are no churches dedicated to her, and her name only appears in a handful of post-conquest calendars.

But there is a short text about her life and miracles, including the story about her which I mentioned the other day. It comes from a set of late eleventh-century lections for her feast, which may have been written by the hagiographer Goscelin.


We shall moreover add another tender and lovely miracle, one also so certain and clear because it happened to one of the brothers of that monastery before the very eyes of all the brothers dwelling there. He was the master of the boys in the school, who, fearing him, took refuge together at that kindly mother’s tomb crying out and begging for their deliverance, the day after the happy occasion of the feast of St Eormenhild which is by annual ritual worthily celebrated on the aforementioned Ides. The master pursued them, and with great indignation snatched them from there and beat them to his heart’s content, chiding them as they wept with these words of scorn: ‘Did you think you were always going to have St Eormenhild as patroness over your faults?’ After all this was over, the following night when he was lying on his bed, lo! mighty Eormenhild, mindful of his deeds, bound up the feet that were so quick to pursue and the hands so hasty to punish more tightly than any iron shackles or fetters could. For he suddenly suffered such contractions in both his hands and his feet, indeed in his whole body, that he could not even move. Or if he was obliged to go anywhere, he had to struggle in great agony on his knees instead of his feet, and his elbows instead of his hands. At this fear and trembling and confusion overtook him along with the bitter pain in his limbs as well as despair about his deliverance, so that the mental anguish alone would have been sufficient punishment. In the morning he summoned the boys to him, and humbly begged their forgiveness, and tearfully implored them to carry him to the tomb of the most holy lady Eormenhild, and there to plead for him. And they, although of feeble strength, carried him aloft, a wretched spectacle, into the presence of St Eormenhild, and there for some time begged for the restoration of his health, chanting psalms and praying, so that he who had come there in the hands of others went away again on his own feet.

So little is recorded about Eormenhild that this miracle is probably the invention of Goscelin, or whoever wrote these lections. The generic type of miracle, 'saint defends child from beating', is also attributed to St Dunstan, St Erkenwald, and others, and it's generally a sympathetic one (except in the version attached to St Erkenwald, where the saint lets a child escape punishment for not having done his homework; pretty sure I'm on the teacher's side in that one). So this is indeed a 'tender and lovely miracle', and I like that it paints Eormenhild as a kindly mother - appropriate for a saint who was, in fact, a mother. Interesting as the seventh-century saints of Ely are, their later hagiography is fairly turgid stuff, pages and pages of fulsome and repetitive praise for the virgin saints, with less enthusiasm for the women who had marred their virginity by getting married and having children (and I say this is as someone who is interested in both hagiography and virgin saints). But this miracle turns a 'negative' into a positive, by giving Eormenhild an opportunity to exercise her motherly care. 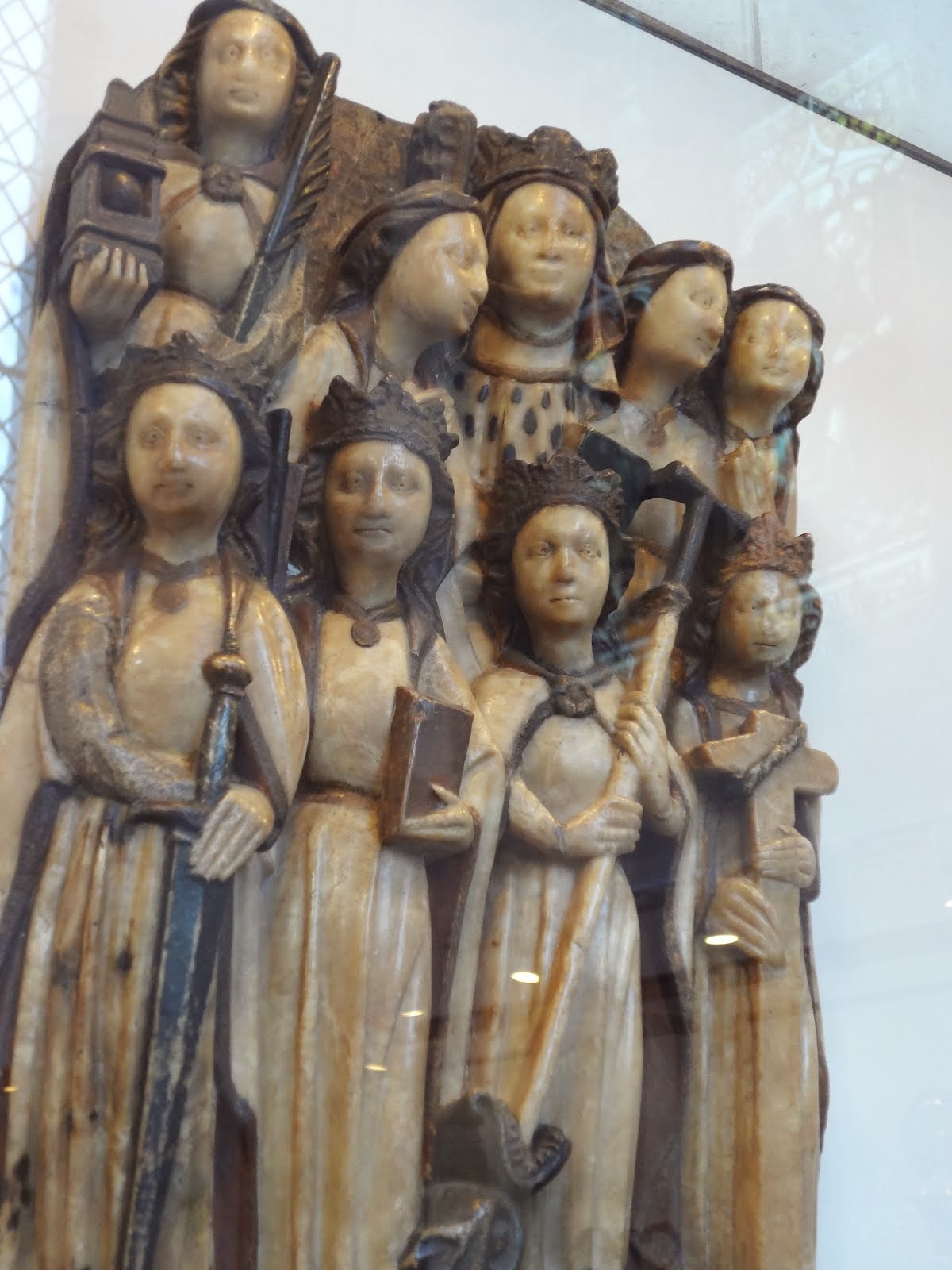