'In a green May unutterably blue' 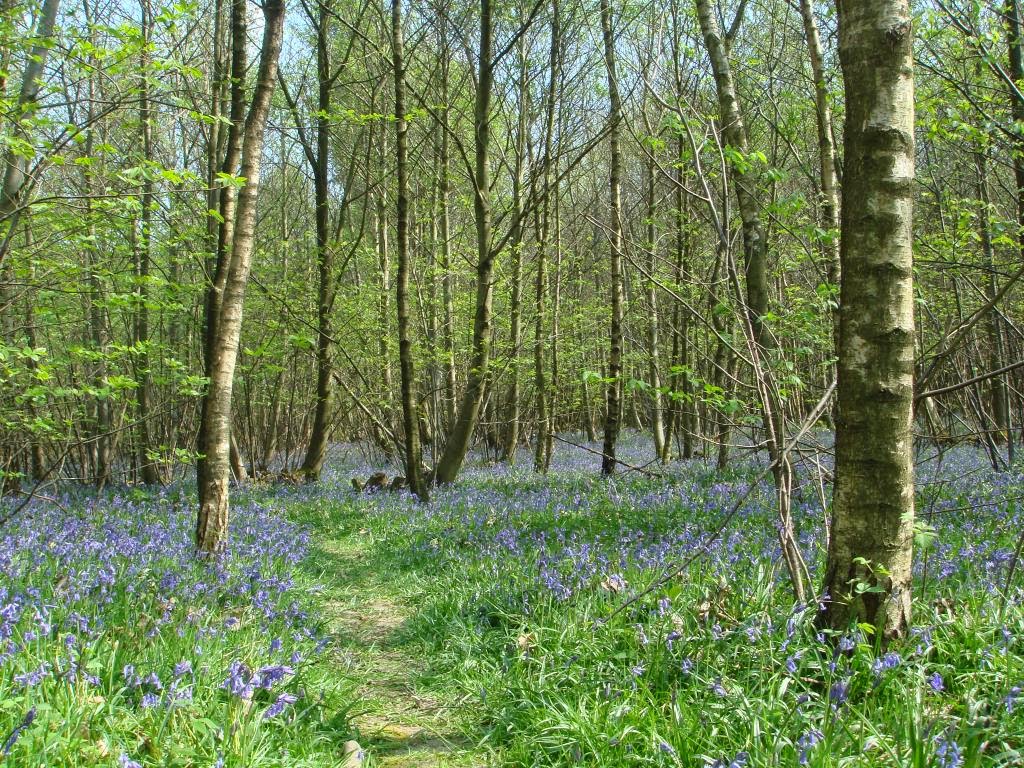 We stood upon the grass beside the road,
At a wood's fence, to look among the trees.
In windless noon the burning May-time glowed.
Gray, in young green, the beeches stood at ease.
Light speckled in the wood or left it dim:
There lay a blue in which no ship could swim,
Within whose peace no water ever flowed.

Within that pool no shadow ever showed;
Tideless was all that mystery of blue.
Out of eternities man never knew
A living growth man never reaped nor sowed
Snatched in the dim its fitness from the hour
A miracle unspeakable of flower
That tears in the heart's anguish answered to.

How paint it; how describe? None has the power.
It only had the power upon the soul
To consecrate the spirit and the hour,
To light to sudden rapture and console,
Its beauty called a truce: forgave: forgot
All the long horror of man's earthly lot,
A miracle unspeakable of flower
In a green May unutterably blue.

For what, for whom, was all the beauty spread,
This colour, that had power to dissolve
Man's fugitive dismays into resolve
And be a balsam upon hearts that bled?
In all the mile of marvel, what immense
Current of life had power so intense
To wrest such bounty out of sun and soil?
What starved imagination ached to feed?
What harassed heart implored for an assoil?

Who can behold it on this lonely hill,
Here in the one week when the wonder shows,
Here, where old silence waits on the wind's will,
Where, on the track, none but the postman goes,
Where upon mouse or bird the kestrel drops,
Or spotted 'pecker burrowing his bill
Furrows the bark, or the red squirrel hops
Or hunting vixen lifts a questing nose,
What other seer can the beauty thrill?

None, in the day; and, when the beauty dims,
When moonlight makes the still un-leafy tree,
A spell-bound ghost that cannot move his limbs,
What other passer can be here to see?
The new-come night-jar chirring on the branch?
The nightingale exulting in his hymns?
The wood-mice flitting where the moon-beams blanch?
The wind, in the few fir-trees, like a sea
On which the pale owl like a feather swims?

For none of these can such a marvel be.

Has it a source in a forgotten scene?
Is it a mark of vital methods taken,
Of choices made, at turning-points of Fate
Whether to know the Earth or seek the Queen?
Is it but yearly gladness of bonds shaken?
After a prison, an apparent gate?
Or is this miracle of blue and green
A symbolling of what it all may mean,
When the Queen comes and all we dead awaken? 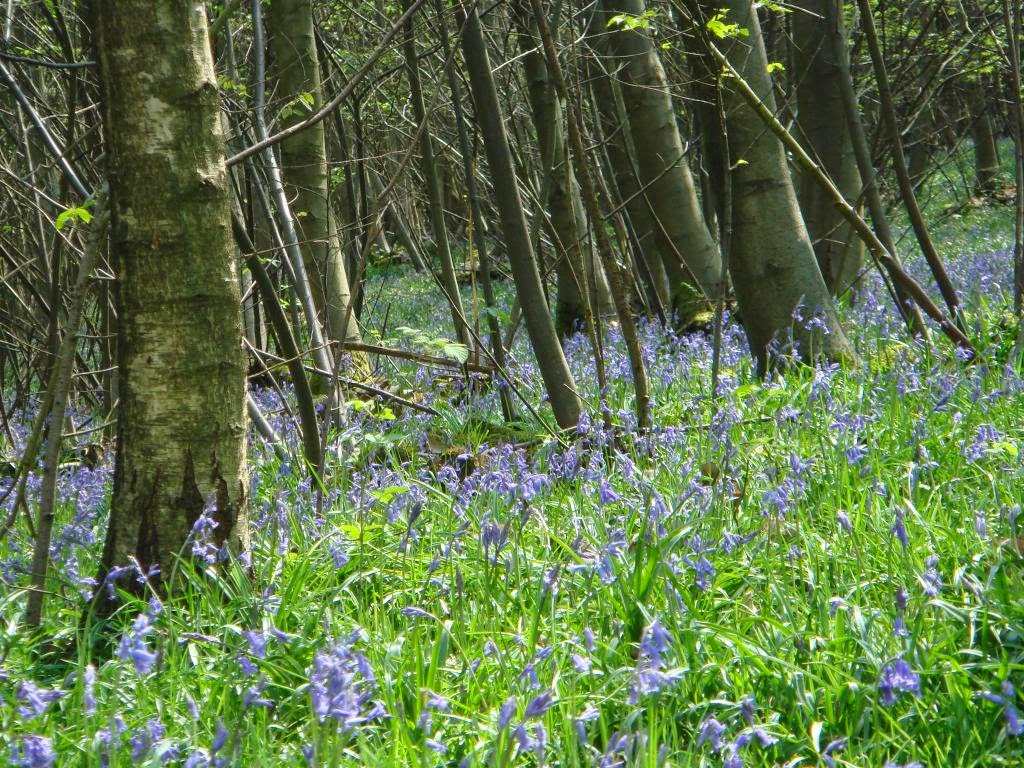 The pictures are of Kentish bluebells - the best kind, of course. I found the poem in The Bluebells and Other Verse, a collection published in 1961; to my surprise (and puzzlement), I found that this book also contains poems by Masefield about Edward the Confessor and, of all things, the medieval legend surrounding the murder of St Ethelbert of Hereford and Ælfthryth of Crowland. Perhaps I shouldn't be so surprised: Masefield was interested in a variety of medieval topics, from Arthurian legend (this is my favourite of his Arthurian poems) to the work of Chaucer, to whom he attributed his 'conversion' to poetry as a teenager; he later wrote "Chaucer was the poet, and the Parliament of Fowls the poem of my conversion. I read the Parliament all through one Sunday afternoon, with the feeling that I had been kept out of my inheritance and had suddenly entered upon it, and had found it a new world of wonder and delight. I had never realized, until then, what poetry could be." And as for the Anglo-Saxons, well, Masefield's 'Sea Fever' is entirely in the spirit of the Old English 'Seafarer' (and even shares one of its kennings: hwælweg, 'whale's way').

But to return to Ethelbert and Ælfthryth: the story centres on King Offa's desire to gain the relics of St Guthlac from Crowland, and given the usual interests of this blog, I can't resist posting a few of Masefield's lines about Guthlac (not, let me say, particularly accurate as regards the saint!):

...the great King's kin, Guthlac, of old,
Roved over seas for women, wine and gold,
Grew great and rich, and as his power failed,
Altered his ways, repented and bewailed;
Gave all he had to build what still abide,
The monkish cells at Croyland where he died;
Where his great bones, under the altar, heal
The sick and sore who call him as they kneel.
All-healing, is Saint Guthlac lying dead.
But Croyland was a fief of Ethelred,
Not in the Great King's realm; and the Great King
Counted those bones a spirit-saving thing.
He was of Guthlac's stock, his kinship claimed
Possession of such dust so greatly famed;
Total possession, for he planned to raise
Over that dust, a church that should amaze,
Stone-wrought and carven, painted, bright with gold,
Unparalleled where man inhabits mould,
Above which sweet-chimed bells should call and tell
Angels and men to join to conquer hell . . .
This, in his capital, unbuilt, but planned
To crown his life and glorify his land,
To bring from far and near the countless host
Who seek St Guthlac's help for flesh or ghost,
And make his capital, St Guthlac's Home,
The greatest Christian seat in Christendom.

But Ethelred, the Eastern King denied.
St Guthlac dead should stay where he had died.
No King in Christendom would lightly yield
So great a glory, so supreme a shield.

Q. Ethelred owned no thing of greater worth:
What King in Christendom held holier earth?

A. It seemed the keystone and the cornerstone
Of all the structure Offa sought to own.
Offa throughout his life had had the dream
Of making this land One, himself supreme,
With Guthlac, King and Saint, glory and guard.

Read the rest here.
Posted by Clerk of Oxford at 8:27 pm

Thanks for that: I'd never read this lovely bit of Masefield. It makes me think of e. e. cummings' 'This is the Garden': 'Time shall surely reap /And on Death’s blade lie many a flower curled, / In other lands where other songs be sung'.

I'd never read that before - what a lovely poem. Thanks for introducing me to it.