The Ladder to Heaven 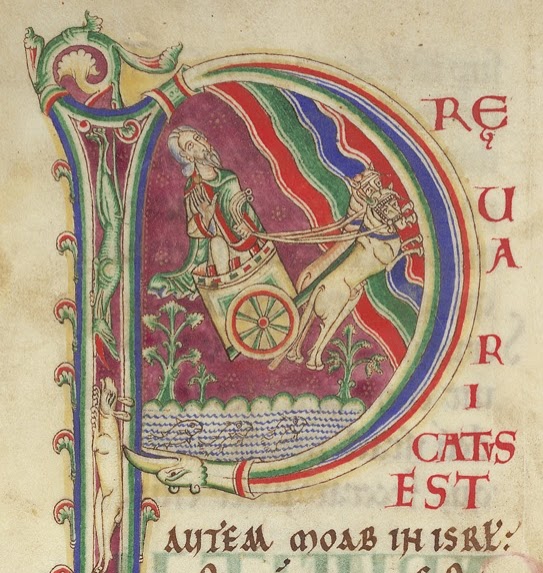 An extract from Part 6 of Ancrene Wisse, the thirteenth-century book of guidance for anchoresses.

The famous part of Ancrene Wisse, the bit which students tend to read (and which I've recently been teaching for the first time), is the section which deals with Love: the love of Christ for the soul, and the love which his sacrifice ought to inspire in the heart of the anchoress. I've posted extracts from this section before, as 'Christ the knight', 'Christ the shield', and 'Set the price of your love...'. It's the most accessible part of a complex text, and is deservedly well-known, superb as prose and characteristic of an important strand of medieval theology. (And the author himself says that this is the most important section; love is 'the lady rule', he says, which other rules of life serve.) But there's more to Ancrene Wisse than this, and at times I find myself drawn to the earlier parts of the text, such as this passage, which deals with penance and the value of suffering in human life. Here's my translation of the above:


Vilitas et asperitas, contempt and adversity, these two, shame and suffering, as St Bernard says, are the two uprights of the ladder which is raised up to heaven; and between those uprights the rungs are fastened, made from all good virtues, by which one climbs to the joy of heaven. Because David had the two uprights of this ladder, though he was a king, he climbed upward and boldly said to our Lord, Vide humilitatem meam et laborem meum et dimitte universa delicta mea. "Look," he said, "and see my humility and my labour, and forgive me all my sins." Observe well these two words which David joins together, labour and humility: labour, in pain and in grief, in suffering and in sorrow; humility, in the face of the injury of shame that a man endures who is considered to be worthless. "Behold both of these in me," said David, God’s darling; "I have the two uprights of the ladder." Dimitte universa delicta mea. "Put behind me," he said, "and cast away all my offences from me, so that lightened from their weight I may lightly rise up to heaven by this ladder."

Those two things, that is, pain and shame joined together, are Elijah’s wheels, which were made of fire, it is said, and carried him up to Paradise, where he still lives. Fire is hot and red. By the heat may be understood every pain which afflicts the flesh; by the redness, shame. This will serve the present purpose. Here they are temporary, just as wheels revolve quickly and do not remain in one place for long. The same thing is also betokened by the sword of the cherubim before the gates of Paradise, which was made of flame, wheeling and turning about. No one ever came in to Paradise except through this flaming sword which was hot and red, and through Elijah’s fiery wheels, that is, through suffering and shame, which turn again in time and soon pass away.

And was not God’s cross ruddied and reddened by his precious blood, in order to show that mortification, suffering and sorrow should be coloured with shame? Is it not written about him, Factus est obediens patri usque ad mortem, mortem autem crucis, that is, "he was obedient to his father not only to death, but even to death on a cross"? When he said "death" first, it is to be understood as suffering; when afterwards he said "death on a cross", that betokens ignominy; for such was God’s death on the dear cross, painful and shameful above all others.

Whoever dies in God and on God’s cross, these two he must endure, shame and suffering. I call it shame always to be considered worthless here and to beg like a vagabond, if necessary, for your means of living, and to be other people’s bedesman, as you are, dear sisters, and to often endure arrogance at times from people who might be your servants. This is the blessed shame I am talking about. Suffering will never fail you. In these two things in which the whole of penitence consists, rejoice and be glad, because instead of these two a twofold joy is prepared for you: instead of shame, honour; instead of suffering, pleasure and rest without end. Isaiah: In terra inquit sua duplicia possidebunt. "They shall," says Isaiah, "have twofold joy in their own country instead of the twofold pain which they endure here" – in their own country, says Isaiah, because just as wicked men do not have a share in heaven, so good men do not have a share in earth. Super epistolam Jacobi: Mali nichil habent in celo; boni vero nichil in terra. In their own country they shall have joy, two kinds of reward instead of two kinds of grief, as if he said, it is no wonder to them that they suffer both shame and sorrow here, as in a strange land and a strange country among unfamiliar people, for so does many a noble man who is a stranger in a strange place. One must labour abroad; at home one can rest. And is he not a foolish knight who seeks rest in the fight and ease in the field of battle? Milicia est vita hominis super terram. "All this life is a battle", as Job bears witness; but after the battle here, if we fight well, honour and rest await us at home in our own country, that is, the kingdom of heaven. 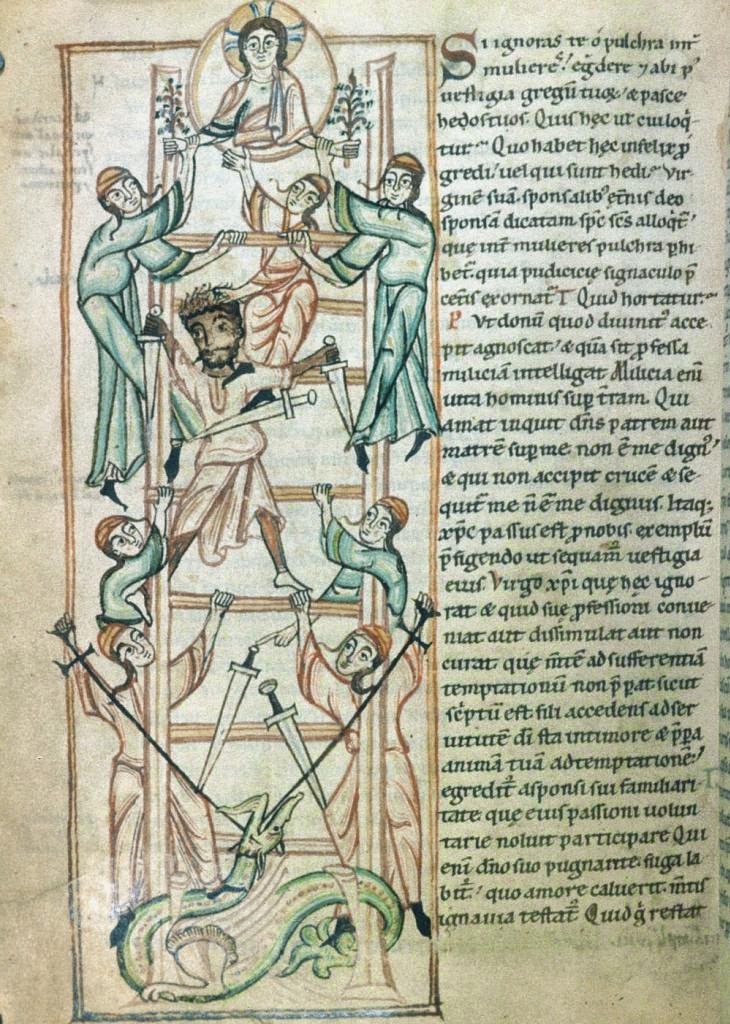 The author urges his audience of anchorites to accept pain and humiliation in the eyes of the world as the surest routes to comfort in heaven; whatever you may think of what he's saying, there's no denying he says it beautifully. The difficulty with translating Ancrene Wisse is that it's almost impossible to preserve the wordplay, on which much of the thought-progression turns and builds. This is also part of what makes the text so appealing - something I've been contemplating over the past few weeks, as I try and work out how to convey this to my students. You can take just about any passage from Ancrene Wisse and have fun puzzling out the mechanics of its complex, fluid - on the surface, almost casual - mode of composition. This passage is structured around pairs of words, which appear as synonymous doublets, as complements, or as oppositions: scheome and pine, eadmodnesse and swinc, sar and sorhe, menske and reste. Everything comes in twos, like the twin uprights of the ladder to heaven, as if rung by rung the ladder is being built before our eyes. St Bernard's image of the ladder is only sustained for a few sentences, quickly exchanged for another means of reaching heaven - Elijah's chariot of fire - but it's established a pattern of doubles which structures the rest of the passage: the twin wheels of Elijah's chariot, leading into the more abstract twins of twofold suffering on earth, countered with twofold bliss in heaven.

A simple instance of the text's characteristic wordplay appears in the author's paraphrase of the words of David (from Psalm 25): "Leaf," quoth he, "bihinde me ant warp awei from me alle mine gultes thet ich, ilihtet of hare hevinesse, lihtliche stihe up to heovene." "Leave," he said, "behind me and cast away from me all my sins so that I, lightened from their heaviness, may lightly rise up to heaven." This plays not only on the words lightened and lightly (which, like the modern equivalent, means both 'not heavily' and 'easily') but also on heaviness, which means both 'weight' and 'sorrow', and points forward to its sound-alike opposite, heaven. (This passage reminds me of Eadmer recalling in his Life of St Anselm that "I can never forget how [Anselm] replied to me once when I asked him to bring it to pass that, as he had had me for a companion in his labours here below, so I might share in his reward in Heaven. He said certainly he would willingly and gladly do this - only let me take care not to make myself too heavy for him. As to this, however, if the just Judge should put away his pity in assessing the weight of my sins, my soul would certainly not rise but go headlong into the bottomless pit.")

Another lovely bit of wordplay comes in the passage about the wheels of fire which bore Elijah up to heaven (in 2 Kings) and the sword of the angel before the gates of Eden, hweolinde ant turninde abuten, 'wheeling and turning about'. Bodily pain and humiliation are like these fires, hot and red; but they are hweolinde, wheeling round and passing in time, like hweoles because they only last a short hwile. 'Wheeling' doesn't convey 'temporary' as strongly today as it did for our author, for whom hweole and hwile were nearly homophones, and who had probably been brought up on the image of Fortune's wheel - the ultimate symbol of the passing nature of earthly things - from his earliest schooldays. Anything which is hweolinde is by definition both short-lived (and thus, reassuringly, will not have to be endured for long) and earthly, not heavenly, for it's only on earth that things pass away; but there's a kind of paradox in the fact that it's the wheels of this very same temporary, earthly suffering which carries you to heaven, where joy is eternal.

Like the pairs of words which form the uprights of the ladder - two ideas which complement each other and so allow something to be built between them - paradox is another form of structural 'twinning', whereby two opposites come together to support a third idea, which is the product of both but identical with neither. Such a paradox is the eadi scheome, 'blessed shame', by which humiliation is turned into honour. And I'm especially fond of what happens to the language in the last few sentences quoted here: on earth, the author says, we suffer as in uncuth lond, ant in uncuth eard, bituhhen untheode... for swa deth moni gentil mon the is uncuth in uncuththe; 'as in a strange land and in a strange country, among an unknown people... for so does many a noble man who is a stranger in a strange place'. It's not really possible to convey in translation the power of all those negatives: four times uncuth ('unknown') and once untheode. The echo is of the Biblical idea of 'a stranger in a strange land', but that phrase is too familiar to render the depth of the strangeness here. The alienation is produced by some peculiar tricks of language: untheode (a word only found in this text, according to the MED) is a negation formed from the word theode, 'a people', and eard means 'country' but really 'native country, homeland', so an untheode and an uncuth eard are troubling things indeed. On earth we are in 'not-our-homeland' surrounded by 'not-our-people' - very far from home. And so how is it surprising if life on earth is difficult? Me mot ute swinken: ed hame me schal resten. 'One must labour abroad; at home one can rest.' 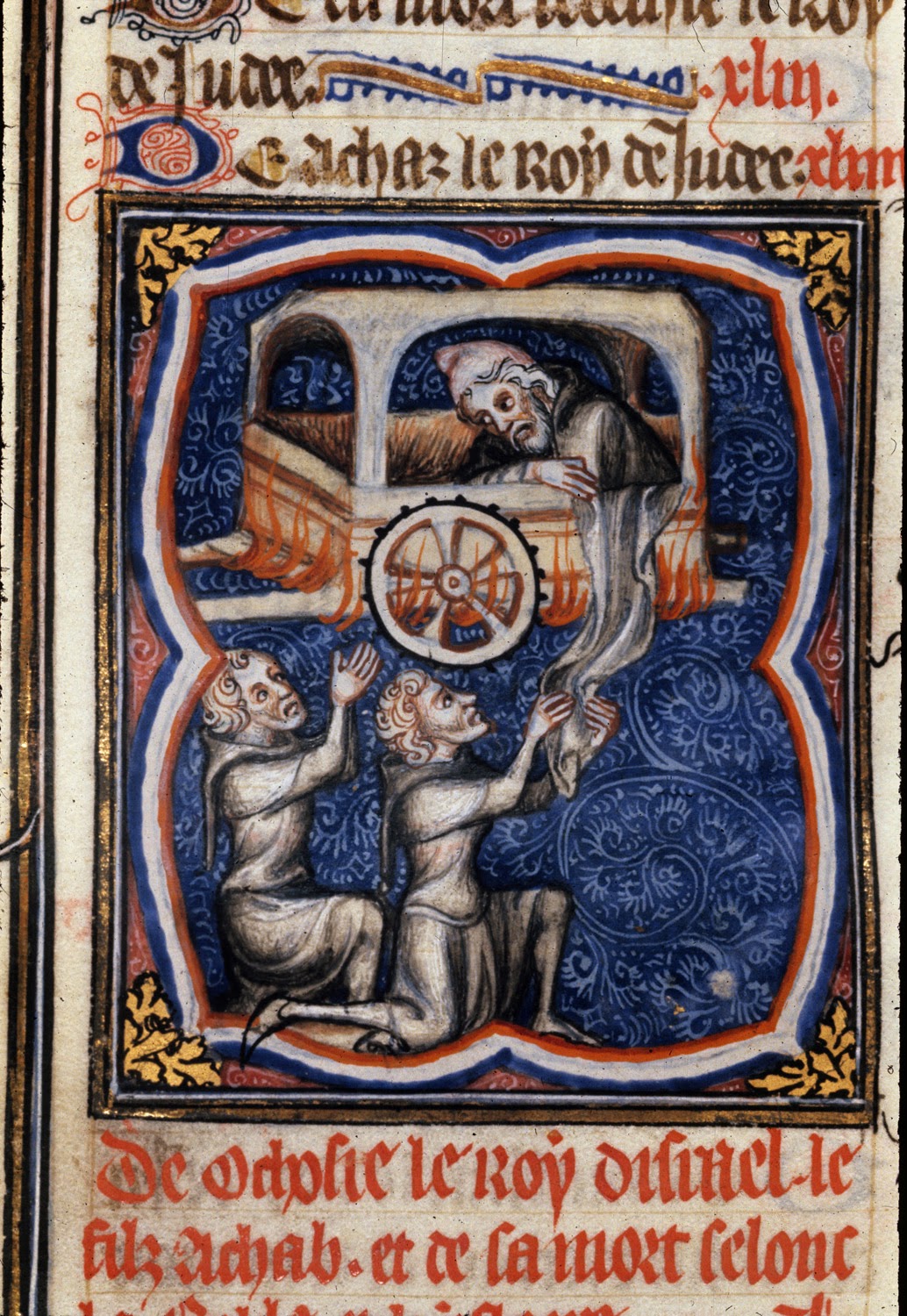