Hostis Herodes impie: 'By light their way to Light they trod' 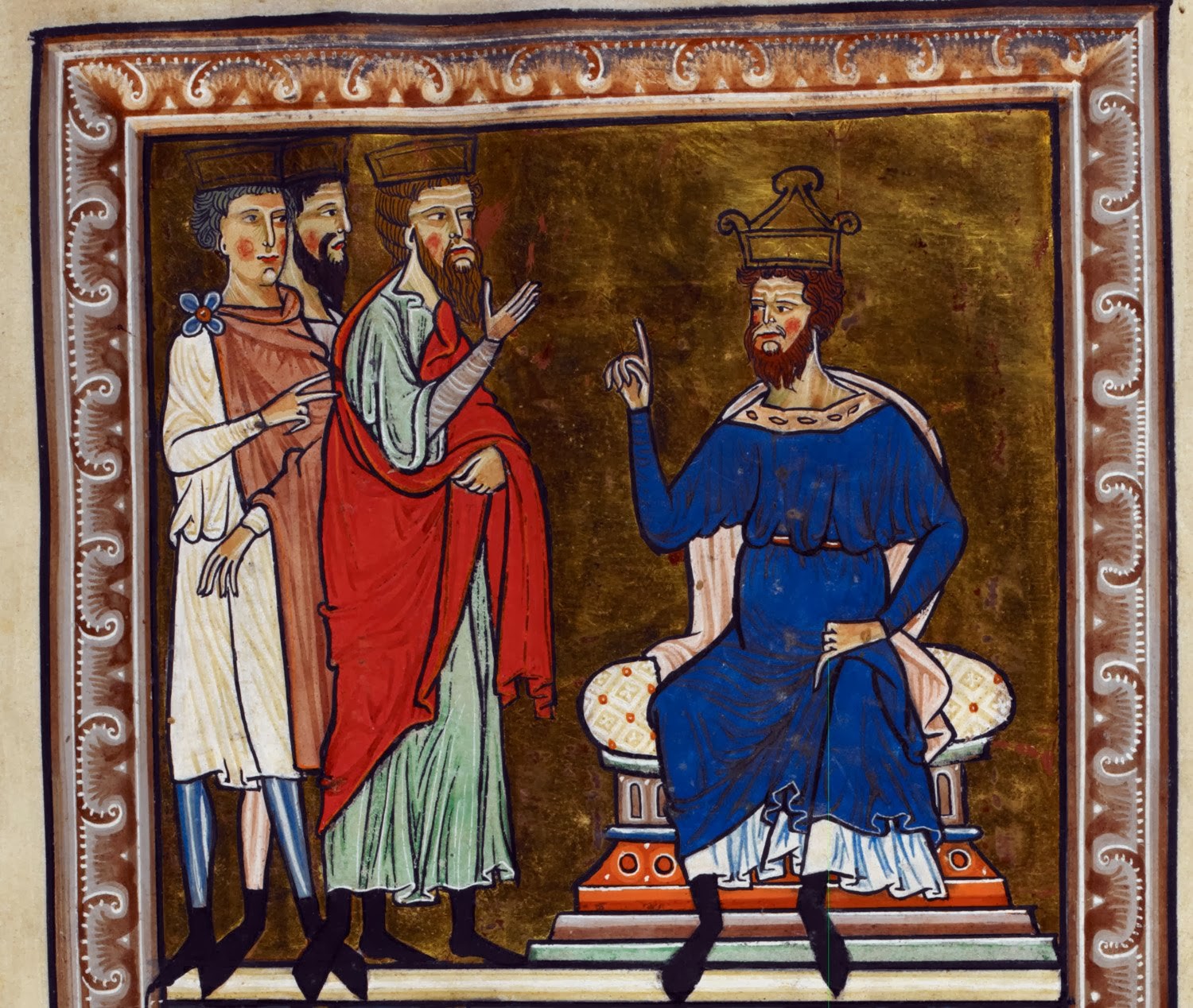 This is a translation of the fifth-century Latin Epiphany hymn 'Hostis Herodes impie' by William Herebert (c.1270-1333). Herebert, a Franciscan friar, lectured in Theology at Oxford between 1317-19, and was a prolific translator of Latin hymns into English verse, often for use in sermons; you can see this hymn written in his own hand here.

The Latin text of the hymn can be found here. Here's a slightly easier version of Herebert's poem:

Herod, thou wicked foe, whereof is thy dreading?
And why art thou so sore aghast at Christ's coming?
He takes not earthly goods away who makes us heavenly kings.

The kings took their way and followed the star,
And true light by star-light they sought from afar,
And showed well that he is God in gold and stor and myrrh.

Christ, called 'heavenly lamb', came so to Saint John,
And by him was washed, who sin had none,
To hallow baptismal water for us whom sin had fordone [ruined].

A new power he showed when he was at a feast:
He had filled with clear water six vats, at the least,
But the water turned into wine through Christ's own behest.

Glory, Lord, be with thee, who showest thyself today,
With the Father and the Holy Ghost, without an ending-day. 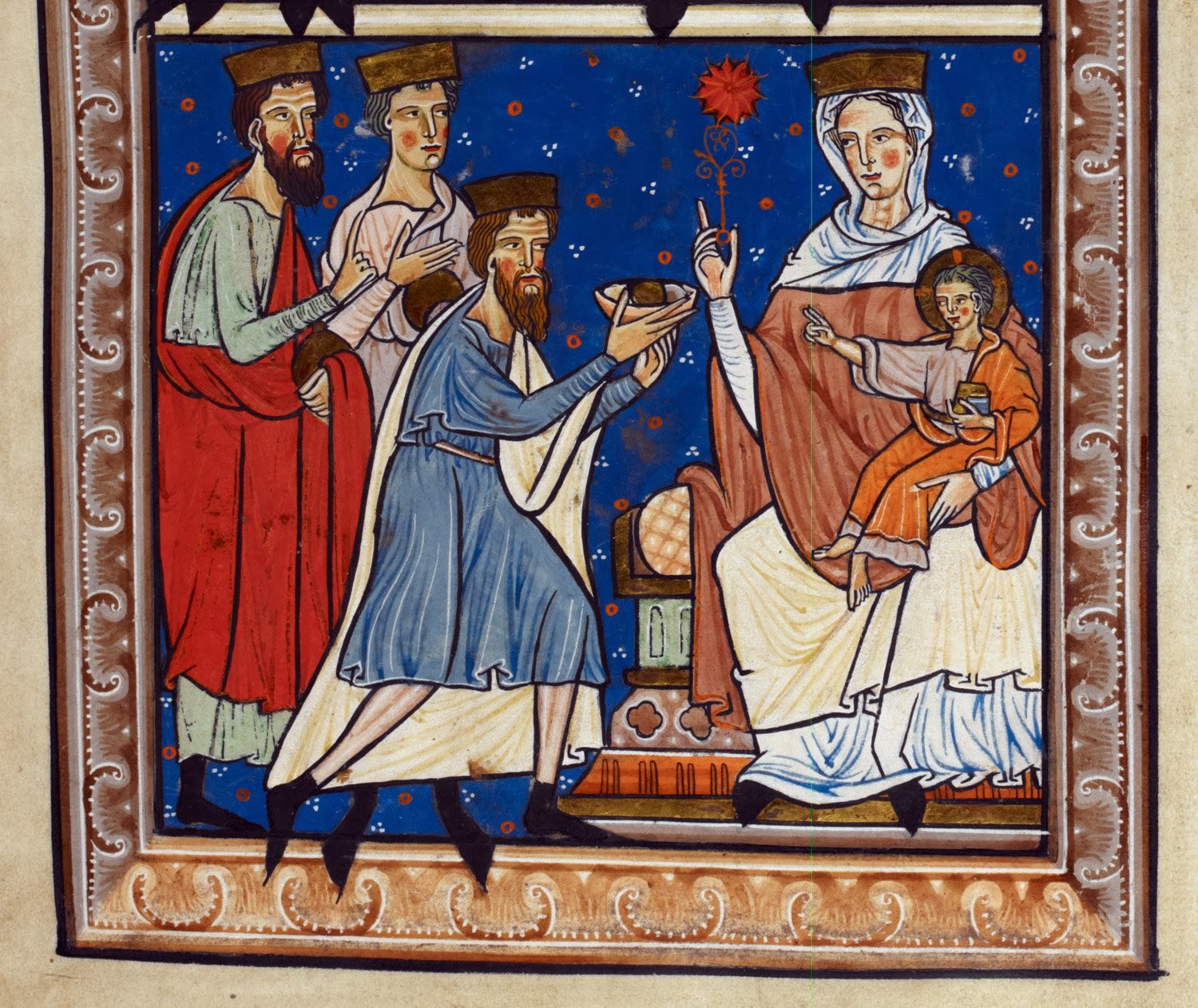 For the purposes of comparison, this is J. M. Neale's translation of the same hymn:

How vain the cruel Herod’s fear,
When told that Christ the King is near!
He takes not earthly realms away,
Who gives the realms that ne’er decay.

The Eastern sages saw from far
And followed on His guiding star;
By light their way to Light they trod,
And by their gifts confessed their God.

Within the Jordan’s sacred flood
The heavenly Lamb in meekness stood,
That He to whom no sin was known,
Might cleanse His people from their own.

And oh, what miracle divine,
When water reddened into wine!
He spake the word, and forth it flowed
In streams that nature ne’er bestowed.

All glory, Jesu, be to Thee
For this Thy glad Epiphany:
Whom with the Father we adore
And Holy Ghost forevermore.

Herebert's first verse is closer to the Latin than Neale's, at least in preserving the question format:

This is one of those moments where a medieval liturgical text exhibits a startlingly directness and dramatic force; the tone of the question is triumphant, almost mocking, as if to say 'what are you so afraid of, Herod? This king is far too mighty to care what happens to your meagre earthly power...'

Herebert adds to the second verse the names of the different gifts, gold and myrrh and 'stor', an Old English word for incense (the word frankincense did not appear in English until the fifteenth century). You can see that for Herebert, who was originally from the Hereford area, 'star' and 'far' (which he spells 'verre') both rhyme with 'myrrh'.

I posted a later medieval translation of this hymn, in a very different style, here.  It begins:

Thou cruel Herod, thou mortal enemy,
Why art thou afraid of Christ? why dost thou dread
That he will put thee from thy royalty?
The heavenly king for earthly thing no need
May have; he giveth heavenly mede;
He careth not for thy mortal empire;
Why trouble thee against this lord to conspire?

The kings three out of the orient
In their journey to guide and to convey
A star appeared, right in the firmament;
None so bright a path at any time saw they!
So light by light devoutly seek they,
And made acknowledgement in their offering
To mortal man, priest and heavenly king.
Posted by Clerk of Oxford at 12:00 pm

Thank you for posting the Hostis Herodes impie. I'm reading " Religious Lyrics of The Fourteent Cent." and sometimes can't glean a word or two.

I sympathise - these lyrics can be tricky! Glad you found this helpful.

As a musician looking for an epiphany text, I tried to write another version using yours - which I thought had some fabulous lines I could never improve on:
Herod, cruel enemy, why your fear?
Why so afraid as Christ appears?
Where is the rob when earthly things
Pale, as he makes us heavenly kings?

The eastern kings marvelled at a star they saw
So starlight led to true light's door
Where God the King was honoured thus
By incense, oil and golden gifts.

Jesus, we give you glory for this night
Revealing truth and giving sight;
To God the Father, Spirit, praise
Be yours throughout eternal days"

The struggling lines are easily detected and if I set this to music, a 10 syllable stanza for the first line will be an interesting challenge. It was a great exercise though. Thanks!