Which knew they by astronomy 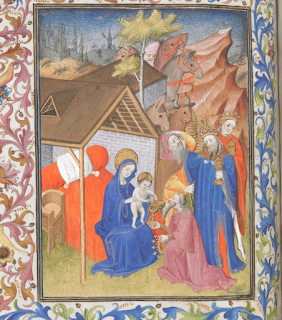 The Adoration of the Magi (BL Egerton 1070, f.34v, 15th century)
Come, love we God, of mightes most,
The Father, Son, the Holy Ghost,
Regnante jam in aethera;
The which made man, both more and less,
And create him to his likeness,
O quanta, O quanta sunt haec opera.

Three Kinges came from the east country,
Which knew they by astronomy,
Et Balam vaticinia,
They offered him gold, myrrh and sence;
He took them with great diligence:
Quam digna, quam digna est infantia!

They turned again full merrily,
Each came unto his own country:
O Dei mirabilia,
They had heaven's bliss at their ending,
The which God grant us old and younge.
Deo Patri, Deo Patri sit gloria.

This lovely carol for the Epiphany season comes from a manuscript of 1611 which belonged to the Shann family, who lived in Methley, Yorkshire. (The manuscript is now BL Additional MS. 38599.) This poem is headed "A Christmas Carroll maid by Sir Richard Shanne, priest"; the manuscript was mostly written by a Richard Shanne (1561-1627), but the author of this carol might perhaps have been an earlier ancestor of the same name. A paraphrase may help:

1. Come, let us love God, the greatest in power, the Father, Son, and Holy Ghost, now reigning in the heavens, who made all mankind, great and small, and created man in his likeness; how great are these works!

2. The shepherds came to present their offering to that lovely child with utmost reverence. They gave their gifts to that child and were well received; how welcome are these gifts!

3. Three kings came from the east, finding the way by astronomy and by the prophecy of Balaam. They offered him gold, myrrh and frankincense, and he took them, as was his right; how worthy was that infancy!

4. They returned again full merrily and each came to his own country; O wonderful works of God! At their death they entered into the joy of heaven; may God grant that to us, both old and young. Glory be to God the Father!
Posted by Clerk of Oxford at 1:41 pm