19 January is the feast of St Wulfstan of Worcester, vegetarian, anti-slavery campaigner, and eleventh-century bishop. Appointed Bishop of Worcester late in the reign of Edward the Confessor, Wulfstan was one of the few high-ranking English churchmen to keep his position after the Norman Conquest. When he died in 1095 he was the only English bishop left in England, and he was highly respected by Normans and English alike for his personal holiness and, in a way, as a relic of the Saxon church, which was so quickly taken over by Norman customs after the Conquest. For the English historian Eadmer, describing why St Anselm, as Archbishop of Canterbury, consulted Wulfstan about pre-Conquest English customs, Wulfstan was "the one sole survivor of the old Fathers of the English people".

Colman, Wulfstan's own chaplain and chancellor, wrote a life of the saint in English, which sadly does not survive; but luckily it was translated into Latin by William of Malmesbury in the 12th century, and so we have a detailed account of his life. The wikipedia article gives all the key facts of his career without giving any of the interesting ones. So here are some of Colman's more memorable stories about him (all quotations are from Michael Swanton's translation of the Latin life in Three Lives of the Last Englishmen):

1. First of all, the story of how he got his name gives a little insight into Anglo-Saxon naming practices. His father was called Æthelstan ('noble stone') and his mother was called Wulfgifu ('gift of the wolf'), so they named their son 'Wulfstan', combining elements from the two names. I suppose 'Æthelgifu' ('noble gift') would have been the other option, but that's a woman's name. Combining bits of other names to make new ones has become popular in recent years, and is often mocked as a ridiculous modern practice, but it was easy for the Anglo-Saxons, because many Germanic names are made of two free-standing elements which can be switched around. Most likely Wulfstan was really named after his very famous uncle, Wulfstan Archbishop of York, who was a prominent homilist, law-maker and advisor to both Kings Æthelred and Cnut - but the combining of names is a nice story.

2. As a child, being educated in the monastery of Peterborough, Wulfstan was taught by a monk named Earnwine, "an expert in writing and painting pictures... He had given the young Wulfstan some books to look after - a sacramentary and a psalter, in which he had illuminated the capital letters with gold. The boy was captivated by the rich decorations, and while his eager eyes explored its beauty, his mind was taking in the meaning of the words. But the teacher, looking to worldly advantage and hoping for larger profit, presented the sacramentary to Cnut, who was king at that time, and the psalter to Emma, the queen. The child was heartbroken at the loss."  This touching story has a happy ending, though.  Wulfstan had a dream in which an angel promised the books would be returned to him, and much later they were: Cnut had sent the books to Cologne as a diplomatic gift to the Holy Roman Emperor, and in the reign of Edward the Confessor they happened to be brought back to England, and were given to Wulfstan as a gift by someone who did not know of his dream. Fetching lost books is a pretty useful saintly attribute! 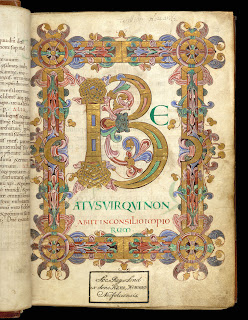 It would have been a book like this one, the Eadui Psalter

3. Another story tells how as a teenager, back home with his parents, a local girl fell in love with Wulfstan. One day a large group of young people had gathered in a field, competing in races and atheletic games, and Wulfstan won all the honours of the game. "The rural crowd shouted his praises, re-echoing on the ears again and again." (Incidentally, this is a nice insight into how Anglo-Saxon teenagers amused themselves in their free time). Wulfstan, of course, remained humble despite all this praise, so the Devil put it into the mind of the girl "to dance in front of him to the accompaniment of a harp, with lewd gestures and shameless movements such as might gratify the eyes of a lover. And he, whom neither words nor touches had weakened [she had previously been in the habit of squeezing his hand to try and seduce him], now panted with desire, completely reduced by her disarming gestures. He immediately came to his senses, however, and bursting into tears, fled away into some rough undergrowth... There sleep crept over him, and a cloud came down from above, a bright and attractive gleam playing on the eyes of those who saw it spreading out to cover a considerable area, amazing the onlookers." They came and asked Wulfstan to explain what it meant, and he said it was a sign of heavenly love, and that from henceforth he would always be free from sexual temptation. His biographer notes that as an old man he often told these stories about his own life to encourage others - he told the story about his childhood to boys, and this story to young men.

4. Later, as a monk at Worcester, he was praying in the church at night when an old peasant came in and scolded him for being there so late, and challenged him to a fight. Wulfstan - knowing, of course, that it was the Devil in disguise - wrestled with the peasant until he vanished in a puff of smoke. "However, lest he should seem to have achieved nothing, the Devil trampled on the foot of the righteous man with the full weight of inquity, simply piercing it through as if with a red-hot branding iron. Godric, a monk in the same convent, who says he has often seen it... testifies that the wound penetrated to the bone. And I [that is, Colman] knew the boor whose appearance the Enemy assumed. He was certainly an appropriate fellow - with savage strength, monstrous wickedness and hideously deformed face."

The rest of Wulfstan's life was not so beset with trials, although he did perform numerous miracles while he was Bishop of Worcester. The leading men of his day sought his counsel, especially Harold Godwineson, who had a particular esteem for him. After the Conquest, King William also developed a great respect for him, as did Malcolm of Scotland and St Margaret. One of his most notable achievements was to put a stop to the slave trade in Bristol, from where slaves used to be taken for sale in Ireland. Colman has many stories of his personal humility and piety, and I'll finish with this one:

Out of humility, Wulfstan dressed in lamb-skin, avoiding ostentatious clothes. "On one occasion he was benignly reproved by Geoffrey, bishop of Coutances, showering the man with the most witty remarks, among which he asked why he wore lamb-skin, when he could and ought to have sable, beaver or wolf. He replied neatly that Geoffrey and such men practiced in worldly wisdom ought to make use of the pelts of crafty beasts, while he, who partook in no subterfuge, was content with lamb-skin. To which Geoffrey rejoined that Wulfstan might at least dress in catskin. "Believe me," replied Wulfstan, "We praise the Lamb of God more often than the Cat of God!" At these words Geoffrey burst out laughing, quite delighted".

And one final story about dress and appearance. Wulfstan strongly disapproved of men with long hair. Apparently "if any of these yielded [Wulfstan] his head, he would cut away the unrestrained locks with his own hand. For this purpose he had a little knife, with which he used to scrape muck from his nails or dirt off of books... If anyone thought to refuse, he would openly accuse him of softness, openly warn him of misfortune. It would come to pass that those who were ashamed to be what they were born and imitated the flowing tresses of women, would prove no better than women in the defence of their homeland against foreigners. As much became evident with the coming of the Normans that same year. Who can deny it?"

So that's why the English lost at Hastings! Elsewhere William of Malmesbury says exactly the opposite about the English defeat at Hastings - it was the short hair that did it. Interesting theories...


For more about Wulfstan, see this post, and for a visit to Worcester Cathedral, see this one.
Posted by Clerk of Oxford at 12:31 am

Look in the Mirror said...

Great and very interesting post. I'm researching Wulfstan's life for a book, and these anecdotes will prove useful. Tell me, however, having no access to Colman's biography and having never read it, does Colman ever relate whether St. Wulfstan ever had any faults? For instance, did he have a quick temper or was he occasionally given to overeating or was he sometimes less than patient, etc.? In other words, does Colman allow that he, too, was human, or does he make him into the type of saint who never once broke wind or the such?

Thanks, Clerk. Keep up the good work.

Thanks for the comment. I can't honestly remember whether Wulfstan is said to have any specific faults, but it is made clear in the biography just how difficult it was for him to struggle against temptation as a young man, especially in the story of the woman who tried to seduce him. On that occasion he's pretty much only saved from sin by divine intervention. It's by no means easy for him to be virtuous, and he is humble about admitting this in telling the story for the encouragement of other young men. So he is certainly allowed to be human to that extent!