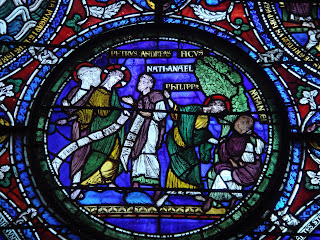 I promised medieval glass from Canterbury, and here's a little bit - inspired by the fact that the New Testament reading at Evensong just now was one of my favourite NT stories (John 1.43-51):

The day following Jesus would go forth into Galilee, and findeth Philip, and saith unto him, "Follow me."

Now Philip was of Bethsaida, the city of Andrew and Peter. Philip findeth Nathanael, and saith unto him, "We have found him, of whom Moses in the law, and the prophets, did write, Jesus of Nazareth, the son of Joseph."

And Nathanael said unto him, "Can there any good thing come out of Nazareth?"

Philip saith unto him, "Come and see."

Jesus saw Nathanael coming to him, and saith of him, "Behold an Israelite indeed, in whom is no guile!"

Nathanael saith unto him, "Whence knowest thou me?"

Jesus answered and said unto him, "Before that Philip called thee, when thou wast under the fig tree, I saw thee."

Jesus answered and said unto him, "Because I said unto thee, I saw thee under the fig tree, believest thou? thou shalt see greater things than these." And he saith unto him, "Verily, verily, I say unto you, Hereafter ye shall see heaven open, and the angels of God ascending and descending upon the Son of man."


That's such a fantastic piece of narrative; I love how natural the dialogue is (not so much in the King James Version, of course, but I used that because how can one forgo the line, "Can any good thing come out of Nazareth?"): Philip's excitement, and Nathanael's scoffing, and Philip's simple "Come and see"; and then (I hope I'm not alone in reading it this way), Jesus almost teasing, bantering with the doubting Nathanael - dazzling him by what he knows ('I saw you under the fig tree'; the way Sherlock Holmes might dazzle someone by guessing what they do for a living, so precisely that it seems psychic!) and then, when Nathanael is amazed, mocking him just a bit, "Does such a little thing impress you? You'll see greater things than that."

I imagine it as the tone C. S. Lewis conjured up for Aslan, sometimes, when he is welcoming someone who has resisted him and - with great love and fondness - teasing them, so that they begin to learn to know how well he knows them. A gentler version of this, from Prince Caspian:

"And now!" said Aslan in a much louder voice with just a hint of roar in it, while his tail lashed his flanks. "And now, where is this little Dwarf, this famous swordsman and archer, who doesn't believe in lions? Come here, son of Earth, come HERE!" - and the last word was no longer the hint of a roar but almost the real thing.

"Wraiths and wreckage!" gasped Trumpkin in the ghost of a voice. The children, who knew Aslan well enough to see that he liked the Dwarf very much, were not disturbed; but it was quite another thing for Trumpkin, who had never seen a lion before, let alone this Lion. He did the only sensible thing he could have done; that is, instead of bolting, he tottered towards Aslan.

Aslan pounced. Have you ever seen a very young kitten being carried in the mother cat's mouth? It was like that. The Dwarf, hunched up in a little, miserable ball, hung from Aslan's mouth. The Lion gave him one shake and all his armour rattled like a tinker's pack and then - heypresto - the Dwarf flew up in the air. He was as safe as if he had been in bed, though he did not feel so. As he came down the huge velvety paws caught him as gently as a mother's arms and set him (right way up, too) on the ground.

"Son of Earth, shall we be friends?" asked Aslan.


In the spirit of affectionate teasing, I do like how in the Canterbury scene it looks like Nathanael is sitting under a giant lettuce leaf. You have to cut the artist some slack; he'd probably never seen a fig-tree...

I started to write a (modern-day) novel inspired by this scene, but it went in a different direction than I was expecting. I'll try again some day. There's something very interesting to be got out of it, something about identity and recognition, about how we know goodness and how God knows us; but I haven't got it yet...
Posted by Clerk of Oxford at 6:55 pm