Gilt on Graves, Light, and Some Lewis 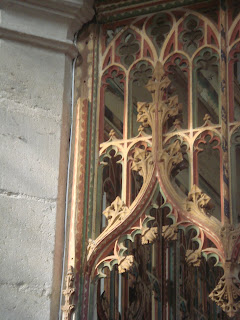 I'm in the mood for some pictures. These are from the church of Dennington, Suffolk, about which I don't have very much to say; you can read about it (and see better pictures) here. I think of this as 'the church where the sun came out', because I went in on a grey March day, and so found a dark, grey church; but half-way through my visit the sun suddenly came pouring through the windows, right on to this glorious golden tomb: 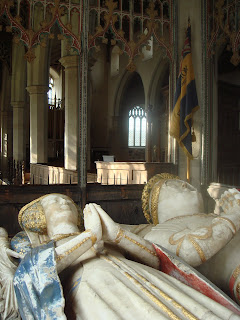 So these are mostly pictures of sunlight, in various guises. 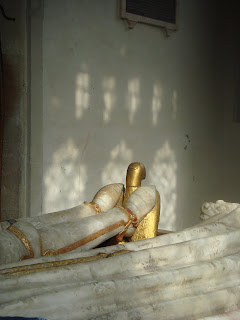 This is the tomb of William Bardolph (d.1441) and his wife. It's made of alabaster, a medium in which English artists of the Middle Ages excelled (there are some wonderful examples here in Oxford at the Ashmolean, and see pictures here, here and here). 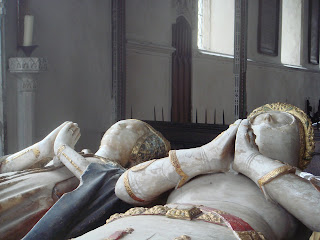 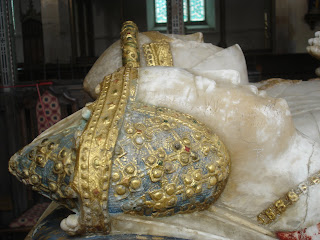 "Side by side, their faces blurred..." 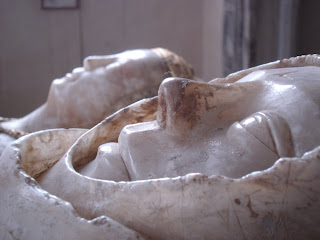 Their heads are pillowed on cushions borne by angels - 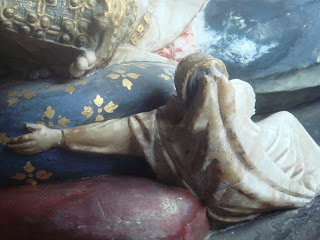 - with such delicate hands! 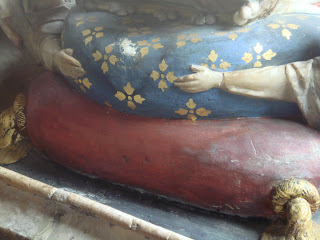 Look at the tassel on the cushion - and the buckles on his shoes: 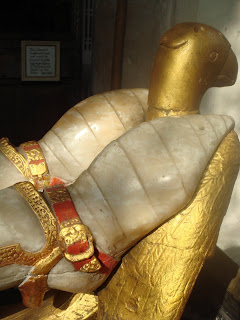 Outside the chantry chapel, the sunlight comes through modern windows: 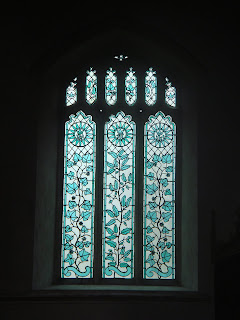 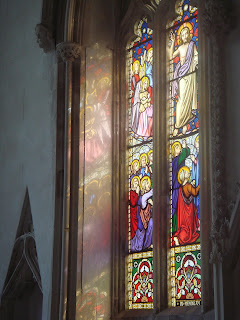 As will have become evident if you have ever seen my church posts before, I love shots which show light coming through stained-glass windows. I can never get enough of pictures like this: 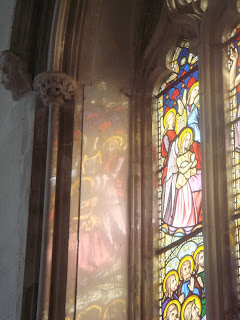 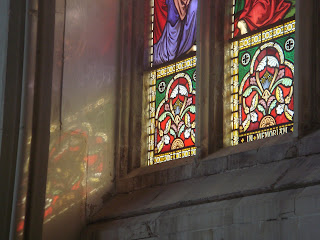 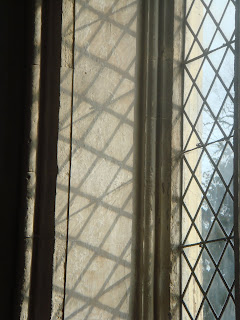 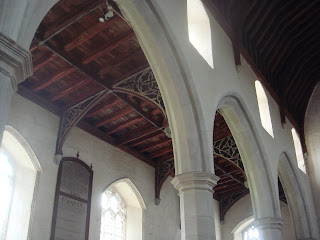 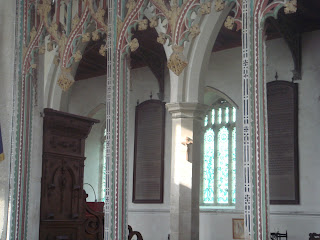 One last thing: Dennington has the only carved English depiction of a sciapod, perhaps better known (to me at least) as a dufflepud: 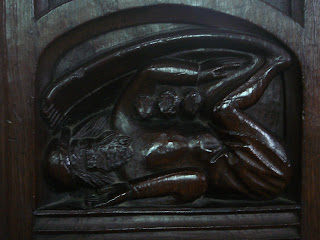 'They were certainly very like mushrooms, but far too big - the stalks about three feet high and the umbrellas about the same length from edge to edge. When [Lucy] looked carefully she noticed too that the stalks joined the umbrellas not in the middle but at one side which gave an unbalanced look to them. And there was something - a sort of little bundle - lying on the grass at the foot of each stalk. In fact the longer she gazed at them the less like mushrooms they appeared. The umbrella part was not really round as she had thought at first. It was longer than it was broad, and it widened at one end. There were a great many of them, fifty or more.

Instantly a most extraordinary thing happened. Each of the "mushrooms" suddenly turned upside-down. The little bundles which had lain at the bottom of the stalks were heads and bodies. The stalks themselves were legs. But not two legs to each body. Each body had a single thick leg right under it (not to one side like the leg of a one-legged man) and at the end of it, a single enormous foot -a broadtoed foot with the toes curling up a little so that it looked rather like a small canoe. She saw in a moment why they had looked like mushrooms. They had been lying flat on their backs each with its single leg straight up in the air and its enormous foot spread out above it. She learned afterwards that this was their ordinary way of resting; for the foot kept off both rain and sun and for a Monopod to lie under its own foot is almost as good as being in a tent...

The Duffers were also very pleased with their new name of Monopods, which seemed to them a magnificent name though they never got it right. "That's what we are," they bellowed, "Moneypuds, Pomonods, Poddymons. Just what it was on the tips of our tongues to call ourselves." But they soon got it mixed up with their old name of Duffers and finally settled down to calling themselves the Dufflepuds; and that is what they will probably be called for centuries.'

The Voyage of the Dawn Treader, ch.11
Posted by Clerk of Oxford at 5:50 pm