This seems appropriate for a day on which everyone is talking about the end of the world.

A little church in a little village in Wenhaston, Suffolk, owns an extraordinary treasure of medieval art: known as the Wenhaston Doom, it is a 16th-century depiction of the Day of Judgement painted on wooden panels. It was originally fixed between the chancel and the nave, but at the Reformation it was whitewashed over and forgotten. Its existence was only revealed by chance in 1892, when the church was being renovated: the panelling was taken down and left in the churchyard overnight, and rain happened to wash away the whitewash, and reveal the scene underneath.

This is the church: 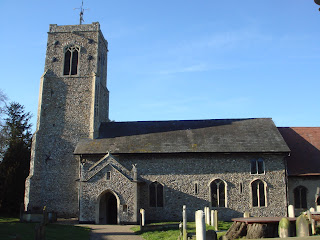 And this is what you see when you open the door: 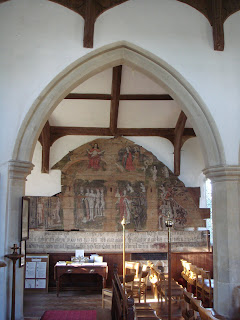 I believe I gasped. It's huge, and so brightly-coloured! You can see, from a distance, how the unpainted sections mark where the Rood was originally fixed, with one figure on either side (Mary and John). 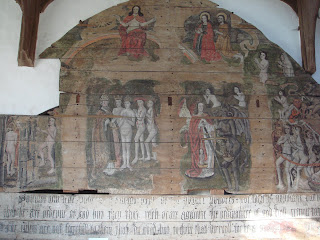 Christ, in the top left, is seated on a rainbow: 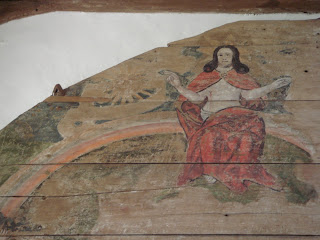 Mary and John kneel on the other side: 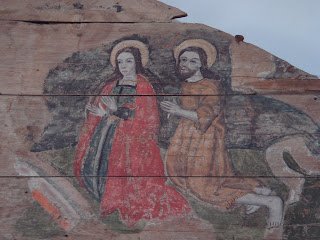 And below, St Peter welcomes the dead into heaven. Note that all the dead are naked, but some have headgear to denote their status in life. 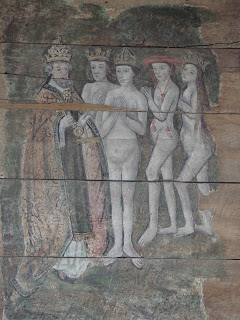 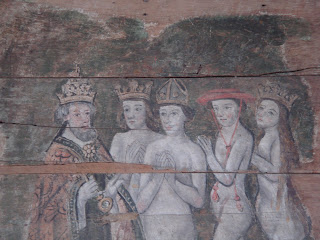 Next to St Peter, an angel opens the gate of heaven - look at that beautiful face! 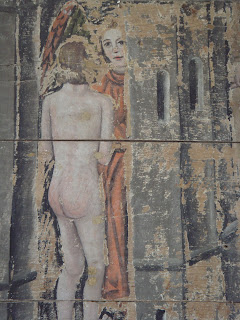 You can see a bit more clearly in this one that heaven is a castle (in my Father's house, there are many mansions...): 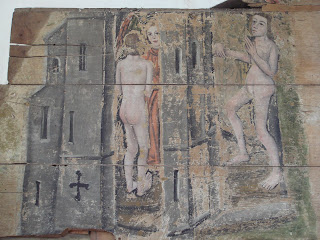 I love the clasp of the hand (presumably of an unseen angel) around the wrist of the man on the right.

Those are the saved; on the other side, we have the damned, being drawn into the Hell-mouth: 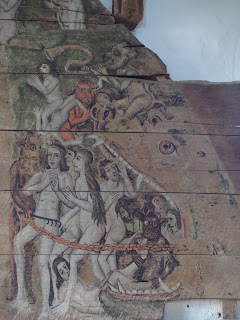 The eyes of the demons are terrible; and note the man at the bottom, gnawing the woman's leg: 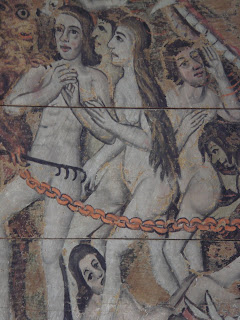 St Michael, impassive, and a gruesome demon weigh souls in the balance: 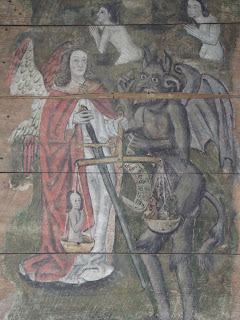 On one side, I think, you have the soul's good deeds (his piety and prayer) and on the other, his wicked little sins. 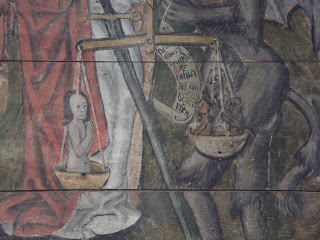 It looks like the good side might just tip the balance.
Posted by Clerk of Oxford at 9:28 pm