The Fruit of this World is Falling: An Anglo-Saxon Sermon for Advent An apocalyptic scene on the Lindisfarne stone
There's some interesting writing about Advent from the Anglo-Saxon period: perhaps this is not surprising, since Advent is an opportunity to reflect not only on the coming of Christ but on the end of the world, and one of the most popular themes in Old English poetry and prose is the ultimate fate of all earthly things. In the later medieval period, the trend in English writing about Christmas is often to focus on the mystery of the Incarnation, and all the poetic richness that can be found in the interaction of the divine and the domestic, the heavenly and the homely worlds; I'm thinking especially of the carols and the mystery plays. But (to speak broadly), it was the cosmic implications of the Incarnation and the Second Coming which really excited the imagination of the Anglo-Saxons.

And so here is an extract from a homily for the Second Sunday of Advent which was written by Ælfric, perhaps the most skilful (and certainly the most prolific) writer of Old English prose. He lived in the second part of the tenth century (c.955-c.1010), when the close of the first millennium meant that thoughts of the end of the world were much on the mind.  This an extract from a longer homily, which you can read online in Old and Modern English here.  The Gospel for the Second Sunday of Advent was (and still is, in some churches) taken from Luke 21:25-33, which talks about the signs of the end of the world. Ælfric begins by discussing these signs, and tells his listeners that although they have seen some of the signs in their own times (wars, earthquakes, famines), others have not happened yet (unusual movements of the stars, the darkening of the sun and moon). But nonetheless, he says, the world will end one day. And then he says:


O, let not any believer who wishes to see God grieve for the world's end! They should grieve for the destruction of the world who have planted the root of their heart in the love of it, who do not seek the life to come, nor even believe in it; but truly, we, who know of all the joys of our heavenly homeland, should with one mind be hastening there. We ought to wish that we may swiftly travel there, and come there by the short way, because this world is afflicted with many sorrows, and made wretched by many evils.

What is this deathly life but a journey? Consider what it would be like to grow weary labouring on with a journey, and yet not to wish for the journey to end. The Lord said, "Behold this fig-tree, and all other trees: when they sprout leaves, then you know that summer draws near. So in the same way, when you see the aforementioned signs, then you may know that the kingdom of God draws near." Truly, by these words it is shown that the fruit of this world is falling. It grows so that it may fall; it sprouts up so that it may destroy with pestilence what had previously sprouted.

This world is like a man grown old. In youth the body is thriving, with a powerful chest, with strong and healthy limbs; but in old age this man's height is bowed down, his neck grows slack, his face is wrinkled, his limbs all made weak. His breast is oppressed with sighs, and between words his breath fails him; though sickness may not afflict him, yet very often health is like a sickness to him. So it is with this world. In the beginning it was thriving as in its youth, growing in bodily health, getting fat on the abundance of plenty, with a long time to live and dwelling in lasting peace. But now it is oppressed by old age, as if by its frequent troubles it is afflicted unto death.

My brothers, do not love this world, which you see cannot last long! The apostle said of this, "Do not love the world, nor anything that lives in it, because whoever loves the world does not have the love of God in him." The kingdom of God is well likened to the summertime: for then the clouds of our sorrow will pass away, and life's days will shine with the brightness of the eternal sun...

The wise man said that the great day of God is near at hand, and incredibly swift. Even if it were still a thousand years until that day comes, it would not be any slower, because the end comes swift and quick, and when it is ended it will be as if it had never existed. And even though it were a long time until that day - which it is not - nonetheless our time will not be long, and at our ending it will be judged whether we shall await the common doom in peace or in suffering. Let us therefore make use of the time which God has given us, and merit eternal life with him who lives and reigns for ever, world without end. Amen. 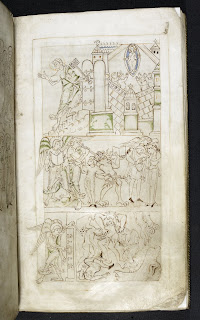 Hello there,
this is me stumbling over your marvellous blog somewhat late in the day and wanting first to say 'Thank you', and secondly to ask if you have come across my argument that the Stowe 944 scene is not a Last Judgement? It's in V. Thompson, Dying and Death in Later Anglo-Saxon England (Woodbridge, 2004), pp.201 ff.

Hello! That's very interesting, and I'll go and read your argument at the first opportunity - I'm intrigued by the idea of a different reading of the scene. And I'm glad you like the blog!