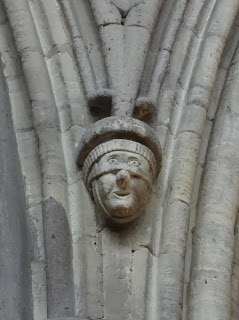 December 23rd is the feast-day of St Thorlak, the patron saint of Iceland, who has some unexpected but interesting connections to medieval England. Born in 1133, Thorlak was bishop of Skálholt from 1178 until his death on December 23, 1193, and you can read about his life at this useful site. What I have to offer today is a brief story which appears to be evidence for the veneration of St Thorlak in England, and which is also comedy of the kind only medieval saints' legends can supply... 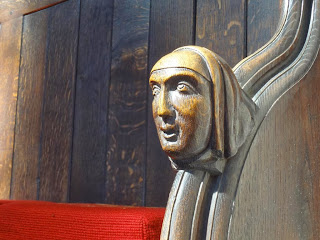 Thorlak had studied in England - specifically, in Lincoln, after a spell in Paris. The account of his life in Þorláks saga (which is online here, if you can read Old Norse) says that in Lincoln he "acquired a great amount of learning, and thereby benefited both himself and others".

This would have been probably around 1160. A few years later his nephew Páll, who succeeded him as bishop, also went to study in Lincoln as a young man (and learned, apparently, so much that he was the most well-educated man of his day, "surpassing all other men in Iceland in courtliness and learning, the making of verse, and in book-lore". An English education was clearly a good one in the twelfth century!) 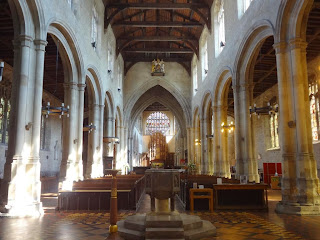 Soon after his death, Thorlak began to be honoured as a saint in Iceland - and apparently in England too. According to Þorláks saga, early in the thirteenth century there was a man named Auðunn living in England in a place the saga calls 'Kynn', usually taken to be King's Lynn, in Norfolk. Auðunn had a statue of St Thorlak made and set up in a church there. One day an English cleric came into the church and saw it, and asked whose likeness it was supposed to be. He was told it was St Thorlak, a bishop from Iceland, at which he burst out laughing. He went into the kitchen and got a bit of sausage, and came back into the church in front of the statue; he held out the sausage to the icon, and said to it mockingly, "Want a bit, suet-man? You're a suet-bishop!" 'Suet-man' (mörlandi) was a derogatory name for Icelanders. Having had his joke, the cleric turned to go; but he could not move from the place where he stood, with his hand clenched immovably around the sausage. People flocked to see the miracle, and asked how it had happened. The cleric confessed his foolishness in front of them all, and repented of it (well, you would!). He begged them to pray for him, and after a time he was freed from his miraculous frozen state. And ever afterwards he learned to treat St Thorlak with respect. 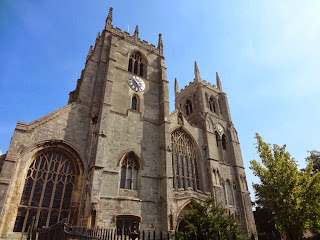 The pictures in this post were taken in St Margaret's church, King's Lynn, last August. It's a lovely town, and between suet-bishops and Margery Kempe it has some remarkable medieval history. For a rather more dignified celebration of St Thorlak than the sausage-story, listen to some of the surviving medieval music for his feast-day...
Posted by Clerk of Oxford at 11:13 pm

I love this story, which was completely new to me, and spread it around. Thanks for sharing and Merry Christmas!

Merry Christmas! I love this story too - so utterly absurd...

Amazing what you can find out from the written word. Top image almost looks like it has a sausage for a nose!