But the veil withdrawn 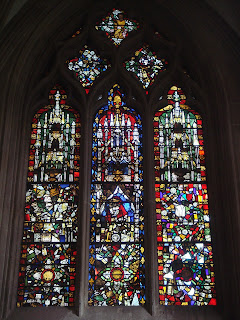 This Advent hymn is not one of the most popular, but I like it; the last verse is absolutely perfect. Its author, Joseph Anstice, was a talented classical scholar, who took a double first at Christ Church, Oxford, in 1831, and was appointed Professor of Classical Literature at King's College, London, at the age of 22 (ouch; those were the days to be an academic!). He won the Newdigate Prize while he was at Oxford, for a poem on Richard the Lionheart, and wrote a number of well-regarded essays on classical subjects; but his career was cut short by ill-health, and he died in 1836, at just 27 years old.

A collection of his hymns was published posthumously (and some of them can be read here), though 'When came in flesh' is the only one that is sung today. It's usually sung to the tune 'Walsall', a dramatic, stately kind of thing attributed to Henry Purcell - beautiful in its way, but to my ears a little out of keeping with these words, which deliberately draw careful distinctions between the extremes of noise and quiet, meekness and power, awe and love.


1. When came in flesh the incarnate Word,
The heedless world slept on,
And only simple shepherds heard
That God had sent his Son.

2. When comes the Saviour at the last,
From east to west shall shine
The awful pomp, and earth aghast
Shall tremble at the sign.

3. Then shall the pure of heart be blest;
As mild he comes to them,
As when upon the virgin's breast
He lay at Bethlehem.

4. As mild to meek-eyed love and faith,
Only more strong to save;
Strengthened by having bowed to death,
By having burst the grave.

5. Lord, who could dare see thee descend
In state, unless he knew
Thou art the sorrowing sinner's friend,
The gracious and the true?

6. Dwell in our hearts, O Saviour blest;
So shall thine advent's dawn
'Twixt us and thee, our bosom-guest,
Be but the veil withdrawn.
Posted by Clerk of Oxford at 11:34 am