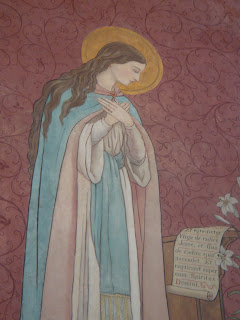 For the Feast of the Immaculate Conception, here's a medieval poem in praise of the Virgin Mary. The opening lines set the poem in autumn or winter, but the poem turns from depicting the transience of earthly life (a familiar theme in medieval poetry, on which see also this poem and this one; and also this and this - I said it was familiar!) to an appeal for salvation which is full of hope. This makes it appropriate for Advent, I think.

The shift from the winter setting, when "the rose and lily wither", to the poem's main subject may seem a little abrupt, but we should probably remember that flower imagery is extremely common in Middle English lyrics to describe both Christ and the Virgin Mary; there's an implicit contrast between the earthly rose and lily, which fade and die, and the heavenly "rose of Sharon, lily of the valley". Mary is the "Lady, flower of alle thing, rosa sine spina", as this carol has it; and in this superb fifteenth-century poem, Christ is the flower which bloomed in Bethlehem, and Mary the branch on which he grew.

I'm going to wait while you go and read that last link, because it's such a very good poem.

Back to 'Now shrinketh rose". This is from MS. Harley 2253, one of the most important manuscript collection of medieval poetry, which dates to the early fourteenth century. You can read about it here and see pictures of it here.

Here's a reading of 'Now shrinketh rose' in Middle English. 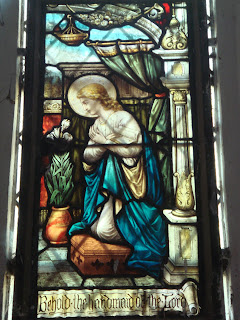 From Petresbourh in o morewenyng,
As y me wende o my pleyghyng,
On mi folie y thohte;
Menen y gon my mournyng
To hire that ber the heuene kyng,
Of merci hire bysohte:
'Ledy, preye thi sone for ous
That ous duere bohte,
Ant shild vs from the lothe hous
That to the fend is wrohte.'

My herte of dedes wes fordred,
Of synne that y haue my fleish fed
Ant folwed al my tyme,
That y not whider I shal be led
When Y lygge on dethes bed,
In ioie ore into pyne.
On o ledy myn hope is,
Moder ant virgyne;
We shulen into heuene blis
Thurh hire medicine.

Now wither the rose and lily-flower which once bore a sweet scent, in summer, that sweet season; there is no queen so powerful or mighty, nor any lady so bright in chamber, that death shall not come upon her. He who wishes to forgo bodily lusts and win the joys of heaven, let his thought be ever only on Jesu, whose side was pierced.

From Peterborough one morning, as I went out to amuse myself, I thought upon my folly; I made appeal in my sorrow to her who bore the heavenly king, and beseeched her for mercy: Lady, pray for us to thy Son, who bought us at such a price, and shield us from the hateful house that is prepared for the devil.

My heart was terrified for all the sinful deeds with which I have fostered my flesh, and followed all my life. I do not know where I shall be led when I lie on my death-bed, whether to joy or suffering. In one lady is all my hope, mother and virgin; we may come into heaven's bliss through her medicine.

Better is her medicine than any mead or any wine; her herbs smell sweet. From Caithness to Dublin there is no doctor so good for the healing of our sorrows: the man who feels any grief and wishes to forsake his folly, without gold or any treasure may be made whole and well [by turning to her].

Penance shall be such a man's plaster. I will ever serve her, now and all my life. Now all those who were ever enslaved are free, all because of that lady, beautiful and slender. Praised be her five joys! Wherever there is anyone sick, let them go to her joyfully; through her both maiden and wife are brought to bliss.

You who rule the bowers of heaven, have pity on our sins, for the sake of him who gave his body on the tree! Women, in your jollity, think on the pains of God: though you may be fair and beautiful to look at, your flowers shall fall. Jesu, whom all this world honours, have mercy on us. 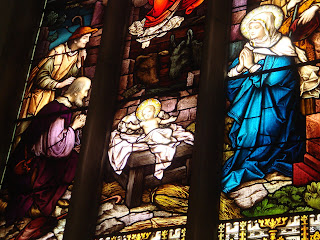 The first and last pictures are from Dorchester Abbey, Oxfordshire; the one in the middle is from the church at Binsey, just outside Oxford.
Posted by Clerk of Oxford at 10:55 am