It's Jane Austen's birthday today, and since I was in Winchester last week and took a couple of Austen-related pictures, here they are, with some additions from Bath last year. Happy birthday, Jane! You got to me when I was ten years old, and no writer has had such lasting influence on me; I owe you a very great debt.

This is the house where Jane Austen lived in Winchester, in the last few months of her life: 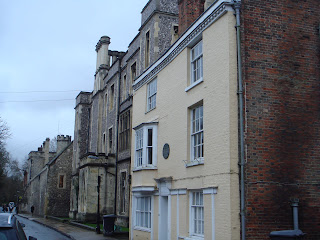 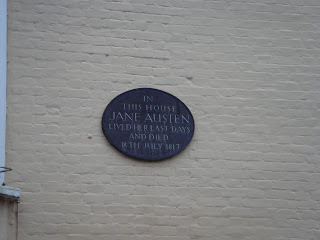 It's right next door to Winchester College, which for some reason I find amusing. I wonder how the Austens got on with the little Wykhamists, whose motto 'Manners makyth man' might be an appropriate epigraph for some of Austen's own work.

(Because it does not mean, as some internet sites claim, 'good manners are all that count', but something much less shallow: Middle English manere has a broad range of meanings, and should really be translated 'conduct' or 'behaviour'. William of Wykeham, the founder of Winchester College and New College, Oxford, who chose this motto for himself and bestowed it on his educational institutions, had risen from humble origins himself and certainly did not intend to say that etiquette was all that mattered in the world! The motto could be paraphrased, 'It is a man's actions (and not his birth, wealth, breeding or anything else) that make him a good man'. And wouldn't Jane Austen agree with that? If that's not the theme of Mansfield Park, I don't know what is.)

The house and Winchester College: 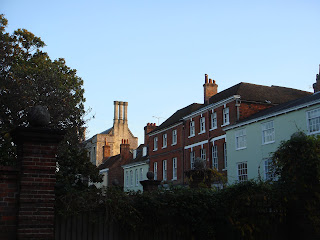 This is Jane Austen's grave in Winchester Cathedral: 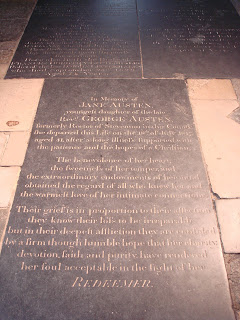 The side-aisle where she is buried: 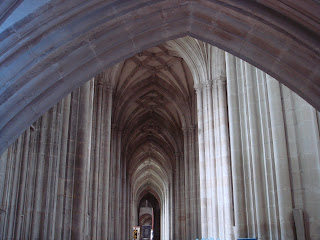 A later memorial to her, on the wall by the grave: 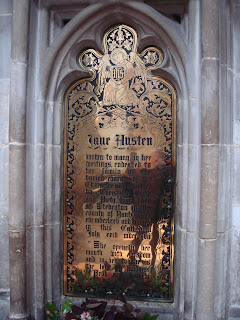 "She openeth her mouth with wisdom, and in her tongue is the law of kindness." I have to say that kindness is not the first virtue one would connect with Jane Austen's sharp tongue, but never mind...

This picture was taken from her grave (sadly it doesn't show the splendid Christmas tree which is only just out of shot, in front of the west window): And here's the nave; the grave is on the left-hand side, though not visible in this picture: 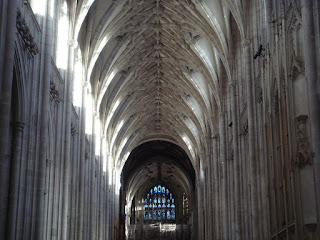 Here are some pictures from Bath. 'Jane Austen lived here', in Sydney Place: 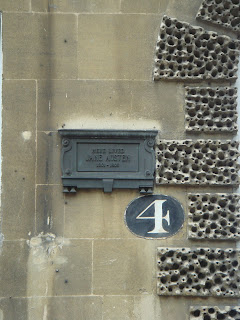 Winchester Cathedral's most famous saint is, of course, St Swithin, and this church, St Swithin's, Walcot, in Bath, is where Jane Austen's parents were married in 1764: 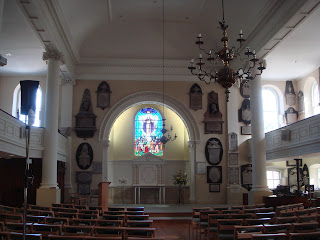 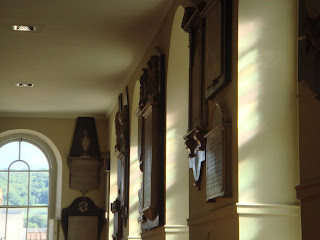 We may lament the loss of the medieval church, but the Georgian replacement is an elegant building with lots of light: 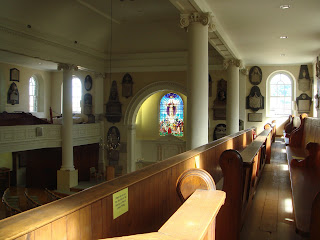 And some lovely windows: 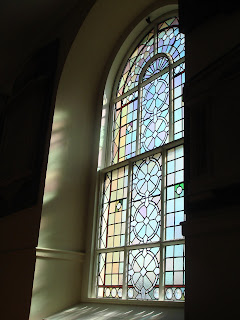 Dear, dear Jane -- I certainly read her at a much older age than you. As far as visiting the places, that side of my English experience still lies in the future.

I hope you get to make the trip one day! Bath in particular is wonderful for Austen fans - walking around the city somehow helped me to understand certain scenes in the novels (especially in Persuasion) a lot more clearly.

I've been meaning to visit her house in Chawton again, too, one day...