I'm afraid blogging here has been a little slow lately, but I'm hoping that will change over the next few weeks: Passiontide calls to mind an endless stream of wonderful poetry, and I've also been visiting some beautiful places I intend to post about. But in the meantime, since I don't have anything in particular to say, let me share a few pieces of music which I've encountered today.  This morning, in the snow, I went to Christ Church Cathedral. The music was Vaughan Williams' Mass in G Minor (and this is the choir of Christ Church singing it):

And the simple, yet extraordinarily beautiful 'O taste and see', also by Vaughan Williams:

And unexpectedly, and best of all, Henry Purcell's 'Hear my prayer':

I have a very great fondness for this piece because it features at the end of my favourite film of all time, Powell and Pressburger's 1944 film A Canterbury Tale, which is set in the lanes and villages around Canterbury and which begins like this. How could you not love a film which begins with Chaucerian pilgrims?  But the pilgrims in this film are from the twentieth century, brought to Kent by the war: a British soldier, about to be sent overseas, a land-girl mourning the loss of her fiance, and a homesick American GI.  They all unexpectedly find themselves to be pilgrims in search of blessings, and at Canterbury they each find (spoiler alert!) the different miracles they've been searching for.  My favourite character is the British soldier, a cynical young man who trained as a church organist but has given it up to play in a cinema, and with it given up his idealism and faith in anything greater than himself. The most bitter and sardonic of the three, he doesn't believe himself in need of a blessing; but he walks into Canterbury Cathedral at the end of the film, amid the weird, unearthly sounds of choirboys singing 'Hear my prayer', and meets the cathedral organist... and from that moment all his cynicism begins to fall away.

I could talk about A Canterbury Tale all day, but this excellent article really says it better than I could.  Do watch the speech in this clip, though; it encapsulates everything most lovable about this film, and its use of Chaucer, Canterbury and pilgrimage.

As I said, this morning it was snowing heavily - it took everyone by surprise, even the Met Office.  This was Christ Church in the snow, with a flock of black-clad choristers hurrying back to the warmth: 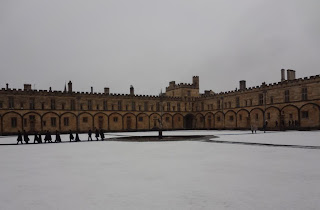 But by this evening, after a day of rain, the sun came out and all the snow was gone as suddenly and unexpectedly as it had arrived.  When it melted, it left puddles and streams everywhere, which seemed particularly appropriate, because the last piece of the musical puzzle from this morning was Psalm 126:

1 When the Lord turned again the captivity of Sion : then were we like unto them that dream.
2 Then was our mouth filled with laughter : and our tongue with joy.
3 Then said they among the heathen : The Lord hath done great things for them.
4 Yea, the Lord hath done great things for us already : whereof we rejoice.
5 Turn our captivity, O Lord : as the rivers in the south.
6 They that sow in tears : shall reap in joy.
7 He that now goeth on his way weeping, and beareth forth good seed : shall doubtless come again with joy, and bring his sheaves with him. 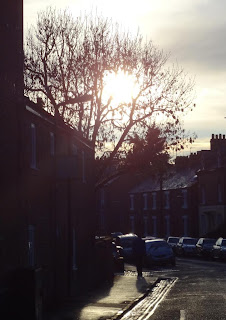 And when I hear this psalm I always think of Richard Rolle's interpretation of verse 5:

'That is, as the south wind blowing causes the frozen rivers to be released and to run, so by the Holy Ghost blowing in us we are released from sin, and we run towards heaven; and all our captivity, wherein we were kept captive under the devil, he turns into joy.'
Posted by Clerk of Oxford at 7:44 pm