'We hunger against hope for that lost heritage' 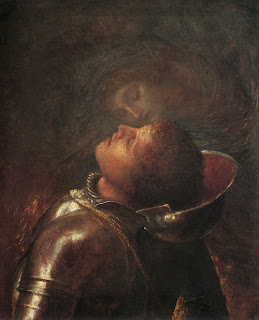 The Age Of A Dream

Imageries of dreams reveal a gracious age:
Black armour, falling lace, and altar lights at morn.
The courtesy of Saints, their gentleness and scorn,
Lights on an earth more fair, than shone from Plato's page:
The courtesy of knights, fair calm and sacred rage:
The courtesy of love, sorrow for love's sake borne.
Vanished, those high conceits! Desolate and forlorn,
We hunger against hope for that lost heritage.

Gone now, the carven work! Ruined, the golden shrine!
No more the glorious organs pour their voice divine;
No more rich frankincense drifts through the Holy Place:
Now from the broken tower, what solemn bell still tolls,
Mourning what piteous death? Answer, O saddened souls!
Who mourn the death of beauty and the death of grace. 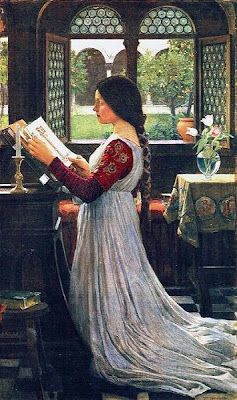 This little piece of wistful medievalism is by Lionel Johnson (1867-1902).  Johnson is a largely forgotten poet now, and his biggest claim to fame - such as it is! - is that he was the one who first introduced Lord Alfred Douglas, his friend at school and university, to Oscar Wilde.  So that's one legacy to literary history; a more substantial one is that he wrote the first critical study of Thomas Hardy's novels, published in 1894, before Hardy had quite finished writing them.  'The Age of A Dream' begins to make sense when we read that Johnson's DNB entry describes his time at Oxford thus:


Oxford reinforced his love of tradition, and, although one finds him beginning to associate not so much with the living as with those who enliven the literary gathering of his imagination, he was not yet the recluse of his later years.

Those later years were unhappy ones: he became an alcoholic, living alone in London, and died at the age of only 35.  The 1913 Catholic Encyclopedia entry (he converted to Catholicism in 1891) describes him as follows:

He was a small, frail, young-looking man, with a fine head and brow, quick of foot, gentle of voice, and with manners of grave courtesy. He greatly loved his friends in a markedly spiritual way, always praying for them, absent or present. His sound Catholic principles, his profound scholarship, his artistic sensitiveness, his play of wisdom and humor, his absolute literary honour, with its "passion for perfection" from the first, show nobly in his prose work.