2. O three persons in one unity
Being but one god and no mo, [more]
One in substance, essence and might,
O deus sine termino.

3. O, which hast made both day and night,
Heaven and earth round like an O
By thy wisdom and endless might,
O deus sine termino.

4. O, which of nought all thing hast wrought,
O verbum in principio,
O, without whom is wrought right nought,
O deus sine termino;

7. We beseech thee with all our might,
Ere we depart this world fro, [from]
Of forgiveness of our delicte [sins]
O deus sine termino;

8. Christ grant us grace, that we come may
To heaven's bliss, when we hence go,
Who died for us on Good Friday
Et regnat sine termino.

One of the points I like to emphasise on this blog is that (contrary to what many people mistakenly believe) medieval religious literature is often full of creativity, imagination and joy. Here's a perfect example: this is a witty, playful, exuberant medieval carol on the subject of - of all things - the Holy Trinity. I've heard many a solemn, pained sermon on the Trinity, complaining about how difficult it is for us to understand, how it's always been a stumbling block for believers and a trial to the unwary preacher. That's how our age approaches mystery and complexity; but in the fifteenth century, they wrote carols about it. That's how creative medieval religion could be.

The humour does need a little explaining, but that just helps to illustrate why this carol is so clever. The key is that the single letter 'O' in this carol is all of the following:

a) a vocative interjection, appropriate to a prayer
b) a sound commonly found in carol refrains
c) a reduced form of the word 'one'
d) a figure of eternity and infinity, a shape without an end (and thus of God, 'deus sine termino')
e) a representation of the earth, 'round like an o'

...all at the same time. Thus, the refrain 'O deus sine termino' means both 'O, God without end' and 'One God without end'; every phrase which begins 'O' is both an acclamation and a statement - 'O prince of peace' = 'One prince of peace', and so on. This insistent repetition of 'O' is obviously fitting for a song with a refrain which is a whole series of 'O's (the music for this song doesn't survive, but I imagine it to sound a bit like the refrain of No.3 on this album). It begins like any other carol with an 'o' refrain might, and then transforms that sound into its subject, the 'Oneness' of the Trinity. It all works aurally: notice that the centrality of the 'o' is reinforced by the fact that lines 2 and 4 of each verse rhyme on an 'o' sound. But it doesn't only work aurally - verse 3 encourages you to picture the shape of the letter, 'heaven and earth round like an o', and this draws in the idea of 'o' as a representation of infinity, eternity (sine termino), which is helped by the fact that in Middle English the word 'o' can mean 'ever, eternally' (citations here). The carol works on at least five different levels for the eye and ear and imagination; it's just the most perfect combination of theme and literary expression, poetic language at the service of a concept which is beyond words. There's something wonderful about an approach to mystery which rather than disclaiming language ('there's nothing to say about the Trinity') instead tries to make more of it, to heap meaning upon meaning, to delight in ambiguity and possibility and richness.

This carol comes from the collection of carols compiled by the Franciscan friar James Ryman, a manuscript which is now Cambridge University Library MS. Ee 1.12 (I've modernised the spelling, but you can read the original here). There are in fact no fewer than nine different carols in honour of the Trinity in Ryman's collection, although I think this is the best.

It seems fitting to include here a few of the many medieval images of the Trinity which form the visual equivalent to these carols' literary exuberance. Here's one from a fifteenth-century English Psalter (Royal 2 B VIII f.101v), roughly contemporary with the carol: 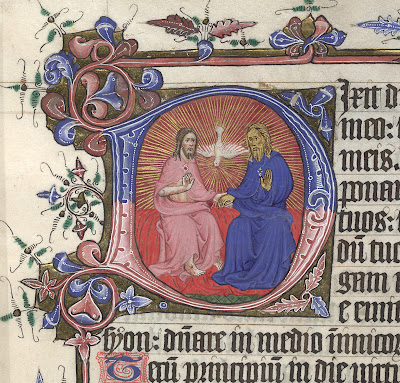 The rays of light and the clasped hands are so beautiful! 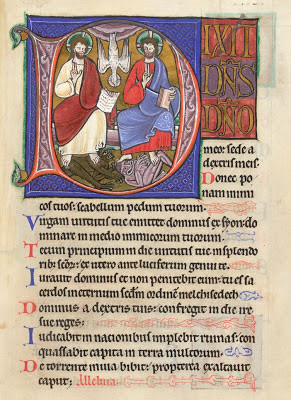 As you see, one common way of depicting the Trinity is to show two human figures with a dove between them (and sometimes with devils beneath their feet, as here!). In the image below (from Harley 2897, a fifteenth-century French manuscript) the wings of the dove draw them together by touching both their lips: 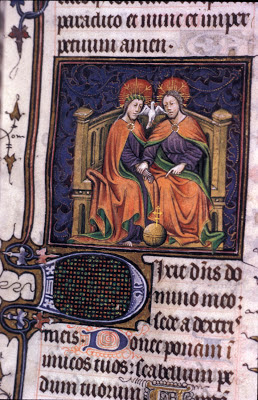 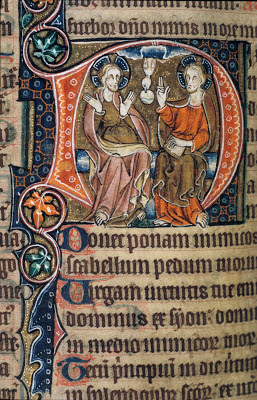 Several of these images are within the round part of a capital D, for the psalm which begins 'Dixit dominus' ('The Lord said unto my Lord, 'Sit thou at my right hand'...), traditionally interpreted as a reference to the relationship between Father and Son. The figure on the left side of the picture is therefore Christ, as indicated in the images above by a crown of thorns or visible wounds.

There are other ways of depicting the Trinity, though; this is from an Anglo-Saxon manuscript (Harley 603, f.1) and it's not as eye-catching as the others, but take a close look at the tender embrace of Father and Son, and the orb of the world held between them: 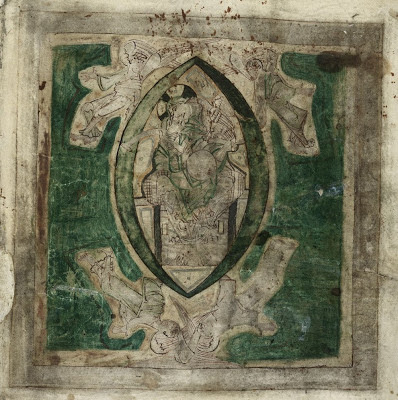 From the ever-wonderful Royal 2 B VII, there are two different depictions of the Trinity; one in the style we've already seen (f.233v): 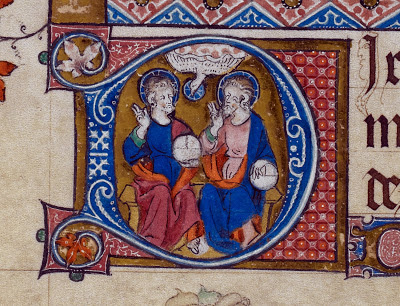 Even the dove has a halo! The other is of a common type depicting the Father holding the crucified Son, a 'Throne of Mercy' image (f. 299): 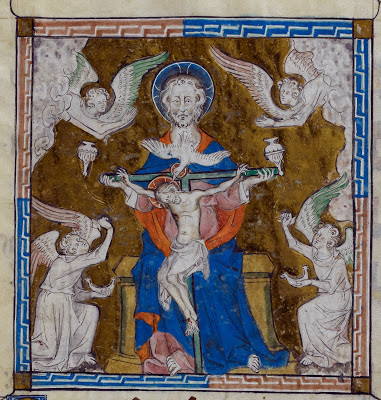 There are many examples like this, but this bright one is perhaps my favourite (Arundel 302, f.156): 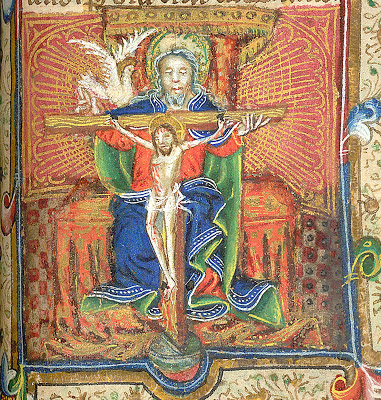 Here the Trinity is joined by the man who paid for the manuscript to be made, an alderman of London named William Melreth (Arundel 109 f. 262v): 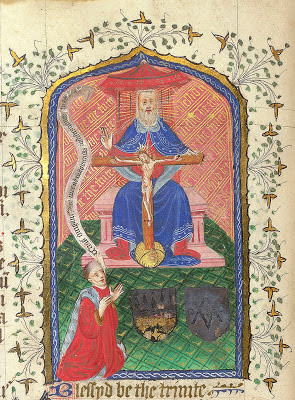 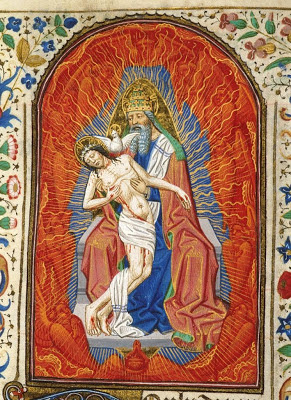 (Notice that the background is made up of angels, crowded within the light).

For a non-manuscript example, we can look to the church of Westhall in Suffolk, a treasure-house of late-medieval art, where this carved wooden Trinity is very high up in the roof of the chancel: 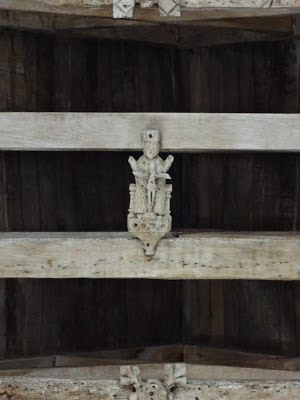 The person who carved this did not have a camera with a zoom lens, like me - but he still thought it was worth articulating the folds of drapery and the roundels of the throne, even if no one was going to see it.

And let's finish with this illustration from a English Breviary (Egerton 3035, f.1), not because it's particularly special as depictions of the Trinity go, but because it's always important to be reminded that the artist, and the people who used the book, apparently had no problem with the idea that there might be, side-by-side, a beautiful and profound image of the Trinity and a trumpet-playing man riding a fantastic animal: 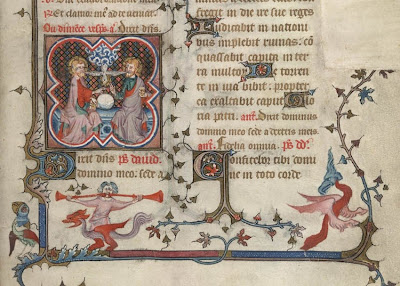 Thank you so much!
It was a real treat to open your blog today and find that wonderful carol, and the many, many beautiful illustrations, including again the amazingly loving Harley 603 one. Thank you very much indeed for sharing all this with us!

I thought of you as I was posting that one! I'm glad you enjoyed the post.

I don't comment as often as I should to tell you how much I appreciate your blog, but I truly do appreciate it. This post is especially interesting--it's wonderful to think of taking such joy in the mysteries of God.

It is wonderful, isn't it? Such a creative approach to mystery.

Do you know this bonny window at Ampleforth?

No, I didn't! That's beautiful - I love the background with the gold leaves/petals.

Ugh this is, as ever, so good.

Thank you! There is a lovely statue of the Trinity in Black Abbey, Kilkenny, Ireland. Happy Easter Oxford Clerk