A Homily for Rogationtide: Ælfric on the sun 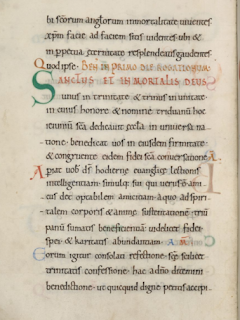 For the medieval church, the three days preceding Ascension Day were Rogationtide: a period of prayer, fasting, and processions around the countryside, asking for God's blessing on the land and the crops of the future harvest. There's a useful history of the tradition here, which explains:

the Rogation Days developed into a popular festival, celebrating the arrival of spring and serving other purposes as well... In some parishes, the procession took more than one day and the whole business became an occasion for several days of picnics and revels of all sorts, particularly among those who trooped along at the fringes of the religious aspects of the procession.

The route of the walk was around the boundaries of the parish, which was a civil as well as a religious unit. Thus, the processions were useful in teaching people, particularly the young, their parish boundaries. Known as "beating the bounds," the processions customarily stopped at boundary marks and other significant landmarks of the parish, such as a venerable tree, or a great rock, or perhaps a pond. The priest would read the Gospel and perhaps affix a cross to the landmark. Then the boys of the parish would suffer some indignity intended to help them remember the spot. Boys were bumped about against rocks and trees, thrown into the water, held upside-down over fences, thrown into bramble patches, or beaten with willow wands--and then given a treat in compensation. In later times, the marchers beat the boundary marker with the willow wands, beating the bounds, rather than the boys.


For medieval parishioners, Rogationtide was a season to be mindful of the relationship between human bodies and the physical space they inhabit - to touch and mark its boundaries, to feel the earth beneath their feet, and to bless and give thanks for the food the land brings forth. It reflects a belief in the profound connection between humans and the natural world, bound together by ties of gratitude and gift, as well as an appreciation for the abundance of nature as the visible expression of God's creative power and loving care.

These days were particular occasions for preaching, and because of this there are multiple Old English homilies for Rogationtide surviving from Anglo-Saxon England. (A useful edition is Eleven Old English Rogationtide Homilies, ed. Joyce Bazire and James E. Cross). The prolific tenth-century homilist Ælfric wrote homilies for each of the three days in Rogationtide, which can be read online here. He opens the first one by saying:


[These days are called Letaniae, that is, 'Prayer-days'. On these days we should pray for abundance of our earthly fruits, and for health and peace for ourselves, and, what is still greater, for the forgiveness of our sins.]

Gebeddagas is one Old English name for these days; another, gangdagas, 'walking-days', refers to the processional character of the season (this name survived into the modern era). In his three homilies Ælfric talks about subjects as varied as the history of the Rogationtide observances, the value of penitential fasting, a detailed exposition of the Lord's Prayer, the doctrine of the Trinity, and the relationship between body and soul. Here's an extract from the third homily, in which Ælfric explores the Trinity by discussing the nature of the sun.

'The sun which shines above us is a physical creation, but nevertheless has three properties: one is its physical substance, that is the orb of the sun; the second is the light or brightness which is always shining from it, which enlightens the whole world; the third is the heat, which comes to us with its beams. The light is always coming from the sun, and is always with it; and the Son of Almighty God is always begotten of the Father, and always dwelling with him. The apostle said of him that he was the brightness of his Father's glory. The sun's heat proceeds from it and from its beams, and the Holy Ghost is always proceeding from the Father and the Son equally. About this it is written, 'There is nothing which can be hidden from its heat'...

We speak about God - the mortal about the immortal, the weak about the almighty, wretches about the merciful. But who may worthily speak about that which is beyond speech? He is without measure, because he is everywhere. He is without number, because he is eternal. He is without weight, because he upholds all creation without labour; and he ordained it all with three things, that is, measure, number and weight. But know that no man can speak fully about God, since we cannot even search out or reckon up the creation which he made. Who may speak in words of the ornaments of the heavens, or the fruitfulness of the earth? or who may sufficiently praise the course of all the seasons, or all other things, when we cannot even fully comprehend with our sight the physical things which we can see? Just so, when you see the man in front of you, at the time when you see his face, you cannot see his back. And if you look at a piece of cloth, you cannot see the whole thing all together; you turn it around so you can see it all. What wonder is it then if Almighty God is beyond words and beyond comprehension, who is everywhere all and nowhere divided?

Now some man of shallow thoughts may ask how God can be everywhere in one, and nowhere divided. Consider the sun, how high it climbs, and how it sends its light throughout the whole earth, and how it enlightens all the earth which is inhabited by mankind. As soon as it rises up at dawn, it shines on Jerusalem, and on the city of Rome, and on this land, and on all lands together; yet it is a created thing, and moves at God's command. Now, think how much greater is God's presence, and his power, and his visitation everywhere. Nothing withstands him, neither stone walls nor broad barriers, even though they withstand the sun. To him nothing is hidden or unknown. You behold a man's face, but God beholds his heart. God's spirit tests the hearts of all men, and those who believe in him and love him, he purifies and gladdens with his visitation, and the hearts of unbelieving men he passes over and shuns.' 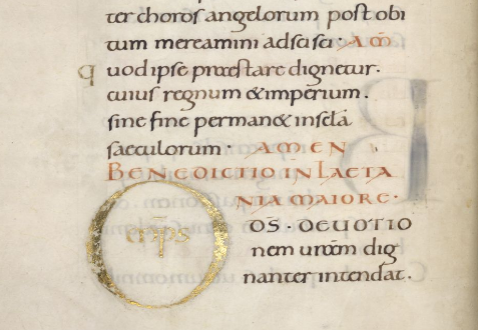 Opening of the blessing for Rogationtide in the Benedictional of St Æthelwold
(BL Additional MS. 49598, f.61v)

The image of the sun comes from St Augustine (Ælfric says he will explain the Trinity swa swa se wisa Augustinus be ðære Halgan Þrynnysse trahtnode), but there's an implicit relevance to the Rogationtide context: Ælfric talks about how the fruitfulness of the earth, the course of the year and the seasons illustrate the gap between divine knowledge and human perception, and of course that's precisely the gap Rogationtide seeks to bridge by asking for God's blessing on the earth. The nature of the sun is a good topic for a summer sermon, since if you are engaged in praying for a good harvest, the sun's light and heat which make the crops grow are like God's favour made visible. (Perhaps it was a sunny May day when Ælfric wrote this homily, and he imagined the congregation looking up at "the sun which shines above us".) And if Rogation processions actively take God's presence out into the world, consecrating the area beyond the church walls as sacred space, Ælfric's emphasis on the omnipresence of God - permeating further even than the light of the sun - is a reminder to his congregation that by processing they are in a way participating in this spreading of God's presence. Rogationtide processions follow the boundaries of the parish, reinforcing territorial markers, and encircling fields, woods, orchards, as blessed and sanctified space; but Ælfric tells us that God's presence has no boundaries, for him ne wiðstent nan ðing, naðer ne stænen weall ne bryden wah; 'nothing withstands him, neither stone walls nor broad barriers'. 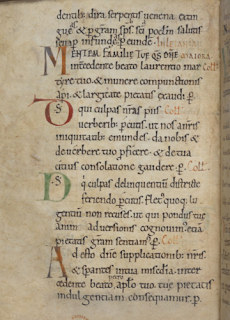 You may also be interested in a post I wrote some years ago about the tradition of 'beating the bounds' in Oxford. I participated in a procession one year, and have never seen the city quite the same way since. Criss-crossing Oxford with sticks in hand, we traced the invisible borders of its patchwork of parishes through busy shops and green quads, down hidden lanes and through garages and storage-rooms, leaving chalk crosses wherever we went, and asking blessings on it all.
Posted by Clerk of Oxford at 2:04 pm