Waltheof among the Saints 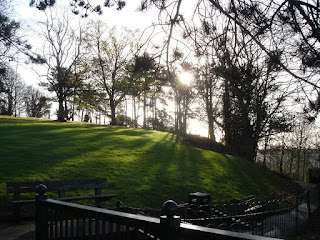 Today is the anniversary of the execution of Waltheof, Earl of Northumbria, the most high-profile English victim of the turbulent years which followed the Norman Conquest. When the young earl was beheaded on St Giles' Hill in Winchester (above), early in the morning of 31st May 1076 - a decade after the Battle of Hastings - the best hope of Anglo-Saxon rebellion died with him.

Waltheof was the English-born son of a Danish Viking, a descendant on his mother's side of the ancient line of the earls of Bamburgh, and on his father's side of a bear (no, really). He was born c.1050, into the most powerful family in the north: his formidable father Siward ruled all of England north of the Humber, bringing a bit of Viking awesomeness to Edward the Confessor's feeble reign. But in 1054 Siward's oldest son was killed in battle (against Macbeth) and the following year Siward himself died, leaving the child Waltheof too young to inherit his father's earldom, or anything more than a grand family legend. But Waltheof might reasonably have grown up expecting great things from his future life.

He belonged to an unhappy generation: those who were in their teens at the time of the Norman Conquest, old enough to see what was happening, too young to do anything about it. The varying fates of these young people vividly capture the imagination - an entire generation made exiles, whether they stayed in England or went abroad. Waltheof's close contemporaries include Edgar Ætheling, heir to the kingdom, whose unsettled life forms a sad coda to the greatness of his ancestors among the kings of Wessex; his sisters Margaret, queen and saint, forced into marriage with the king of Scotland, and the forceful Christina, who spent her life as a nun and fiercely protected her sister's daughter from danger; Harold Godwineson's children, who variously became Vikings and runaway nuns; their cousins, Tostig's sons, who ended up as advisers to the king of Norway; Osbern, monk and hagiographer, champion of Anglo-Saxon saints; and more who remain nameless or whose fates are lost to history.

Waltheof, probably too young to fight at Hastings, at first submitted to the Conqueror, but in 1069 he rebelled and took on a Norman army in battle at York, single-handedly cutting down the enemy one by one as the city burned around him. In another age he might have been a famous warrior; he even had an Icelandic skald who composed poetry in his honour (Þorkell Skallason). But his life was to be shaped by political circumstance, not deeds of valour. He made peace with the king, was given his father's former earldom, and even married William's niece (their daughter, long after Waltheof's death, was to marry St Margaret of Scotland's son). The truce did not last: Waltheof joined the Revolt of the Earls in 1075, although the extent of his complicity is not entirely clear. The consequence of this second rebellion, imprisonment for treason and a hurried execution at Winchester after a year in captivity, was controversial; he was the only nobleman executed under William the Conqueror, and to the end he was protesting his repentance with no less a person than Archbishop Lanfranc to vouch for him. 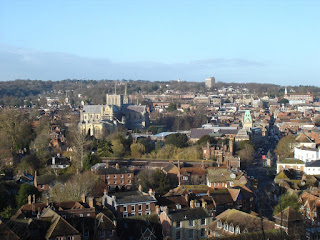 One man's traitor is another man's martyred freedom-fighter, and as soon as Waltheof was dead there were people ready to call him a saint and martyr. He had been a patron of Crowland Abbey in Lincolnshire, and the monks were given permission to retrieve his body from Winchester for burial there. Crowland legend later said that as Waltheof knelt before the executioner he began to say the Lord’s Prayer, but was not able to complete it because his voice was interrupted by tears. After his head was cut off, a clear voice completed the prayer in the hearing of all who were present, saying, ‘But deliver us from evil, Amen’. 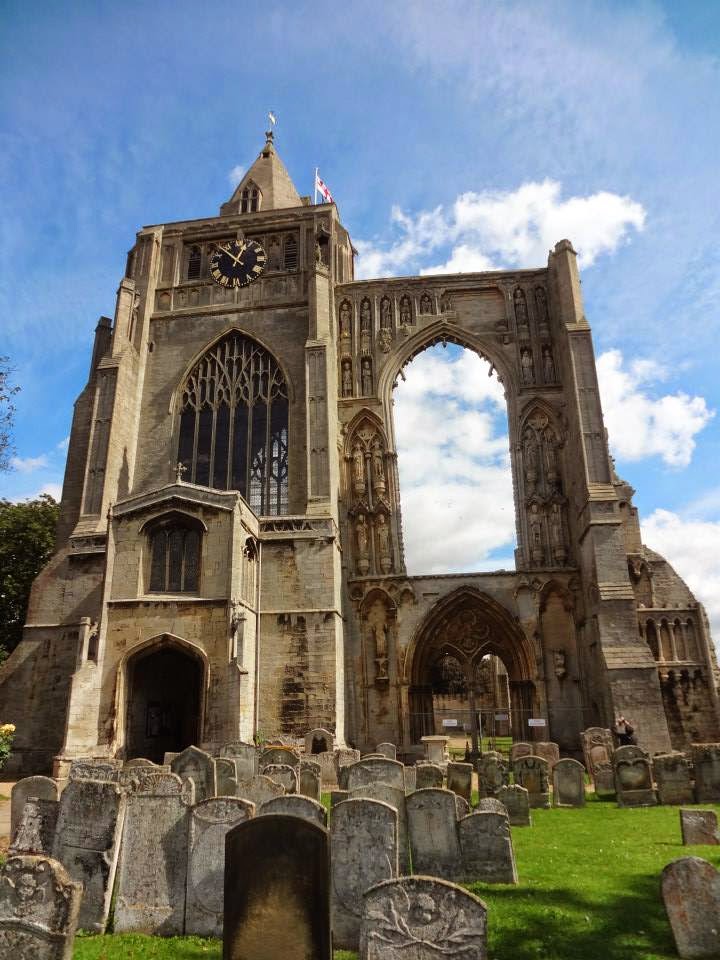 In the 1090s miracles began to be recorded at Waltheof's tomb; according to one chronicler (Orderic Vitalis) “the news of them gladdened the hearts of the English and the populace came flocking in great numbers to the tomb of their compatriot, knowing from many signs that he was already favoured of God”. The monks of Crowland wrote or commissioned various texts in support of Waltheof's sanctity, many of which can be read online (in Latin) here. His saintly cult never spread far beyond Crowland, but his fame as a warrior reached as far as Scandinavia and Iceland; here's one late Icelandic narrative about his supposed exploits. 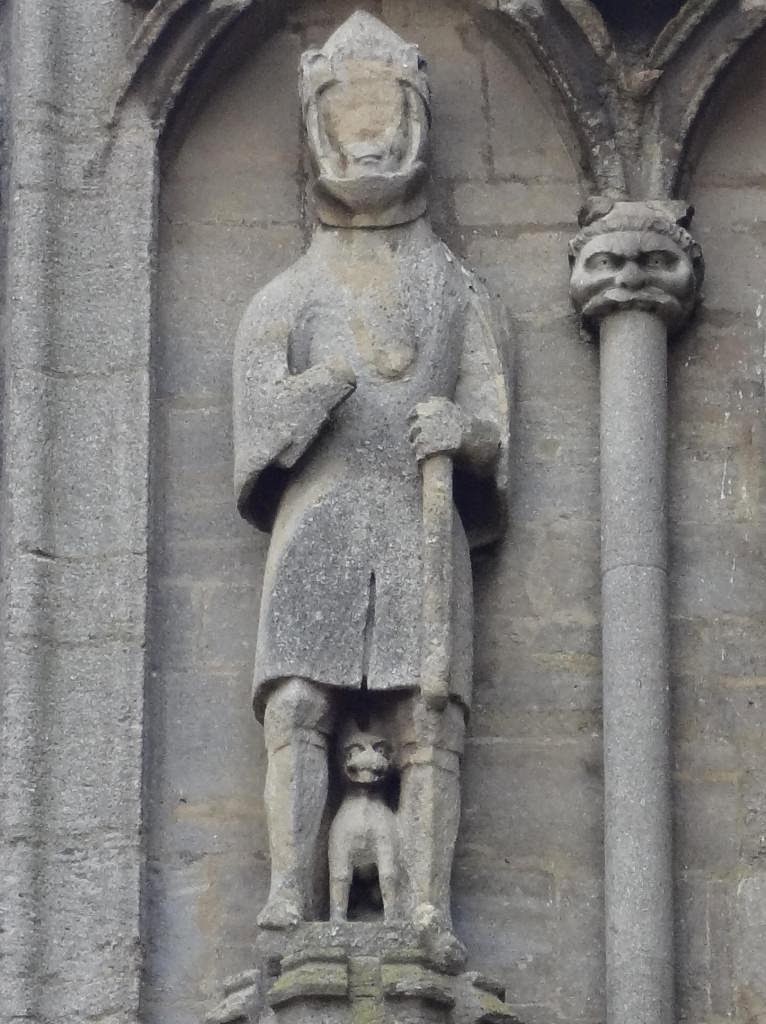 Waltheof on the west front of Crowland Abbey

One memorable miracle story from Crowland tells of a vision which the abbot had, one night after he had encountered a Norman monk who denied Waltheof was a saint because “he was a false traitor who had deserved execution as a punishment for his guilt”. Abbot Geoffrey rebuked him, and the monk was soon taken ill and died a few days later. Then Geoffrey had a vision of Waltheof accompanied by the two patron saints of Crowland, the Apostle Bartholomew and Guthlac. He saw that Waltheof's head was once again joined to his body, and the saints acclaimed Waltheof:


[Bartholomew] said, ‘Headless no more’. Guthlac, who was standing at the foot of the coffin, said in reply, ‘That was earl heretofore’, and the apostle completed the verse with the words, ‘Now is king evermore’. When the abbot had heard and recounted these things he gladdened the hearts of the brethren, and glorified God for his unfailing mercy at all times to true believers.

Poor Waltheof! His earldom never brought him much but trouble, and he was never fated to be an earthly king (though it has been suggested he might have had a claim to the English throne, and that was why William was so keen to execute him). But at least the monks of Crowland thought he had a heavenly crown. 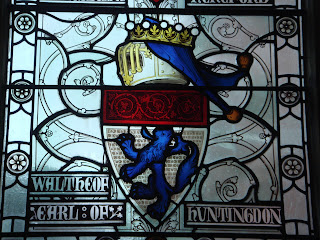 The invented arms of Waltheof in the Great Hall at Winchester
Posted by Clerk of Oxford at 11:04 pm

I very much enjoyed reading this article about Waltheof. I've been digging into my family tree and have discovered that he is my grandfather through both of his daughters. This has made me want to find out more about him. I'm very sorry he met such a terrible end. Maybe he didn't make the best decision which resulted in losing his life but who knows what any of us would have done in that same situation? I think he was a good man and a great warrior and I'm proud to have him for my grandfather. I just wish he had been blessed with a happy marriage and a long life!

How interesting! Waltheof is definitely an ancestor to be proud of. I feel very sorry for him, really - he was a victim of circumstances more than anything else.

There is a yearly Eastern Orthodox pilgrimage at Crowland Abbey. This year it will be led by an Archbishop on Saturday 8th July. The services are in English. All are very welcome. At the Abbey there is the skull of St Theodore, the abbot of the monastery who was martyred by the Danes. You can actually see the wound where he was struck.