A Glow of Colour in a Country Church

Two miles south of Canterbury is a tiny hamlet with the somewhat unappealing (though unimpeachably Anglo-Saxon) name of Nackington. It consists of little more than a church and a few houses, and the church is very small - but it contains a treasure.

Nackington appears in Domesday Book, and early in the twelfth century its church, St Mary's, came into the possession of St Gregory's Priory in Canterbury, Archbishop Lanfranc's new foundation which so annoyed the monks of St Augustine's.  This connection to the city is important, as we will see in a moment.  But first, enjoy the odd shape of this funny up-and-down church, which has nearly fallen down and been rebuilt several times in its history:

Here's the best welcome a church can offer - an unlocked door and a quotation from Julian of Norwich:

'Our courteous Lord willeth that we should be as homely with Him as heart may think or soul may desire. But let us beware that we take not so recklessly this homeliness that we leave courtesy.'

The church is simple on the inside, and I didn't manage to photograph it particularly well, so let's move swiftly on to the church's treasure.  For this we have to go to the north wall of the chancel, beside the altar.  And there we find this:

These two windows date to the thirteenth century, and are very similar in style to the medieval glass of Canterbury Cathedral; look at these examples for comparison. They've moved around within the church, and were restored in 1935, but otherwise are substantially what they were eight hundred years ago.  I couldn't ascertain whether it's known how and why these windows came here - if they were originally made for the cathedral, or have always been here (different sources suggested various possibilities).  Either way, this is the man who was thirteenth-century Canterbury's saint of the moment, Thomas Becket:

I've posted about other early Kentish depictions of Thomas Becket at Godmersham and Brookland, and this is the cathedral's famous Becket window (which is, incidentally, about three times bigger than Nackington's).

This is just breathtaking in every way - the colours especially, but also the faces and hands.

At Becket's right hand is the penitent Henry II (labelled as such - 'Henricus Rex'):

And an unidentified figure, perhaps another king:

The Becket panel was my favourite, but above it is something hardly less remarkable - the wedding at Cana:

It's interesting to compare this to the same scene at Canterbury Cathedral; only this one has a patterned tablecloth!

The colours are, again, extraordinary; look at the red and blue here:

Above the golden arch which marks out this scene is another unidentified figure, with a book:

The other window has three figures, which seem like the remnant of a more developed composition (a Jesse tree, perhaps?). At the top is a crowned female figure, presumably the Virgin Mary:

Below her the unmistakeable King David, with his harp: 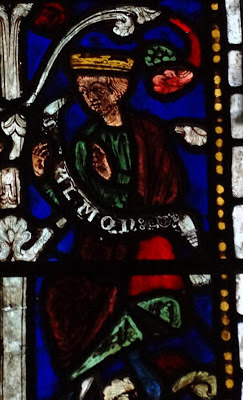 Finally, there's this, which is very pretty, but I don't know how old it is:

The colours of these windows are like jewels, and in Canterbury Cathedral, where there are hundreds of them, they dazzle like a king's treasure-house, or like the passage from Isaiah which the cathedral's Stained Glass Studio quotes on their website: 'I will lay thy stones with fair colours, and lay their foundations with sapphires; and I will make thy windows of agates, and thy gates of carbuncles, and all thy borders of pleasant stones.'  You might think that by comparison with that glory, two much smaller windows in a far less impressive setting might lose something of their power.  Somehow the effect was the opposite.  If the riches of the cathedral foreshadow Isaiah's city of God, stumbling across the rubies and sapphires of these windows in a deserted country church, far from the bustling crowds of the ever-busy cathedral, felt like a private and personal discovery - like finding the 'treasure hid in a field'.

One or two more pictures of the little church; here's the bell-tower:

The main altar, and beside it a chapel mostly filled with (stacking chairs and) monuments to the Milles family:

The other windows in the church can't match their medieval companions, though the west window's baby Christ - in a 1920s nightgown! - is endearing:

As is the baby angel above:

There's something 'homely' about all this, not quite in the sense Julian uses that word, but in a way that speaks of the love and care which has gone into preserving this church - even when it was half falling down! - over all the centuries of its life.  The wooden chancel screen is inscribed with the names of the local men who carved it in the early part of last century, and in this book, published in 1800, Nackington church is described as 'kept very neat and in good repair'; and so it is still.  'Where your treasure is, there will your heart be also', and this place has much of both.
Posted by Clerk of Oxford at 11:08 pm

Really quite special, thank you. Is there a reason the angel is holding the arms of St. John's, Oxford?

I don't know - I was wondering that too! The window was given in 1924 by Charles A. Beer in memory of his parents, Isaac and Jane Beer, but I haven't been able to find any connection between them and St John's.

Thanks for the post - these windows are really a treasure! The church is beautiful also. I love Chartres and St. Chapelle, but sometimes it is easier to appreciate windows when there are fewer of them.

Very true! Thanks for commenting.

I am enthralled by your photos of the remains of what must have been a Jesse Tree window. It is interesting at even at this early date (I assume that this is a 13th century window) there is experimentation with the placement of Kings David and Solomon. They resemble much more the Jesse Trees one finds in many illuminated manuscripts that the static frontal form of St. Denis or Chartres or even nearby Canterbury. I assume that the Jesse figure was lost. From the position of St. Mary, there must have been an infant Jesus at her feet at some point it time as one sees in some Nativity scenes.

Thank you, that's very interesting - I was struggling to imagine where the infant Jesus would fit in. You can't see it in my picture but the bottom third of the window is lost (it's now clear glass with that Star of David set in it), so I assume that's where the Jesse figure originally was.