Some Miracles of St John of Beverley: 'an hende neybur and of our knowyng' 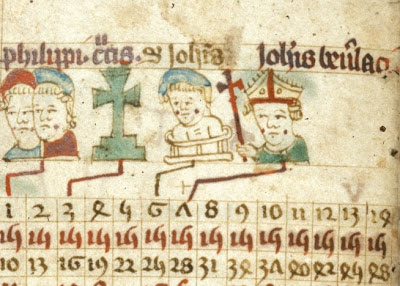 7 May is the feast of the Anglo-Saxon bishop St John of Beverley (shown with cross and mitre in the image above), who died in 721. Most of our evidence for John's life is provided by Bede - John actually ordained Bede, as a deacon and a priest, which is itself a pretty good claim to fame! John was educated under St Hilda at Whitby, became Bishop of Hexham and then of York, and in old age retired to a monastic life at Beverley, where he was buried. Bede describes a number of his miracles of healing, but his posthumous reputation was nonetheless far out of proportion to the rather scanty evidence for his life, and by the later Middle Ages his shrine attracted pilgrims from all over England. Two colourful miracle stories illustrate the vitality of his legend, centuries after his death. First, a miracle recorded by William of Malmesbury in the first half of the twelfth century:

John, a man of exemplary virtue, finds a well-known eulogist, Bede, in his History of the English. But he lives up to his praises even now, and his miracles are not yet over. The most noteworthy is the one made into a show by the inhabitants of Beverley, where he lies buried. Savage bulls are brought up, tied fast, by strong men sweating profusely; but as soon as they enter the churchyard they lose all their ferocity and become, you might suppose, no more than innocent sheep. So they are untied and left to frolic in the yard, though previously they used to go for anything in their way with horns and hooves. 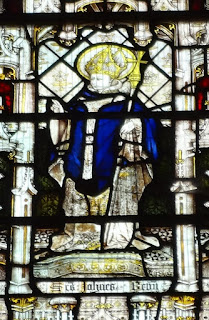 John of Beverley in a 15th-century window, All Souls' chapel, Oxford

And another miracle from a letter of Edward I, written in 1301 to demonstrate the ancient history of England's rights over Scotland (despite the reference to Athelstan, the story is not attested before the mid-twelfth century):

It is worthy to be remembered that this same Athelstan, on the intercession of St John of Beverley, formerly archbishop of York, overcame the Scots who were in rebellion against him. Devoutly giving thanks to God, he besought Him in prayer that by the intervention of the blessed John he would show him some manifest sign, by which men present and to come could recognise that the Scots were rightly subject to the realm of England. When he saw some overhanging crags at a place near Dunbar, in Scotland, he drew his sword from its scabbard and smote upon the rock, which at the blow of the sword, by reason of God’s providence, was so hollowed out that the measure of an ell can be fitted in the length of it, and it may still be seen as a manifest record of this event. The deed is recited in the church of Beverley, every week throughout the year, as a miracle for the praise and honour of St John, when the life of St John is read, and there exists to the present day a solemn commemoration of it, both in England and in Scotland.

Tamer of bulls and bulwark of English imperial ambition - it's something of a mystery how a humble Anglo-Saxon bishop gained such a reputation! Rather more in keeping with what John and Bede might have wanted is Julian of Norwich, writing nearly 700 years after John's death, who describes how a vision of this saint was revealed to her:

For in thys syte myn understondyng was lift up into Hevyn, and than God browte merily to my minde David and other in the Old Law without numbre. And in the New Law He browte to my mynd first Mary Magdalen, Peter and Paul, and Thomas of Inde, and Saynt John of Beverly, and other also without noumbre, how thei are knowen in the church in erth with ther synnes, and it is to hem no shame, but al is turnyd hem to worship. And therfore our curtes Lord shewith for them here in party like as it is there in fulhede. For ther the token of synne is turnyd to worshippe.

And Seynt John of Beverley, our Lord shewid hym ful heyly in comfort to us for homlyhed, and browte to my mynde how he is an hende neybor and of our knowyng. And God called hym Seynt John of Beverley pleynly as we doe, and that with a full glad, swete chere, shewyng that he is a ful hey seynt in Hevyn in His syght, and a blisfull. And with this he made mention that in his youngth and in his tendyr age he was a derworthy servant to God, mekyl God lovand and dredand; and nevertheless God suffrid him to fall, hym mercyfully kepand that he perishid not ne lost no tyme. And afterward God reysyd hym to manyfold more grace; and be the contrition and mekenes that he had in his living, God hat goven hym in Hevyn manyfold joyes overpassing that he shuld hav had if he had not fallen. And that thys is soth, God shewith in erth with plentiuous miracles doyng aboute his body continuly. And al was this to make us glad and mery in love.

[In this vision my understanding was lifted up into Heaven, and then God brought joyfully to my mind David and others of the Old Law, without number. And of the New Law he brought to my mind first Mary Magdalen, Peter and Paul, and Thomas of India, and St John of Beverley, and others also without number, how they are known in the church on earth together with their sins, and that is no shame to them, but all is turned into honour. And therefore our courteous Lord showed this of them here in part, as it is there in fullness. For there the token of sin is turned to honour.

And St John of Beverley, our Lord showed him in glory as a comfort to us because of his familiarity, and brought to my mind how he is a kindly neighbour and known to us. And God called him 'St John of Beverley' simply, as we do, and did so with a very glad, sweet expression, showing that he is a very high saint in heaven in his sight, and a blissful one. And with this he made mention that in his youth and in his tender age he was a beloved servant of God, greatly loving and fearing God, and nevertheless God permitted him to fall, keeping him mercifully so that he did not perish nor was ever lost. And afterwards God raised him to manifold times more grace, and by the contrition and meekness which he had in his life, God has given him in heaven manifold joys surpassing those he should have had if he had not fallen. And that this is true, God shows on earth with plenteous miracles being done around his body constantly. And all this was to make us glad and merry in love.]

At first glance it's not quite clear why John of Beverley, of all English saints, should appear to Julian in the role of a comfortably familiar 'neighbour'; Beverley may be closer to Norwich than St Thomas' India, but it's still not exactly next door. However, one of the two different dates given in the manuscript sources for Julian's recovery from illness, and the visions which followed, is May 8, the day following the feast of St John of Beverley. Perhaps she felt close to John not only because he was a saint of her own country, but because she related her recovery from illness to his intercession. These days in some church calendars her own feast now follows his - so they're neighbours in another way.
Posted by Clerk of Oxford at 7:55 pm

I was looking for stuff on him and knew just where to go, here to your blog.