Denton is a very small place.  Its wikipedia article contains two sentences, and the first one tells you everything I know about it: 'Denton is a village near Canterbury in Kent, England'.  I don't suppose Denton church gets many visitors; for one thing, it's nearly impossible to find, though clearly marked on the map. You have to go up an unsignposted private drive until you spot a fingerpost that says 'to the church', which appears to be pointing to a field. Not believing the fingerpost, you'll drive straight past it until you get to a house, at which point you realise you've gone too far, and go back, and put your faith in the fingerpost after all. It leads you not quite across the field but along it, to what looks like a wood. And within the wood is the church and its churchyard, isolated from everything except the manor house next door, and so screened by its trees that you can't even see the house from the churchyard. 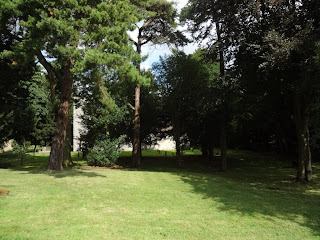 The manor house is Denton Court, home to a number of different families over the years; its most famous resident was the eccentric bibliophile Sir Samuel Egerton Brydges. You can read a little about the house at this link.  It sounds attractive, but I can't confirm anything of that description, because of its shielding trees; the church lives in its own world.

This is the view westwards from the church, that misleading field: 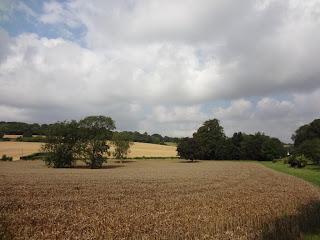 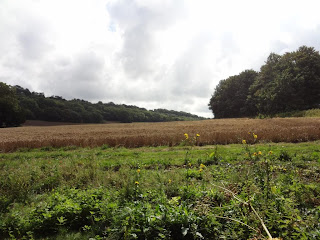 Thomas Gray visited Denton in the summer of 1766, staying with his friend the rector; he wrote after his visit that "the country is all a garden, gay, rich, and fruitful, and (from the rainy season) had preserved, till I left it, all that emerald verdure, which commonly only one sees for the first fortnight of the spring." 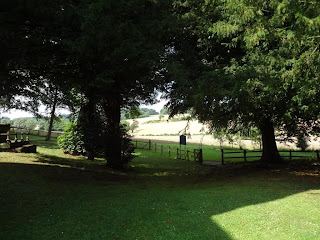 Denton certainly has one of the greenest churchyards I've ever seen, more like a garden than a graveyard. It's a peaceful place to rest, an encircled garth of tranquil enclosure. Thomas Gray was part of the reason I went there this summer; he was on my mind for work-related reasons (he wrote Norse Odes, thus edging himself into my subject area). At the time he visited Denton's grassy graveyard he had already written what is now perhaps the most famous poem about a churchyard in the English language, and it's hard not to think of him, and it, there:

Beneath those rugged elms, that yew-tree's shade,
Where heaves the turf in many a mould'ring heap,
Each in his narrow cell for ever laid,
The rude forefathers of the hamlet sleep.

The breezy call of incense-breathing Morn,
The swallow twitt'ring from the straw-built shed,
The cock's shrill clarion, or the echoing horn,
No more shall rouse them from their lowly bed.

For them no more the blazing hearth shall burn,
Or busy housewife ply her evening care:
No children run to lisp their sire's return,
Or climb his knees the envied kiss to share.

Oft did the harvest to their sickle yield,
Their furrow oft the stubborn glebe has broke;
How jocund did they drive their team afield!
How bow'd the woods beneath their sturdy stroke!

Let not Ambition mock their useful toil,
Their homely joys, and destiny obscure;
Nor Grandeur hear with a disdainful smile
The short and simple annals of the poor.

The boast of heraldry, the pomp of pow'r,
And all that beauty, all that wealth e'er gave,
Awaits alike th' inevitable hour.
The paths of glory lead but to the grave. 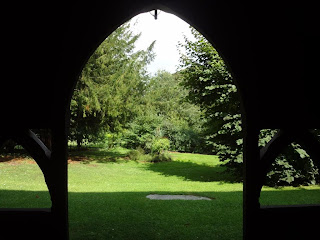 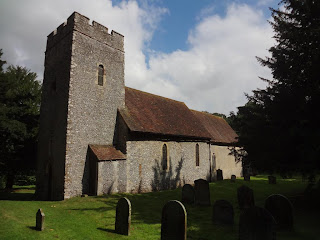 Nor you, ye Proud, impute to these the fault
If Memory o'er their tomb no trophies raise,
Where through the long-drawn aisle and fretted vault
The pealing anthem swells the note of praise.

Can storied urn or animated bust
Back to its mansion call the fleeting breath?
Can Honour's voice provoke the silent dust,
Or Flattery soothe the dull cold ear of Death?

Perhaps in this neglected spot is laid
Some heart once pregnant with celestial fire;
Hands, that the rod of empire might have sway'd,
Or waked to ecstasy the living lyre:

But Knowledge to their eyes her ample page,
Rich with the spoils of time, did ne'er unroll;
Chill Penury repress'd their noble rage,
And froze the genial current of the soul.

Full many a gem of purest ray serene
The dark unfathom'd caves of ocean bear:
Full many a flower is born to blush unseen,
And waste its sweetness on the desert air.

Some village-Hampden, that with dauntless breast
The little tyrant of his fields withstood,
Some mute inglorious Milton here may rest,
Some Cromwell, guiltless of his country's blood.

Th' applause of list'ning senates to command,
The threats of pain and ruin to despise,
To scatter plenty o'er a smiling land,
And read their history in a nation's eyes,

Their lot forbad: nor circumscrib'd alone
Their growing virtues, but their crimes confined;
Forbad to wade through slaughter to a throne,
And shut the gates of mercy on mankind,

The struggling pangs of conscious truth to hide,
To quench the blushes of ingenuous shame,
Or heap the shrine of Luxury and Pride
With incense kindled at the Muse's flame.

Far from the madding crowd's ignoble strife,
Their sober wishes never learn'd to stray;
Along the cool sequester'd vale of life
They kept the noiseless tenour of their way. 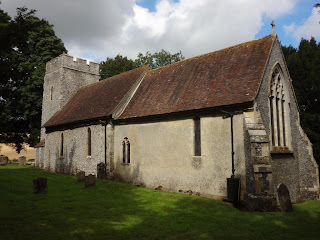 Inside, the church is small and plain and rather dark. There's little sign of its grand next-door neighbour, hardly even a monument; the families who came and went in Denton Court didn't leave much trace behind. 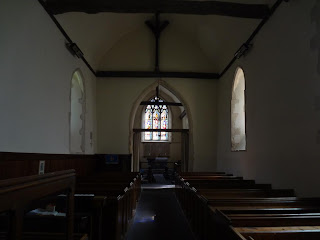 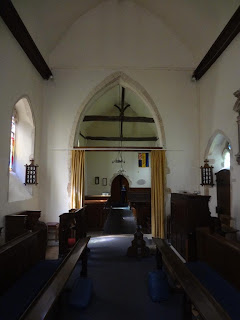 There's one bit of medieval glass, almost unrecognisable as a human face: 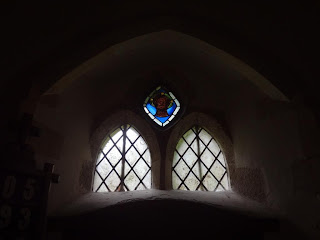 It was probably a head of Christ, but all that remains of its beauty (if it ever had any) is the mix of soft colours: green and gold, blue and white. 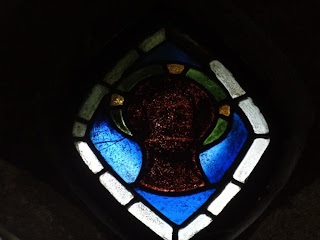 The most prominent monument, above the pulpit, is indecipherable: 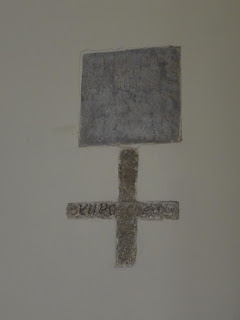 The porch bears crosses carved, so legend says, by crusaders on their way to the wars: 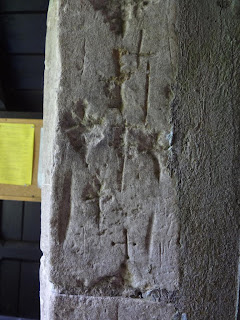 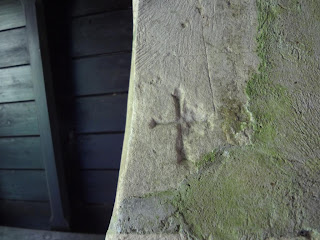 But war of any kind seems very distant; far from the madding crowd's ignoble strife... 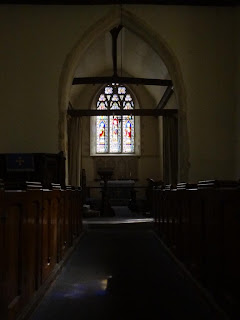 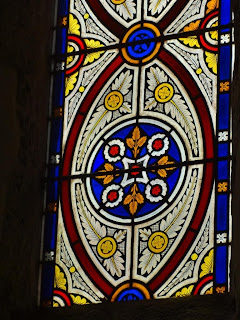 Can storied urn or animated bust
Back to its mansion call the fleeting breath?
Can Honour's voice provoke the silent dust,
Or Flattery soothe the dull cold ear of Death?

Perhaps not; but nonetheless these two epitaphs were my favourite things in the church: 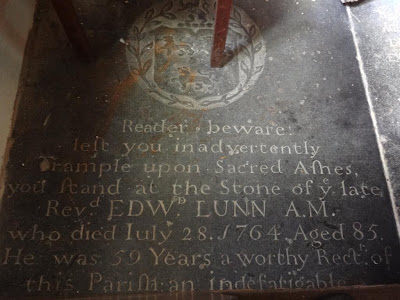 'Reader, beware, lest you inadvertently trample upon sacred ashes!'  I tried not to, Mr Lunn, but it was difficult.  In any case there was a chair on top of the stone, and the lower half was covered by a pew, so we will never know in what way the rector was particularly indefatigable.  But his immediate successor was Gray's friend, William Robinson. 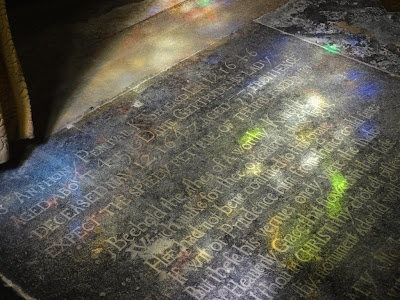 Beehold the ashes of a worthy Knight,
Which make for thee, O Reader, a glasse light.
Hee had not bene confined to this grave
If wit or Prudence him from thence could save.
But these his vertues only were the shade
Of Heavenly Grace that flowers in their fade.
And thou in Christ thy choicest giftes must raise
To have thy monument adorned with praise.
Posted by Clerk of Oxford at 10:29 pm

:) Life is a bit not-great for me right now, and I suddenly thought of coming to your blog for... well,I knew well that whatever I found here would be good! And so it all is. Thank you very much.
I especially liked the indefatigable Rector. :) But all of it is good.

:) You're very welcome, and I'm so glad it was a help. I'm sorry life isn't good at the moment! When I was writing this post I actually had a whole section I cut out about the comfort of thinking about peaceful places like Denton when life is not going well - inside of the extracts from Thomas Gray I was going to post this from Wordsworth:

But oft, in lonely rooms, and 'mid the din
Of towns and cities, I have owed to them
In hours of weariness, sensations sweet,
Felt in the blood, and felt along the heart;
And passing even into my purer mind,
With tranquil restoration: feelings too
Of unremembered pleasure: such, perhaps,
As have no slight or trivial influence
On that best portion of a good man's life,
His little, nameless, unremembered, acts
Of kindness and of love. Nor less, I trust,
To them I may have owed another gift,
Of aspect more sublime; that blessed mood,
In which the burthen of the mystery,
In which the heavy and the weary weight
Of all this unintelligible world,
Is lightened:—that serene and blessed mood,
In which the affections gently lead us on,—
Until, the breath of this corporeal frame
And even the motion of our human blood
Almost suspended, we are laid asleep
In body, and become a living soul:
While with an eye made quiet by the power
Of harmony, and the deep power of joy,
We see into the life of things.

That's how I feel about places like Denton, and I hope it gives you that comfort too :)

Thank you. It was exactly this, the sense of peace conveyed, and the thought of 'little, nameless, unremembered acts' which I found so lovely (and hence, yes, a comfort).