I've just written another blog post for the BBC History website, History Extra, about the various fates which befell the bodies of Anglo-Saxon kings after death - you can read it here. This was inspired, of course, by the recent reburial of Richard III (well, by that and slogging through William of Malmesbury's De Antiquitate Glastoniensis Ecclesiae, from which the first story comes). If you're interested in that particular subject, I wrote about the similarities between Richard's reburial and medieval translation narratives here.

Numerous aspects of this topic interest me, beyond the rather gruesome facts of the burials themselves. The details can be illuminating: William of Malmesbury's story probably suggests an incipient cult, never brought to fruition, of King Edgar at Glastonbury, while the treatment of Svein and Æthelred's bodies amid the exigencies of wartime is a reminder of just how dangerous England was in 1014-16. Going further back, I find it fascinating - living now in an age when London dominates all - to think about the decentralised world of Anglo-Saxon kingdoms, the days when Bedford or Malmesbury or little Repton could be places of royal significance. Winchester was a royal capital long before Westminster had an abbey, much less a parliament - when it was just a thorn-covered island in the Thames. St Augustine's Abbey in Canterbury was once a royal mausoleum, where for nearly a millennium the first English Christian king lay in an honoured tomb; the abbey is now in ruins, the tomb vanished. And this is only Anglo-Saxon England, well-documented and relatively modern history, which feels like yesterday compared to landscapes like Stonehenge or Wayland's Smithy, the eald enta geweorc which were ancient to the Anglo-Saxons themselves. It's a tantalising glimpse at a lost, enchanted landscape, a reminder that however inevitable and natural the current state of things might seem to us, the geography of power changes - and will change again, some day.

This is a romantic way of thinking about history but it can be a salutary one, a poetic strain more starkly challenging than the most sober facts. What really interests me about the varying fates of kings' bodies is the philosophical lesson which any medieval historian would have been ready to draw from such stories: earthly power is fleeting, and all empires fall. (Henry of Huntingdon is particularly good on this subject.) This is, in one way, too obvious to be worth saying, but at the same time - especially since we in the UK are in the middle of an election campaign - it can't be said often enough. These days it's possible to eavesdrop on the most powerful in our society, people who consider themselves opinion-formers, as they talk to each other within the screeching and self-regarding echo chamber of Twitter; there, every moment's crisis is the most important thing which has ever happened, and they don't even know how little they know about the lives of the people they think they govern. The perspective of five years seems beyond most of them, let alone five hundred.

A little more philosophy would do us all a lot of good. Medieval literature has many profound things to say about power and its limitations, which speak to a world in which we are not good at conceptualising the parameters of our own importance. Ubi sunt qui ante nos fuerunt?, the question asked by so many medieval poems, is a cliche only because it is so important and so self-evidently true.

Tell me, where is Solomon, at one time a king rich?
Or Samson in his strength, to whom no man was liche? [equal]

Or the fair man, Absalom, so beautiful in chere? [appearance]
Or the duke, Jonathan, a well-beloved fere? [friend]

What has become of Caesar, who was lord of all?
Or the rich man clothed in purple and in pall?

Tell me where is Tullius, in eloquence so sweet?
Or Aristotle the philosopher with his wit so great?

Where are these worthies who were here before?
Both kings and bishops, their power is all loren. [lost]

All these great princes with their power so high
Are vanished away in the twinkling of an eye.

The English translation of Boethius' Consolation of Philosophy written for (or by) Alfred the Great famously asks, replacing Boethius' Fabricius with a native hero: 'Where now are the bones of Wayland, and who knows where they now may be?' We can ask the same question about the bones of Alfred, as Alfred himself might have expected us to do; but it's a philosophical, not an archaeological, question - an invitation to meditate, not to dig up Hyde Abbey. 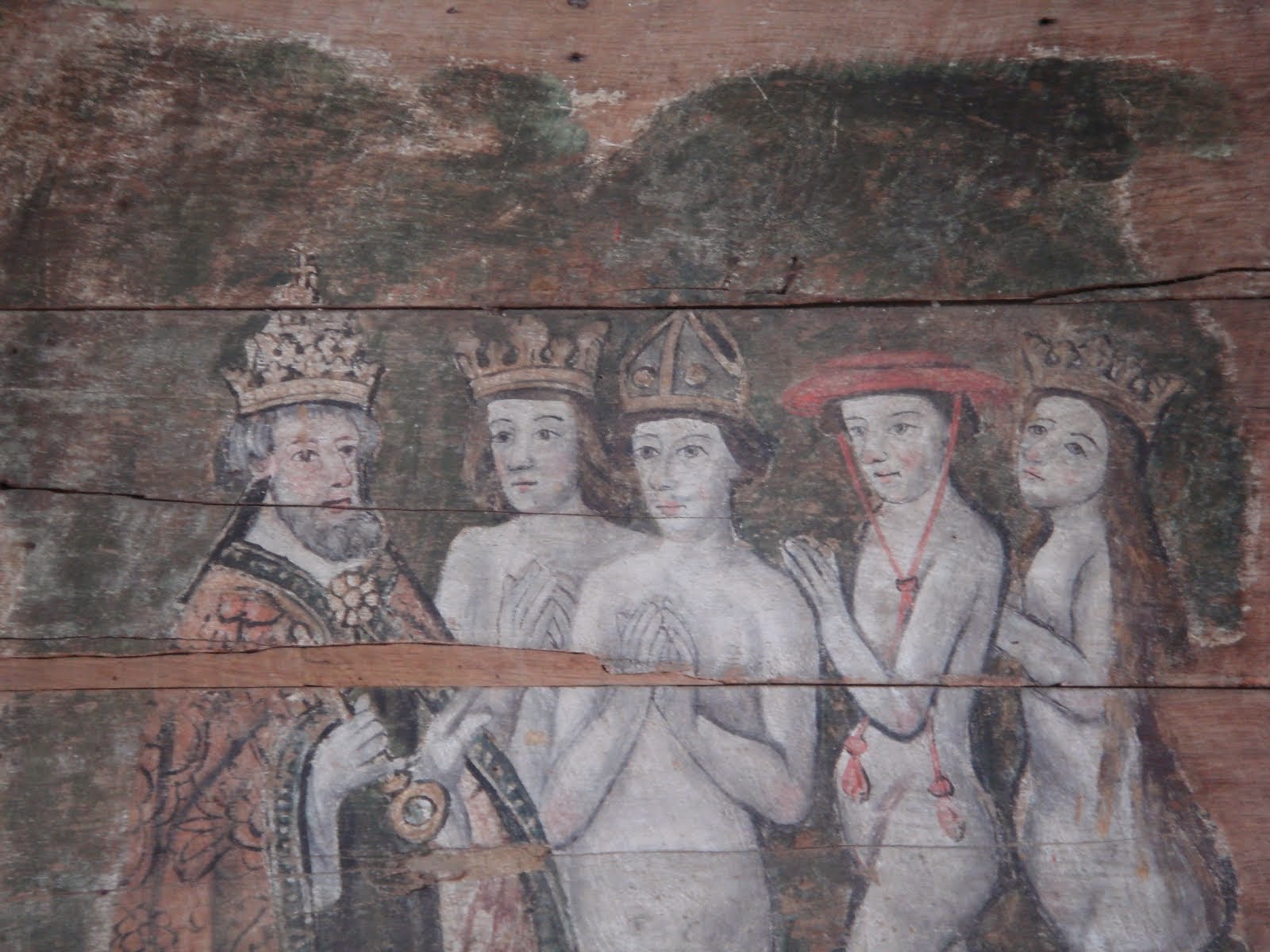 It's not hard to imagine modern equivalents for those medieval Doomsday scenes where the naked dead, facing judgement, bear some token of their power in life - like the above from Wenhaston. Replace those little hats with whatever signs would be most appropriate for modern power: Prime Ministers, bankers, advertisers, celebrities, whatever you like - it all comes to the same thing in the end. This medieval focus on death and mortality, which to a modern audience may seem morbid, can in fact be radically liberating. It's both humbling and empowering: your own actions may be nothing, your age a blink of an eye, in the incomprehensibly long history of the world, but freedom from the constraints of your own time liberates you to ask big questions, to act in whatever way you think will do most good in the little space allotted to you. It's those who have contempt for the world (in the old sense of contemptus mundi) who are most free to improve it, being least in thrall to its chains of success, wealth and power.

For thou knowest not today that thou shalt live tomorrow;
Therefore do thou ever well, and then shalt thou not sorrow.

A memento mori is not morbid if it encourages you to value what is lasting over what does not endure.

This lesson is especially poignant when knowledge of it is attributed to kings themselves, and I don't think it's a coincidence that two of the best-known stories about Anglo-Saxon kings relate to this very moral: King Alfred, the thoughtful reader of Boethius, being reminded at his lowest ebb that to a woman baking cakes a king is no better than any other man; and Cnut, the great Viking who could rule the seas but could not control the tide. The idea is perhaps most powerfully expressed in the completely unhistorical but nonetheless haunting legends surrounding the idea that Harold Godwineson might have survived the Battle of Hastings, about which I wrote here. Those stories, inspired by a terrible injustice, are wish-fulfillment fantasies about how things could or should have been, a lament for a lost king and a lost country. But they don't describe Harold returning in battle to reclaim his conquered kingdom; the wish being explored is not violent or vengeful. Harold becomes a hermit, and his loss of earthly power gives him unique spiritual insight - a humiliation better than any glory and a wisdom greater than any crown.

Thanks for this wonderful post. I especially like "It's those who have contempt for the world (in the old sense of contemptus mundi) who are most free to improve it, being least in thrall to its chains of success, wealth and power."

Clerk of Oxford; Thank you!

So fascinating. Do you think the poem influenced Thomas More's elegy on the death of Elizabeth of York? The tone is similar.

I don't know about this poem specifically, but More's elegy is very much in the same tradition!

You have a way of drawing the reader into the past and making it rear in the present. Thank you

I wonder how 'Cur mundus militat' through all the history of its texts, translations, and manuscripts sits with High and Late Medieval attention to sacred relics?

And I wonder, too, how characteristic or unusual the Wenhaston iconology of St. Peter welcoming the happy dead is? - my first thought was, 'the Harrowing of hell? - but that does not look like Our Lord!'