'Sending forth his soul into the hands of the Creator, he slept in peace' 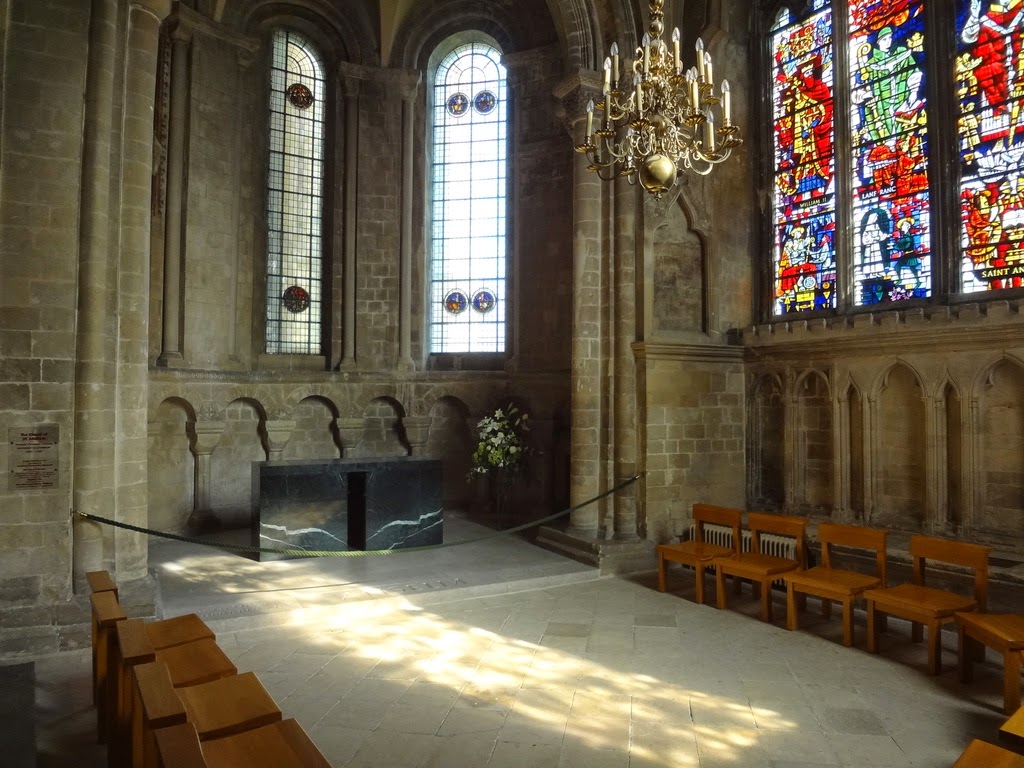 This is an eyewitness account of the death of St Anselm on 21 April 1109, as described by the Canterbury monk Eadmer, Anselm's faithful follower in life, who was with him to the end (from Vita Sancti Anselmi, trans. R. W. Southern (Oxford, 1972), pp. 141-3):

Palm Sunday dawned and we were sitting beside him as usual. One of us therefore said to him: 'My lord and father, we cannot help knowing that you are going to leave the world to be at the Easter court of your Lord.'

He replied: 'And indeed if his will is set on this, I shall gladly obey his will. However, if he would prefer me to remain among you, at least until I can settle a question about the origin of the soul, which I am turning over in my mind, I should welcome this with gratitude, for I do not know whether anyone will solve it when I am dead. Truly I think I might recover if I could eat something, for I feel no pain in any part of my body, except that I am altogether enfeebled by the weakness of my stomach which refuses food.'

Then, on the Tuesday evening, when he could no longer speak words which could be understood, he was asked by Ralph, bishop of Rochester, to give his absolution and blessing to those of us who were present and to his other sons, and to the king and queen and their children, and to the people of the land who lived under his authority subject to God. He raised his right hand as if nothing was wrong with him, and, after making the sign of the holy Cross, he sat with his head bent down.

Now, when the community of the brethren was singing lauds in the morning in the main church, one of us who were with him took the copy of the Gospels and read to him the account of the Passion which was appointed to be read at Mass on that day. And when he came to the words of the Lord 'Ye are they which have continued with me in my temptations; and I appoint you a kingdom, as my Father hath appointed unto me, that ye may eat and drink at my table in my kingdom,' he began to draw his breath more slowly than usual. We felt therefore that he was now on the point of death, and he was lifted from his bed onto sackcloth and ashes. The whole congregation of his sons gathered round him and, sending forth his soul into the hands of the Creator, he slept in peace. And so he passed away as dawn was breaking on the Wednesday before the institution of the Lord's Supper, on 21 April in the year of our Lord's Incarnation 1109, which was the sixteenth year of his pontificate, and the seventy-sixth of his life.

Eadmer believed that Anselm's death had been miraculously foretold by St Dunstan:

There was a certain monk of the church of Canterbury, Elias by name, an upright man endowed with a simple innocency of life. To him there appeared a vision one night almost three months before the death of Father Anselm. He thought that he was standing alone in the church praying as God gave him utterance. While he was thus occupied he looked up, and behold Father Anselm was prostrate in prayer before the tomb of St Dunstan. He saw that, while Anselm was praying, the lid of the tomb began to move so that it was gradually withdrawn from its place. Anselm was disturbed by this movement and, rising from his prayers, he saw St Dunstan raising himself gradually in his tomb as if to sit up; but he was hindered by the lid of the tomb which had not yet withdrawn sufficiently to leave him room for sitting. Anselm tried with all his might to move the weight, but without success. He therefore beckoned to the aforesaid brother, who stood at a distance, to approach and to help him to achieve what he was unable to effect alone. He approached and together they succeeded in doing what one had been unable to do.

The obstacle being thus removed, the most holy Father raised himself and sitting up he turned to Anselm and said 'My dearest friend; know that I have heard your prayers.' And stretching out his right hand he offered him a gold ring, saying 'Take this as a sign that I have spoken the truth to you.' But when Anselm put out his hand to receive the ring, St Dunstan drew back his hand and said, 'You will not have the ring this time, but I shall keep it and on the fourth day before Easter you will receive it from the hand of the Lord.'

The brother described this vision to me next day in conversation, but I — being more eager that my Father and lord should live than that he should die — tried at that time to interpret it in a way different from what later fell out. But when it came to the day, it was then clear what the vision had foretold, for as dawn broke on that day the Father was taken from this life and received the glory of a heavenly reward, as another vision which I shall describe made clear.

At that same hour when he was to take leave of this life, a certain monk of the neighbouring abbey of the blessed Apostles Peter and Paul and St Augustine, who was anxious about the Father's death, was suddenly overcome with sleep as often happens when we are weary with anxiety. As he slept it seemed to him that he stood near to Anselm in the room where he lay dying, and the room was filled with a host of people most wonderfully and beautifully arrayed in white apparel and seeming to await the arrival of someone who was swiftly to come to them. The company was under the authority and direction of a bishop of outstanding splendour dressed in full pontifical robes, and all awaited his signal. He appeared to go in and out, exhorting those who were outside to watch without fainting. And when Anselm was on the point of death, he went out in haste and said, 'Behold he whom you await is at hand. Receive him, and lead him where the Lord has ordained, with the voice of joy and praise.' While this was taking place, the brother was roused from sleep and knew that father Anselm had exchanged this present for eternal life. It was perfectly clear from his appearance and bearing that the bishop presiding over the others was St Dunstan, who with full honour and glory gave Anselm the ring, which had been promised as we have described.