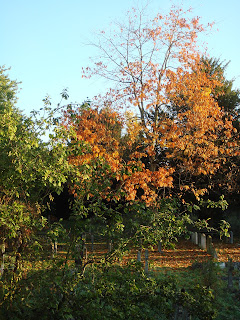 On autumn and the changing of the year, from Sir Gawain and the Green Knight (ll.516-533):


Gawain is difficult to translate without losing the poetry, but here's my attempt:

After the season of summer, with its soft winds,
When Zephyrus breathes on seeds and herbs,
- A great good is the plant that grows thus –
When the drenching dew drops from the leaves
To await the bright blush of the burning sun;
But then hies harvest, and quickly hardens it,
And warns it to wax ripe against the winter’s coming;
He drives in drought and rises the dust
Flying up high from the face of the earth;
Wrathful winds from the sky wrestle with the sun
The leaves leap from the linden and alight on the ground,
And all the grass goes grey that was green before;
Then all ripens and rots that formerly rose up;
And thus runs the year in yesterdays many,
And winter wakes again, as the world directs,
in truth,
Until the Michaelmas moon was come
With the first pledge of winter.

According to the OED, the 'Michaelmas moon' is another name for the harvest moon, the first full moon after Michaelmas Day.
Posted by Clerk of Oxford at 11:09 am