9: He turned people into leeks.

No, not really. This is one of Edward's miracles of healing, from the Old Norse saga about his life, Játvarðar saga:

"It happened another time that when king Edward was sitting on his throne, a crippled man came before the door of his lodging and said that Peter the Apostle had sent him thither, and that Peter had told him that the king himself should bear him to Peter's church, and then he would be cured. When this was told to king Edward he went to him, and heard these words himself from the man's mouth. And, showing his faith and humility, he took the man up in his arms and bore him to Peter's church in London, and set him down there. Then the crippled man was made whole and upright as a leek."

Upright as a leek in Old Norse = réttr sem laukr. A leek to an Old Norse writer was a rather more dignified object than we might imagine today: a noble, straight-limbed, smooth kind of thing, fresh and young and green (compare this poem from the Edda). Apparently there is still a Scottish proverb "as clean as a leek", meaning, according to the OED, "perfectly, completely, entirely". That's the same sort of idea as we've got here.

Leeks aside, this is a lovely story. Edward the Confessor was the first king of England of whom it was said that he could cure illness by his touch, in particular the sickness later known as 'the king's evil'. Shakespeare has him doing this off-stage in Macbeth, and you may know that Tolkien borrowed this medieval legend for Aragorn in The Return of the King, where it's said in the ancient lore of Gondor that "the hands of the king are the hands of the healer". Aragorn's healing touch reveals his royal identity, and takes us from leeks to Tolkien in two easy steps.

(I've just noticed that the OED entry on 'the king's evil' cites one manuscript from 1398: "the smel of leke..heleth the kinges yuel and the dropsie". Well, there you go then.)

Let's give the last word on Edward to Shakespeare:

The mere despair of surgery, he cures,
Hanging a golden stamp about their necks,
Put on with holy prayers: and ’tis spoken,
To the succeeding royalty he leaves
The healing benediction. With this strange virtue,
He hath a heavenly gift of prophecy,
And sundry blessings hang about his throne,
That speak him full of grace. 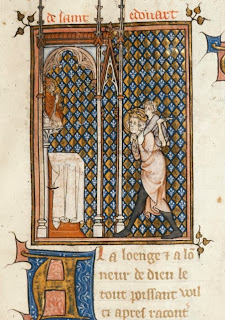