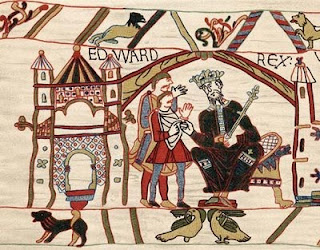 Edward in the Bayeux Tapestry, because the Norman Conquest was all his fault.

4. Edward is often called "the last Anglo-Saxon king",* but I don't like that designation (this may be more 'a thing you didn't know about me' than about Edward). Yes, he was the son of an Anglo-Saxon king, but by blood and inclination he was Anglo-Norman: his mother was Norman, and he spent 25 years in exile in Normandy before becoming king of England. When he returned to England in 1041, he barely knew the place; he hadn't seen it since he was a teenager, and I'd love to know what kind of English he spoke at that point - future patron saint of the English! He brought Norman priests and noblemen with him, and didn't get on very well with the Englishmen who had served Cnut (more of that tomorrow).

So it might be more accurate to call Edward's valiant elder half-brother, Edmund Ironside, the last Anglo-Saxon king. Edmund died in 1016, having given half his kingdom to Cnut; then there were three Danish kings of England, Anglo-Norman Edward, and, in 1066, Norman William. Not a Saxon among them. The eleventh century was awfully complicated - but so much fun.


*The other two kings of 1066 notwithstanding: poor uncrowned Edgar Atheling doesn't count, and Harold Godwinsson certainly doesn't.
Posted by Clerk of Oxford at 9:58 pm

Email ThisBlogThis!Share to TwitterShare to FacebookShare to Pinterest
Labels: Anglo-Saxons, Edward the Confessor, Medieval, The Eleventh Century, Those Crazy Vikings