Or maybe you did, what do I know. 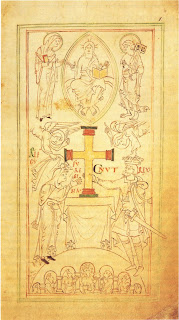 5. After the death of Edward's father Ethelred, his mother married Cnut, king of Denmark, the man who had replaced Ethelred on the English throne. This would have made for some awkward family Christmasses, except that there isn’t any evidence that Edward ever met his stepfather.

When Cnut was dead and there was some confusion over the succession, Queen Emma is said to have supported the claim of Magnus, king of Norway, over that of her son. She was popularly accused of all kinds of scheming against, well, anyone who wasn't Harthacnut, the son she had with Cnut. After he became king, Edward, in a supremely unsaintly act, had his mother's property and lands seized, supposedly because of her support for Magnus. It was a political mess but also, I think, rather a sad situation all round.

(That's Cnut and Emma up there, demonstrating their piety in front of an altar in a manuscript from the New Minster at Winchester. As ruler of England, Cnut, always astute, adopted a model of Christian kingship which went down rather well among his new subjects, becoming a patron of the Church and a devotee of English saints. His sudden love for all things English extended to everything except his stepsons, who spent the twenty-five years of his reign in exile.)
Posted by Clerk of Oxford at 12:12 pm