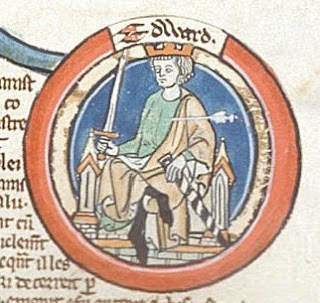 3. Edward's uncle, also called Edward, was a saint too. Edward-the-uncle was murdered at the age of 13 by his stepmother (the grandmother of Edward the Confessor), who wanted her own son to be king. Her son, Ethelred the Unready, was too young to have had a hand in the murder, but it haunted the early years of his reign, and some people believed that his later deposition at the hands of the Danes was God's punishment for the murder of Edward.

The uncle is thus known as Edward the Martyr, and this is why the younger Edward is universally known as Edward the Confessor, to distinguish him from his namesake. This has confused generations of schoolchildren, among them future BBC announcers, judging by their attempts to cover the Pope's visit to Westminster Abbey a few weeks ago. "Edward was known as the Confessor because he was faithful to God". Well, yes... and no. Technically, lots of saints are confessors; it doesn't convey anything more about Edward than that he did not die a martyr, but lived a holy life. Unlike, it must be said, his dissolute teenage uncle, who never did anything more saintly than be murdered...

Bonus fact you may, actually, have known: not only was Edward the Confessor nephew to a saint, he was also the great-uncle of St Margaret of Scotland.
Posted by Clerk of Oxford at 11:55 am