Some light in a dark day

Over the summer I visited the church of St Nicholas in Ash, east Kent - a large church in what is now a little village. It's a medieval church with numerous beauties, scattered around a roomy building which feels almost like a series of stone barns which have been loosely joined together; but having duly admired the medieval brasses, stone effigies, and alabaster monuments, which did delight my academic's heart, my sentimental Victorianist's eye was caught by this window in the south transept.
(click to enlarge for the full effect) 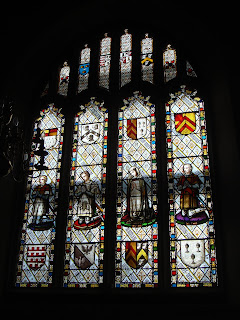 In a grey church, this was a ray of rich colour. It was rather hidden away behind something (the organ? I can't quite remember), and I couldn't manage to find out who made it or to whom it was a memorial. 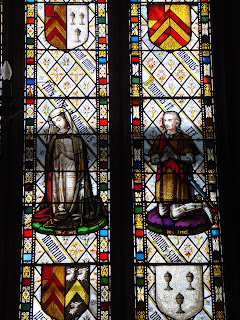 It doesn't matter; I rather fell in love with it. This is a shocking confession, but the splendour of Victorian-revival-fake-medievalism is just as dear to me as real medieval art. 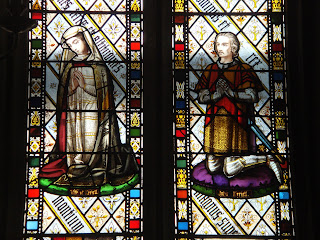 I think the names below these figures say "John Keriell" and "Wife of Keriell" (!) but who they might have been, I don't know. Doubtless the heraldry would give it away to a person learned in such matters. I was just touched by the beauty of the colour and the figures, especially this young man who appears to have an elephant as his crest. He looks every inch the Charlotte Yonge hero - a very gentil parfait knight. 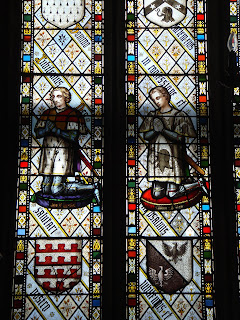