Oswald of Northumbria; Bamburgh; Being Born in a Barn 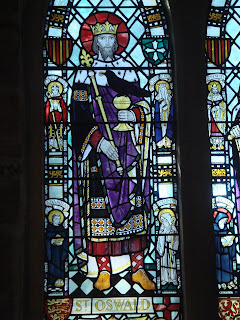 Today is the feast-day of Oswald, king of Northumbria in the seventh century, and one of England's greatest kings; he was something of a favourite hero to the Venerable Bede, and so we know rather a lot about him. An account of his life is available in the usual places. He was a popular saint throughout the Anglo-Saxon period, something of a native Emperor Constantine, promoting Christianity not only by the sword but by the preaching of good bishops: a Christian convert himself, he brought St Aidan from Ireland to spread the Christian faith to the Northumbria people.

(My favourite detail of Bede's story about their work together is that Oswald used to act as interpreter when Aidan preached, translating from Irish to English; Oswald himself had learned Irish as a young man in exile.)

His capital was at Bamburgh, which today has a castle which looks like this: 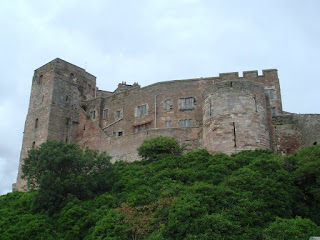 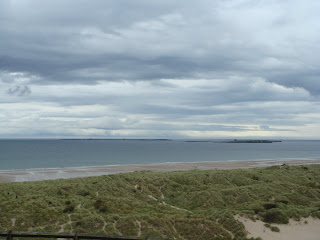 (Those are St Cuthbert's Farne Islands out to sea.)

At Bamburgh his incorrupt right arm was once preserved as a relic; Bede explains how this came about:

[I]t is reported, that when he was once sitting at dinner, on the holy day of Easter, with the aforesaid bishop [Aidan], and a silver dish full of dainties before him, and they were just ready to bless the bread, the servant, whom he had appointed to relieve the poor, came in on a sudden, and told the king that a great multitude of needy persons from all parts were sitting in the streets begging some alms of the king; he immediately ordered the meat set before him to be carried to the poor, and the dish to be cut in pieces and divided among them. At which sight, the bishop who sat by him, much taken with such an act of piety, laid hold of his right hand, and said, "May this hand never perish." Which fell out according to his prayer, for his arm and hand, being cut off from his body, when he was slain in battle, remain entire and uncorrupted to this day, and are kept in a silver case, as revered relics, in St. Peter's church in the royal city.

Oswald was killed on the 5th August, 642, in battle against the pagan king Penda of Mercia. Bede claims that it was proverbial that he died in prayer: the proverb was "Lord, have mercy on their souls, said Oswald, as he fell to the ground." The site where his blood fell was considered to be holy, and Bede describes how "many took up the very dust of the place where his body fell, and putting it into water, did much good with it to their friends who were sick. This custom came so much into use, that the earth being carried away by degrees, there remained a hole as deep as the height of a man." Many people were miraculously cured by this holy ground.

Oswald's relics were removed first to Bardney in Lincolnshire and then to Gloucester. Bede tells of the translation to Bardney, but it apparently entered local folklore; excuse me while I repost myself, from last October:

Do you come from Bardney?

Apparently this is a well-known saying in Lincolnshire, used to tell someone they've left a door open (compare, I suppose, 'Were you born in a barn?'). The supposed origin of the phrase is rather strange:

Bardney is a village a few miles east of Lincoln. It was the site of an Anglo-Saxon abbey, and in 679 Osthryth, queen of Mercia, wanted to transfer the bones of her uncle St Oswald to Bardney. The monks, showing a surprising degree of incipient regionalism, refused to accept the relics on the grounds that Oswald, when king of Northumbria, had conquered Lindsey (the Anglo-Saxon kingdom comprising part of modern-day Lincolnshire).

The monks shut the abbey gates against St Oswald's bones and refused to allow the coffin in, but during the night a pillar of light shone out above the body (a common motif; a similar pillar helped reveal the location of the body of Edward the Martyr). The monks, recognising a miracle when they saw one, realised that Oswald really was a saint and they had been wrong to leave him outside, so after that they always left their gates wide open (some say, removed them altogether). Hence the saying.
Posted by Clerk of Oxford at 5:30 pm