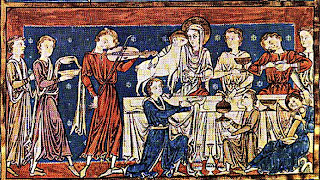 If you were ever curious to know how medieval clergy sustained themselves, this is a contemporary description of the food allowance for the twelve canons of the church of Waltham, Essex, when it was refounded in the middle of the eleventh century:

"Each canon's portion was divided up each week as follows: from Saturday to Saturday, each day two loaves of the purest white bread, a third loaf not so white, these three loaves when divided carefully being certainly sufficient for six persons at one meal. Six bowls of ale were quite sufficient for ten persons at one meal. Every ordinary day there were six dishes of food, each one of a different kind, but on feast days of primary importance each man had three pittances of fod, two of feast days of secondary importance, and one on feast days of third rank of importance.

There were the following additional allowances for each of the canons: from Michaelmas to the beginning of Lent a choice of twelve blackbirds, two plovers, two partridges, or one pheasant. For the rest of the year they could have either geese or chickens. At the main festivals of the year, namely Christmas, Easter, Pentecost, and the two feast days of the Holy Cross [the patronal feast of the house], each canon was allowed wine and mead."

The Waltham Chronicle: an account of the discovery of our holy cross at Montacute and its conveyance to Waltham, ed. and trans. Leslie Watkiss and Marjorie Chibnall (Oxford, 1994), p.31.


This gives one a new understanding of the term 'feast day'! Out of this allowance the canons could give alms, and some of them probably supported families; marriage of canons was a controversial subject at this period, not technically permitted but widely tolerated. Even so, this amount of food has been described by one historian of the religious orders as "gargantuan"...
Posted by Clerk of Oxford at 2:53 pm