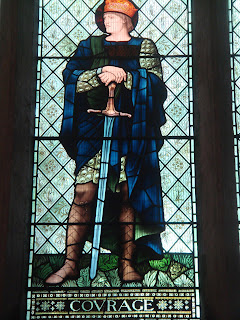 I learned today that Edmund the Martyr, the king of East Anglia killed by the Vikings in 870, supposedly had a brother named Eadwald, who became a hermit at Cerne in Dorset. I think the Anglo-Norman monk-chronicler William of Malmesbury, writing 250 years later, may be the only evidence of his existence, and this is how he reflects on Eadwald's life:

He was tired, so men said, of the delights of the world, in which misfortune had overtaken both him and his brother. For it often happens that the noble spirit is warned by the disasters of life to turn its attention more towards God, who knows not how to be disappointed or to disappoint. No doubt the highest virtue is to want the good for its own sake, but the second level of virtue is to be able to be compelled to do it, so that, in my opinion, people think as highly of Paul, who was driven to the good by the lashes of the whip, as of Peter, who willingly and without delay ran towards his master when he called him. 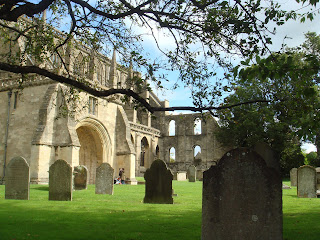 William's own abbey of Malmesbury was dedicated to St Peter and St Paul, so the two saints' contrasting qualities may have been something he had considered before. Malmesbury - which at one time contained the second-largest library in Europe - is in ruins now, of course: 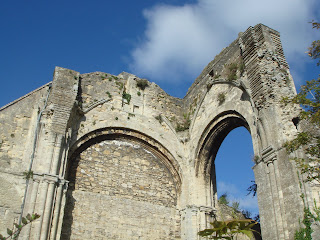 But the abbey church was converted into the parish church of the town, and in the south porch survive these stunning Norman carvings of the Apostles: 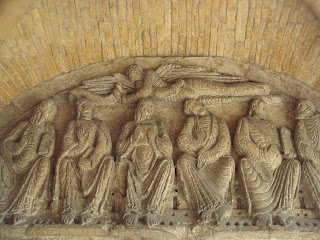 This depicts Pentecost, and the Holy Spirit descending on them. Here's St Peter, always the most recognisable: 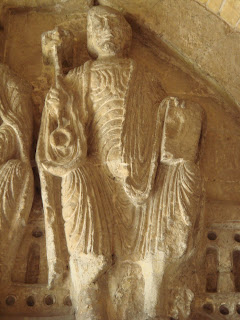 (NB: the Burne-Jones window at the top, also from Malmesbury, wasn't there then either...)

William, a prolific historian, was also a generous-minded one. He sought out all kinds of information for his great histories of the English kings and bishops, from chronicles and charters to the evidence of his own eyes and the words of trustworthy men; but he was scruplously fair, and never liked to tell unsubstantiated stories, or to repeat gossip. He tells one story of three priests who divined, by opening the Gospel-book at random, what their futures would be. Two were destined for success - one to be a bishop, the other an abbot - but the third man's future was a harsh one. But William does not disclose what the third man read; instead he says:

Although I once heard it, I have been happy to forget it, since it is no part of a free-spirited man to jeer at the troubles of others.

How many historians would say the same!
Posted by Clerk of Oxford at 10:32 am