Senators in the Starry Regions 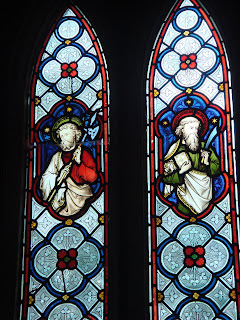 This is a quotation I came across today in a life of the Anglo-Saxon royal nun, St Edith of Wilton (d.984). Her hagiographer, Goscelin, writing in c.1080, had his information about Edith straight from the nuns of Wilton, and he records traditions which were preserved in the abbey regarding Edith's personal devotions (which I might post about tomorrow). This is the wording he uses to say that she was particularly devoted to the Apostles:

"She chose for herself as her plenipotentiary intercessors those senators in the starry regions, those members of the heavenly Upper House, the apostles, as being the fellow country-men and women and friends of God, and with the confidence and importunity of the Canaanite woman she harassed the Lord through them." 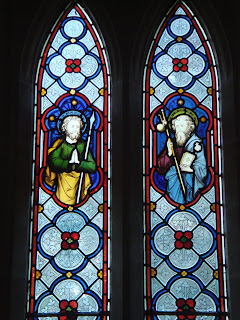 I love that - "the heavenly Upper House!" I don't have access to the original Latin, so I don't know if a little of this is the translator's (very admirable) whimsy, but it is very much in Goscelin's style. It seems appropriate for today, the feast of St Matthew the Apostle. 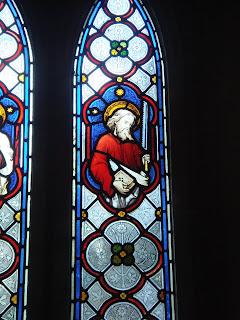 I can't resist mentioning that I've written before about Goscelin's love for Wilton and my belief that his work may have influenced C. S. Lewis. His lives of saints are extremely interesting, and it's partly thanks to him that we have information about Anglo-Saxon saints, like Edith, who would otherwise be difficult to trace. 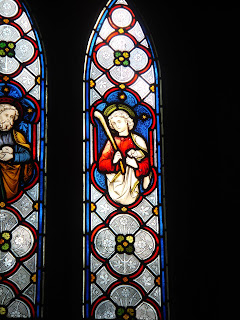 These pictures are from the church of Kingsdown, near Faversham in Kent. They're Victorian, but the reason they look so medieval is because the church - which is beautiful but very remote and which, when I went there a few weeks ago, was inches thick in dust - was designed in its entirety by Edward Welby Pugin (the son of Augustus). In face and hair they deserve comparison with the Anglo-Saxons depicted in the Pugin church at Ramsgate, but they are in fact apostles: from the top, Matthias, Bartholomew, Thomas, James the Great, Simon, and James the Less.

I'm just showing off that I looked up all their attributes ;)
Posted by Clerk of Oxford at 8:54 pm