The Walls of Walsingham 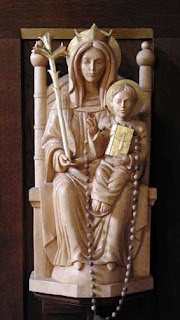 Today is the feast of Our Lady of Walsingham, a modern feast commemorating a medieval site of pilgrimage. In 1061, on the eve of the Norman Conquest, an Anglo-Norman noblewoman called Richeldis had a vision instructing her to build a replica of the Holy House in Nazareth, at Walsingham in Norfolk. She did so, and the place became a popular site of pilgrimage - though I feel it's necessary to mention what Langland says about it:

[A heap of hermits with hooked staffs
Went to Walsingham, and their women with them:
Great lazy louts who were loath to work
Clothed themselves in copes to look different from others
And called themselves hermits so they could do what they liked.]

Not that Walsingham attracted worse pilgrims than anywhere else (think of the pilgrims in the Canterbury Tales!), only that by being a bit closer than Rome or Jerusalem, it may have attracted the lazy as well as the truly devout. Nonetheless, it was the site of an Augustinian priory, which now looks like this: 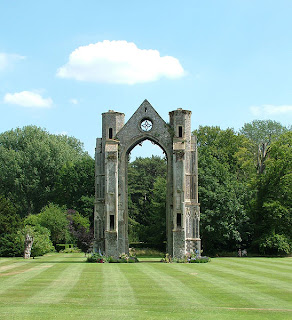 The ruins of the great medieval abbeys after the Reformation must have been a powerful physical reminder of the world which had been so violently ripped apart - as the Anglo-Saxons wondered at Roman ruins and called them the works of giants, so the people of the 16th century must have been deeply affected by the stone shells of what had once been matchless centres of learning and culture. One anonymous poet wrote thus, touchingly, about the ruins of Walsingham:

Then thou Prince of Walsingham
Grant me to frame
Bitter plaintes to rewe they wrong
Bitter wo for my name.

Bitter was it oh to see
The seely sheepe
Murdered by the raveninge wolves
While the sheephards did sleep.

Bitter was it oh to vewe
The sacred vyne
While the gardiners plaied all close
Rooted up by the swine.

Bitter, bitter oh to behould
The grasse to growe
Where the walls of Walsingham
So stately did shewe.

Such were the works of Walsingham
Where she did stand
Such are the wrackes as noe do shewe
Of that holy land.

Levell levell with the ground
The towres doe lye
Which with their golden, gliitering tops
Pearsed once to the sky.

Where weare gates no gates are nowe,
The waies unknowen,
Where the press of peares did pass
While her fame was far blowen.

Oules do scrike where the sweetest himnes
Lately were songe,*
Toades and serpents hold their dennes
Where the palmers did throng.

Sinne is where our Ladie sate,
Heaven turned is to hell,
Sathan sittes where our Lord did swaye,
Walsingham oh farewell.

(I've written about similar ruins at the abbeys of Crowland, Canterbury, and Ramsey. Perhaps one day I'll post about another great tragedy of the Reformation, the destruction of so many medieval monastic libraries...)
Posted by Clerk of Oxford at 10:50 am

By way of comparison, could you find the text of 'Have with you to Walsingham'? Byrd and Bull wrote sets of variations on the theme.

Yes, there seems to have been several variations on the Walsingham ballads - http://www.walsinghamanglicanarchives.org.uk/walsinghamballads.htm has some interesting information.