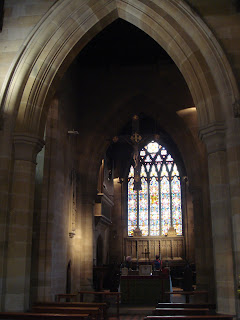 This is a rather upmarket version of 'medieval people in modern stained glass', because instead of the usual efforts of anonymous Victorian artists, we are concerned today with the work of Augustus Welby Pugin. Pugin, a Catholic convert and one of the leading figures of the Gothic Revival in England - most famously, he designed the Palace of Westminster - settled in Ramsgate, on the coast of Kent, in 1844. He designed a church there, right next door to the house he had built for himself (the house has recently been restored, beautifully, and you can stay there). And I went to visit it and took some photos.

Every detail of the church, which was served by a community of Benedictine monks, was planned with meticulous care. It reflects Pugin's interest in the revival of medieval craftsmanship and artistic design, as well as his own personal piety and devotions: for instance, the name-saints of his family members and friends feature prominently, as does a devotion to the Sacred Heart. And so, since the church is St Augustine's, the monastery across the road is St Augustine's Abbey, and Augustine was Pugin's name-saint - and, most importantly, Augustine arrived in Kent in the bay overlooked by the church - it's not surprising that the church features a large and impressive window depicting the story of Augustine's arrival. (I've previously posted about depictions of this story in modern stained glass at Minster-in-Thanet, Norwich and Canterbury, and I posted about Bede's telling of it here). The window, set in the Pugin family chapel - a chantry chapel, really, that truly medieval thing - is large and imposing, with rich colours. Here's the whole: 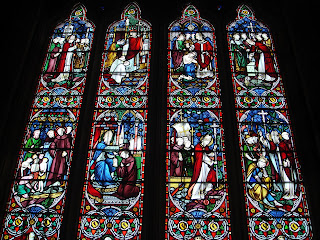 I'm afraid I failed to photograph the first two scenes, the usual 'non Angli sed Angeli' encounter with the English slave-boys in Rome and Pope Gregory giving Augustine the commission to convert the English. But there's a particularly charming depiction of the landing at Ebbsfleet: 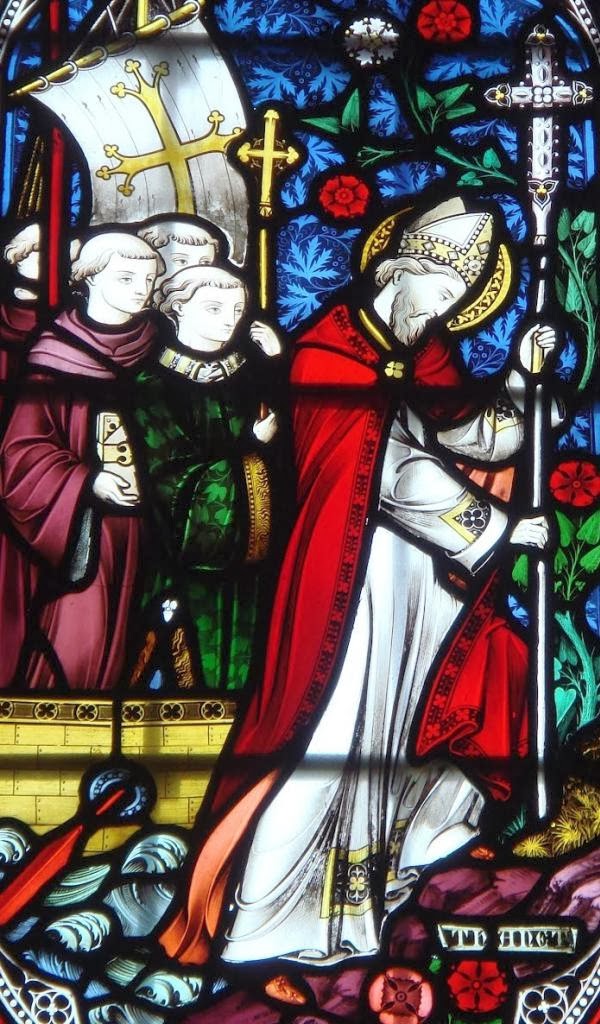 Note that the land is labelled: 'Thanet'. Augustine proceeds to preach to King Ethelbert: 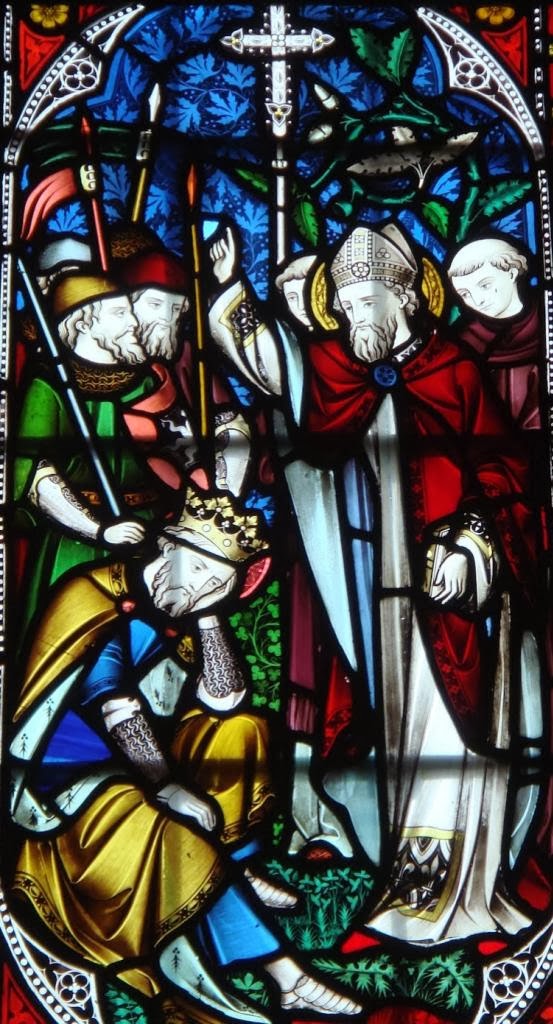 St Augustine and his monks process to Canterbury... 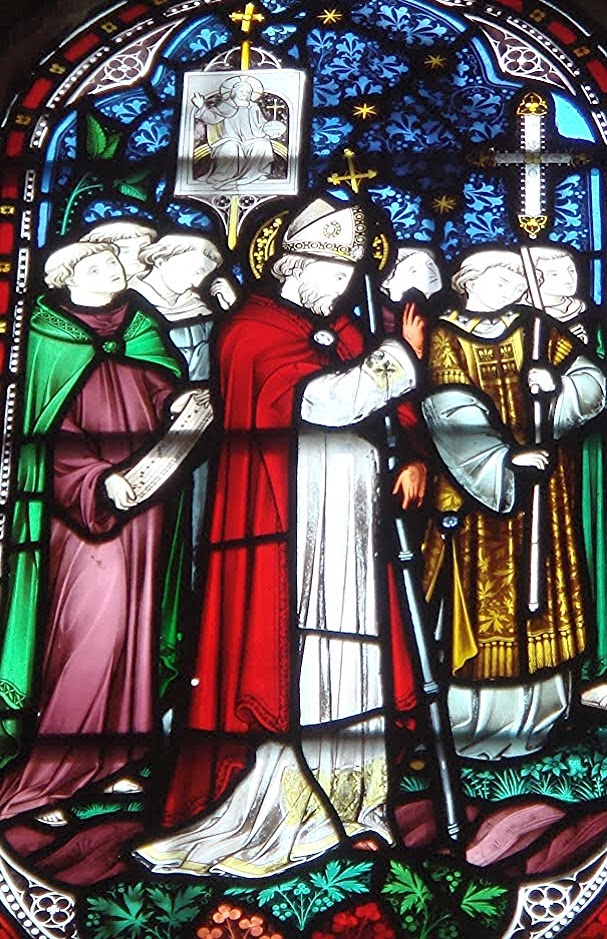 ...and then say Mass at the church of St Martin's in that city, which pre-dated Augustine's arrival; it had been a Christian church in Roman times, and was used by Queen Bertha as her private chapel. She is the female figure in the background: 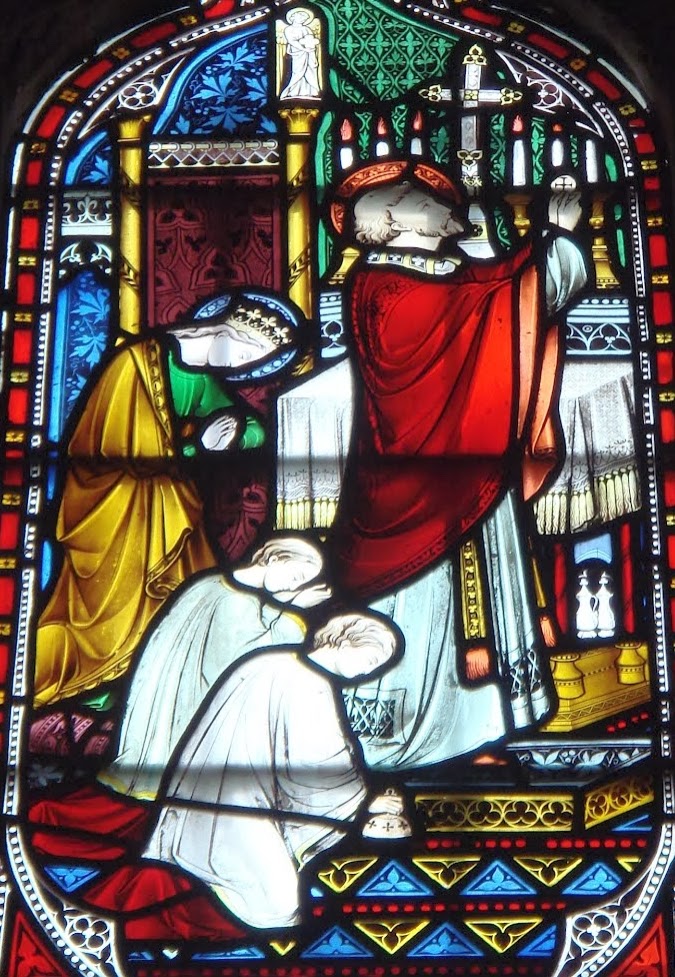 I like this window very much - especially those colourful tiles, and the little flames of the candles on the altar.

Next, Ethelbert's baptism by Augustine: 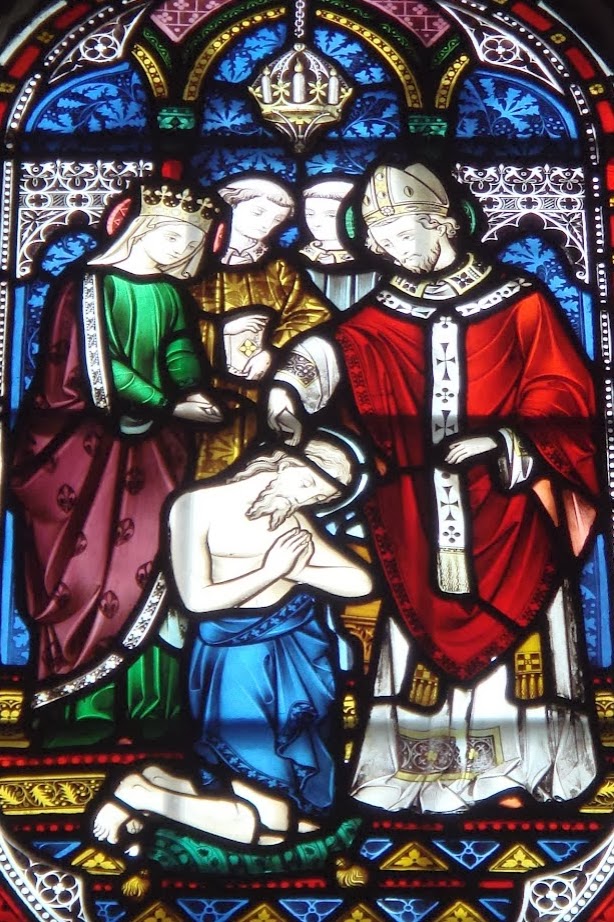 More delightful tiles! And the laying of a foundation stone of a church: 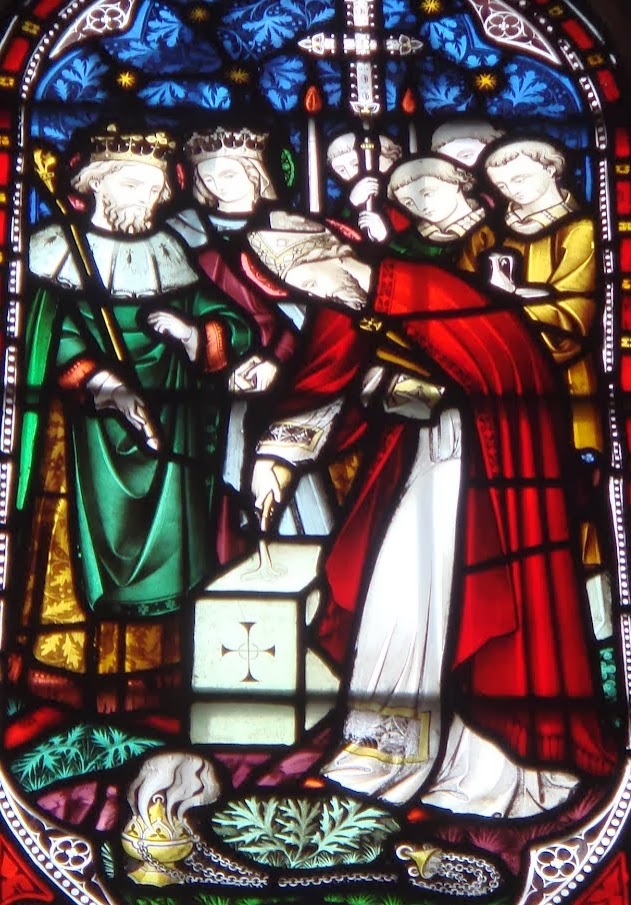 This strikes me as an unusual addition to the story, and although it was perhaps included to make up the round number of eight scenes, it is of course symbolic of the (re)founding of the English church. Building and rebuilding churches was one of the earliest things the Gregorian mission did, but since the first Canterbury churches to be given to them were pre-existing buildings, I wonder if this scene represents the laying of the foundation stone of the monastery of St Peter and St Paul, which was later, after Augustine's death, to become St Augustine's Abbey. This would have an obvious significance to the monks who served Pugin's church - the Canterbury St Augustine's is today in ruins (alas!), and the Ramsgate St Augustine's must have been intended as a kind of rebirth, an heir to its ancient heritage. The monastery at Ramsgate was the first Benedictine monastery to be built in England after the Reformation; the monastery at Canterbury the first Benedictine monastery in England, full stop. No wonder its foundation had particular importance here.

To illustrate the personal resonances of this window, beneath which is Pugin's effigy and tomb (designed by his teenage son after Pugin's early death), consider these two pictures: 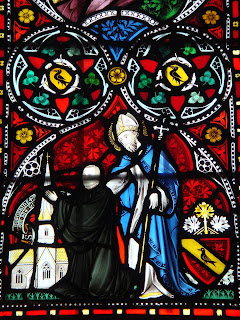 This, in the style of medieval donor depictions, shows Pugin himself with St Augustine and the church he built (complete with the planned spire, which was never actually added), with his family crest and the distinctive symbol of the black martlet. Running along the bottom of the Augustine window are three more panels like this of his three wives, each with her patron name-saint - here's one, in a beautiful grey gown and cloak, with St Anne: 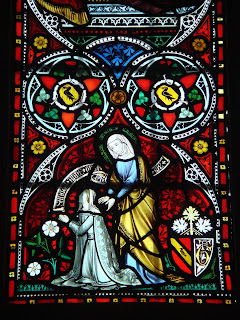 This is getting long, but to return briefly to the Anglo-Saxons - Ethelbert and Bertha reappear in their own windows elsewhere in the church: 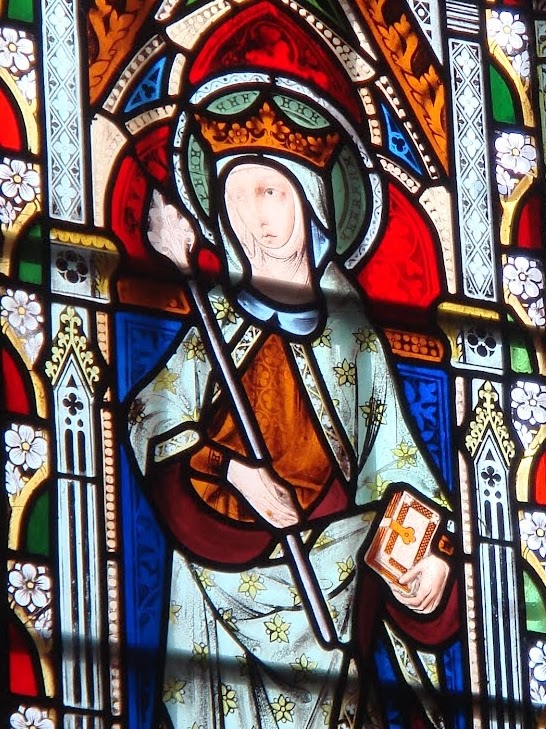 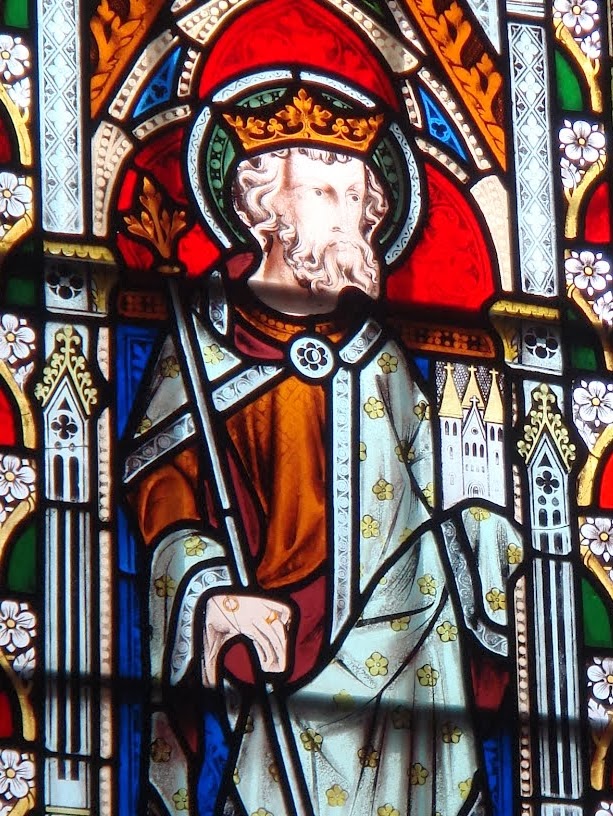 Nearby is the Anglo-Saxon bishop John of Beverley: 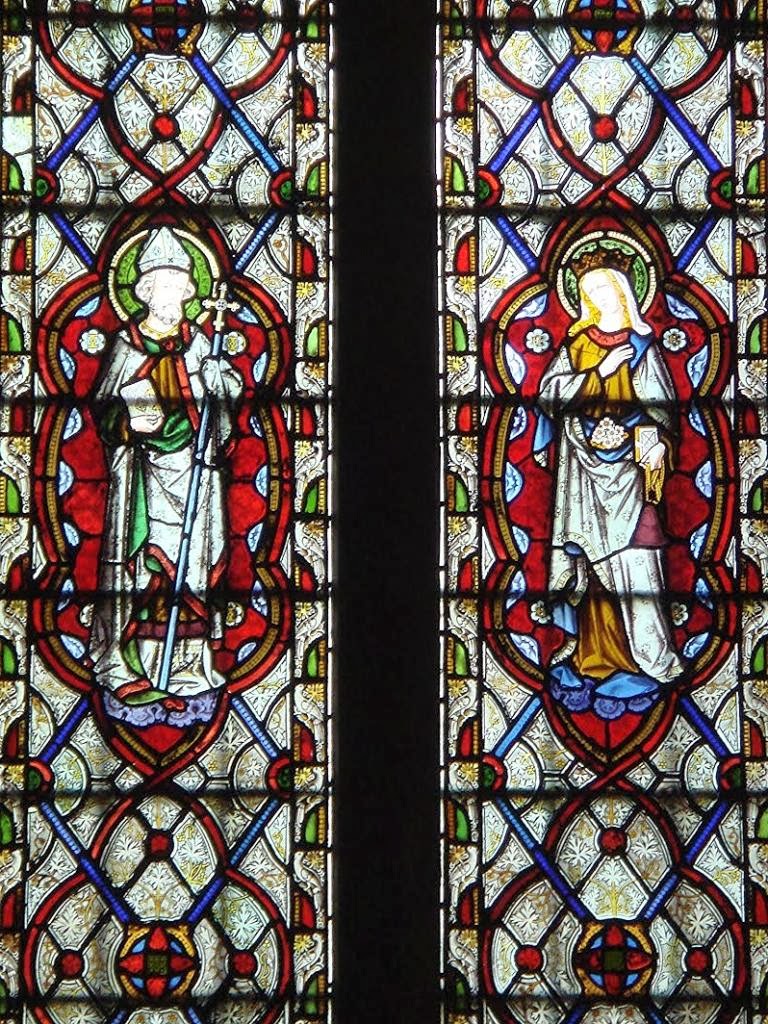 There's a lovely window on the north wall of the church, depicting three female saints in star-strewn robes: 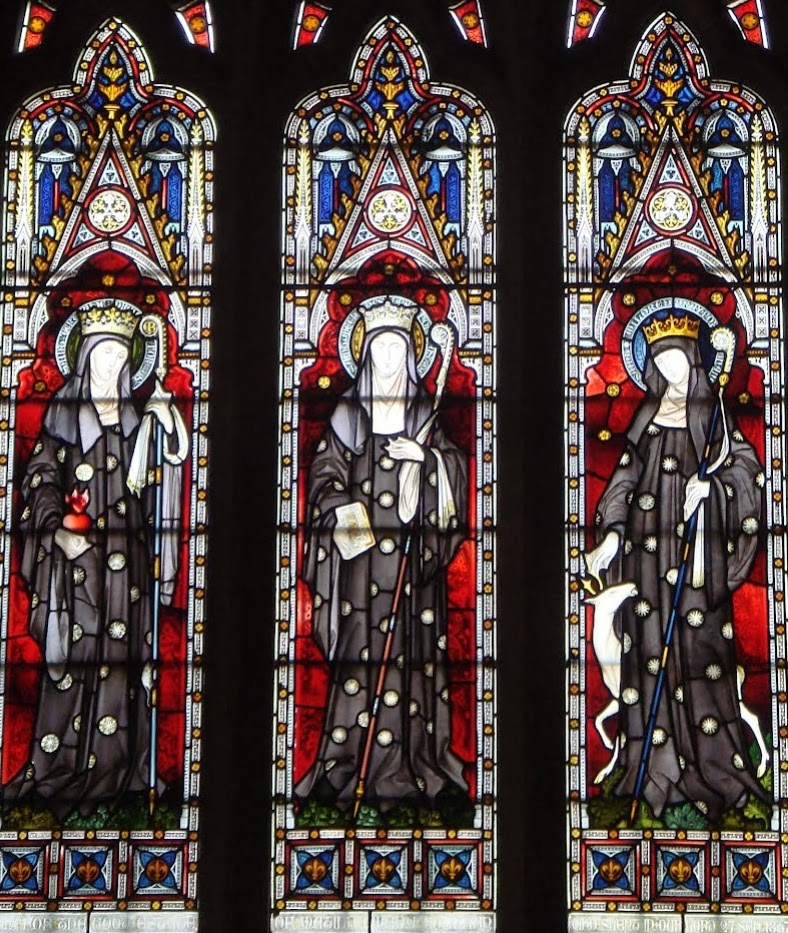 I couldn't get a very good picture of it, sadly, but the figure on the right is my own favourite Mildred of Thanet, another local saint, with her deer. (If you were wondering, the other two are St Gertrude and St Mechthilde).


Let's finish with this lovely window of three northern saints, Bede, St Wilfrid, and St Cuthbert (holding the severed head of St Oswald). These are of course three of the greatest saints of the Northumbrian church, and thus a suitable complement to the depictions of Augustine, Mildred, Ethelbert and Bertha - champions of southern Christianity. However, they're also appropriate because Bede, Wilfrid and Cuthbert were the names of three of the first monks to live at St Augustine's in Pugin's time.

A close-up of Bede, because, well, he's Bede: 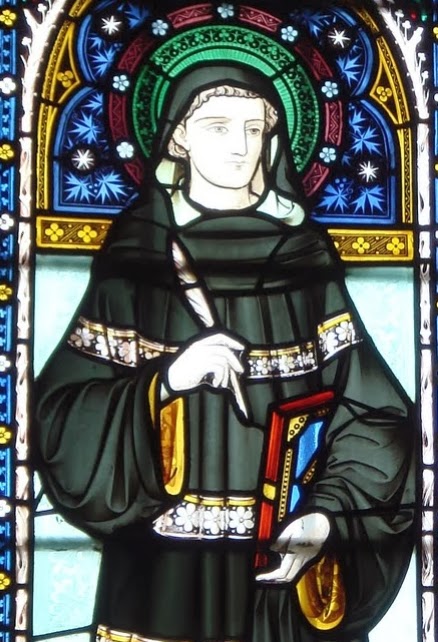 I like depictions of Bede as a younger man - before he was Venerable!
Posted by Clerk of Oxford at 10:53 am