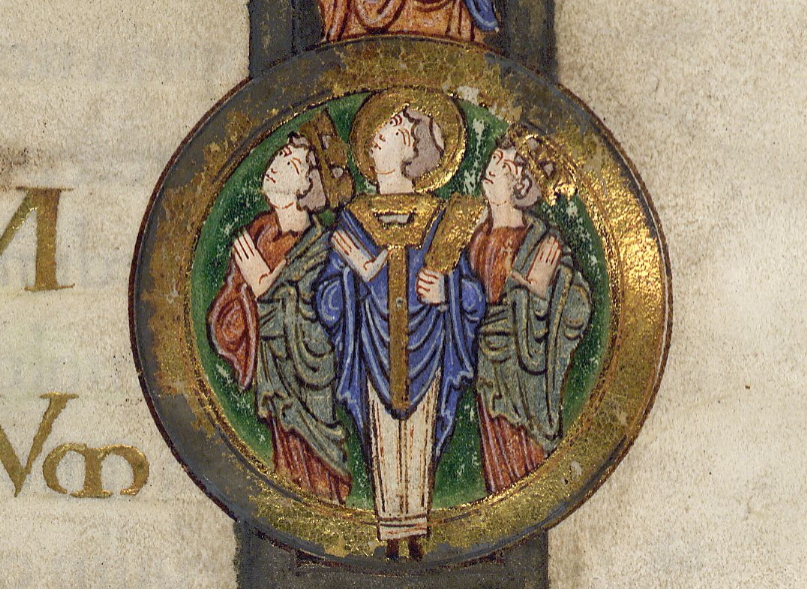 Æthelnoth, Archbishop of Canterbury, died in the last days of October in the year 1038, and in some places (Canterbury, mostly) they commemorate him on October 30. Æthelnoth is a fascinating figure to me, because he embodies some of the most intriguing questions about cultural and national identities in eleventh-century England: how and why did this English churchman, so thoroughly a product of Anglo-Saxon society at its confident best, become someone who could work closely with the Danish conqueror Cnut, aligning himself with the interests of a new Anglo-Danish regime?

Æthelnoth was born, some time in the second half of the tenth century, into a noble Anglo-Saxon family based in the south-west of England. He was connected to some very illustrious people: he was descended from one of the brothers of Alfred the Great, his grandfather was the chronicler and cultured ealdorman Æthelweard, and his father Æthelmær was the founder of Eynsham Abbey and patron of the homilist Ælfric. This was a powerful and pious family which cherished its roots far back in the royal line of the kings of Wessex, well-connected players in contemporary politics but with sophisticated literary and spiritual interests too. According to tradition Æthelnoth was baptised by no less a person than St Dunstan himself, and at the baptism raised his hand in a gesture of blessing, which Dunstan interpreted to mean that the baby would be an archbishop one day. In time Æthelnoth became a monk at Glastonbury, where Dunstan had been abbot before his elevation to Canterbury.

Although he was born into a time of relative peace, Æthelnoth's life was to be shaped by the troubled period leading up to Cnut's conquest of England in 1016: more than two decades of Viking attacks from without and internal political chaos splitting the kingdom from within. As ealdorman of the western shires (I love that title!) it was Æthelnoth's father who led the west's submission to Svein Forkbeard in 1013, and a few years later Æthelnoth himself seems to have participated in some kind of ceremony which bestowed legitimacy on Cnut as victorious conqueror and king of England: either a confirmation ceremony in 1016, or a coronation in 1017. (Thanks to the Canterbury writer Osbern we know Æthelnoth 'bestowed chrism' on the king, but we don't know exactly what ceremony this refers to.) It would be fascinating to know whether Æthelnoth had much choice in this: in 1017 Cnut had Æthelnoth's brother killed, as part of a last purge of the English aristocracy. 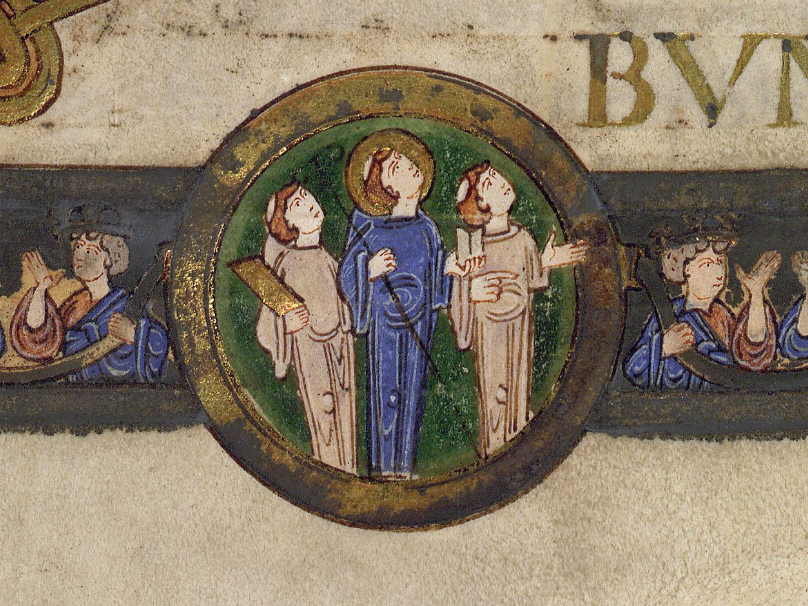 In 1020 Æthelnoth was appointed Archbishop of Canterbury, presumably in part because he was already a trusted supporter of the new Danish regime. How did that come about? If only we knew... He was consecrated archbishop in the year of the foundation of the church at Assandun, about which I wrote recently, and after he became archbishop Æthelnoth and Cnut seemed to have worked well together, improbable though such a pairing may appear. Æthelnoth was the impetus behind the ceremonial return to Canterbury in 1023 of the body of St Ælfheah, the archbishop one before Æthelnoth, who had been murdered by a Danish army in 1012. The return of the martyr's body to Canterbury was a large-scale public spectacle, involving the body being taken by ship from St Paul's, where the archbishop had first been buried, down the Thames to Kent. Cnut, Emma and their little heir Harthacnut were all in attendance, and this grand occasion - masterminded, presumably, by Æthelnoth - was an effective piece of political theatre, righting one of the cruellest wrongs of the Danish Conquest, the murder of the elderly, saintly archbishop. Osbern, in his account of this event, paints an attractive picture of Cnut and Æthelnoth cheerfully working together as they retrieve the martyr's body from its tomb and take it down to the royal dragon-ship. This is mostly a product of Osbern's ever-vivid imagination, but something about it rings true. This is only one of the occasions on which Æthelnoth aligned himself closely with Cnut and Emma, and consequently he gets a rave review in the Encomium Emmae Reginae (written a few years after his death) which calls him "a man gifted with high courage and wisdom" because after Cnut's death he refused to crown Cnut's 'illegitimate' son Harold Harefoot - saying that no one should be king but Emma's son Harthacnut. Harthacnut did indeed become king in 1040, but Æthelnoth didn't live to crown him; he died in the middle of Harold's reign, in 1038. One version of the Anglo-Saxon Chronicle (D) records his death as follows:


'In this year died Archbishop Æthelnoth the Good, and Æthelric, bishop in Sussex, who had prayed to God that he should not be permitted to live a long time after his dear father Æthelnoth, and he died too within a week.'

The title 'Æthelnoth the Good' and this little note about the bishop's answered prayer suggest there were some people inclined to consider Æthelnoth a saint, but this never really came to fruition. In the years after his death the Anglo-Danish regime which Æthelnoth had so staunchly supported collapsed with the early death of Harthacnut. Canterbury was a troubled place in the reign of Edward the Confessor and directly after, and it's not surprising that a cult of Æthelnoth did not take hold; by this point it was no longer a good thing to have been closely aligned with Cnut. But I can't help wondering if things had gone differently, if Harthacnut had lived, whether 'Æthelnoth the Good' might have acquired a reputation somewhat like that other survivor of conquest, St Wulfstan of Worcester: a unifying figure, a promoter of peace and reconciliation, and a saint. 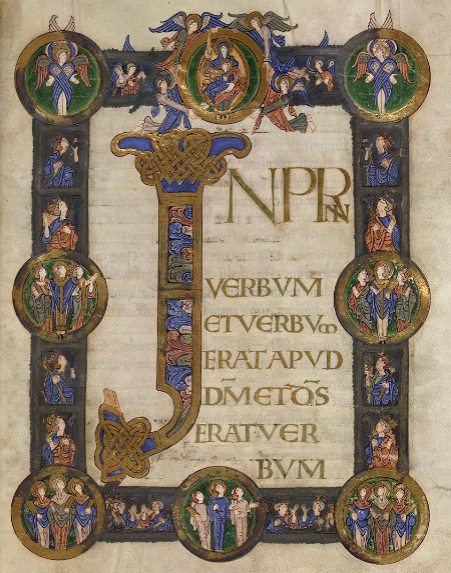 The illustrations in this post come from the 'Grimbald Gospels' (BL Additional 34890), a gorgeous manuscript produced at Canterbury around the time Æthelnoth went there. It's one of several lavish manuscripts made at Canterbury in the years 1012-23 - books of breathtaking beauty, created in the middle of wartime and the first years of uneasy peace.
Posted by Clerk of Oxford at 11:10 am

Another very thought provoking post. You never mention the pope as an actor in these turbulent years, but popes were very much involved in royal consecration (which required papal consent or was otherwise an excommunication offense for both officiating bishop and would-be-king or queen). Excommunication of a king or duke was serious as it effectively meant that anyone could depose them with the pope's blessing, clerics were forbidden from giving services (and they ran all ledgers and books), they were denied burial in consecrated ground, and their children were ineligible for succession as heirs.

Duke Robert I of Normandy was excommunicated in 1027 for taking the duchy without papal approval, raiding Fecamp Abbey (which held the royal treasury), and abusing his uncle the archbishop. He had to buy his way back into the grace of the church with a huge amount of wealth and a pilgrimage to Jerusalem, where he died on the return trip. It was about 1051 that Duke William of Normandy and Mathilda of Flanders were excommunicated for marrying against papal dictate. And both Stigand (uncanonical archbishop and already excommunicated by four popes) and King Harold were excommunicated in 1066 for proceeding without papal consent on the death of King Edward.

King Cnut probably secured papal consent to his consecration in London in 1016 by assuring the Holy See a continuation of London's privileges as a free port and restoration of church cash flows, much as William would do again in 1066. He then secured further papal consent to Emma's consecration as queen in 1017 by granting Rameslege (Rome's law or Rome's region - the huge port from Sedlescombe to Rye and Winchelsea) as a free port to Fecamp Abbey in Normandy, another religious order in the Holy See and also the place where Emma's three children by Aethelred were being raised in exile. Aynsham Abbey was given the same port in 1005 by King Aethelred, until in 1014 he promised it to Fecamp Abbey while he and his family were in sanctuary in Normandy. Aethelred's souring on Aynsham may have been caused by Aethelnoth's going over to King Sveyn in 1013.