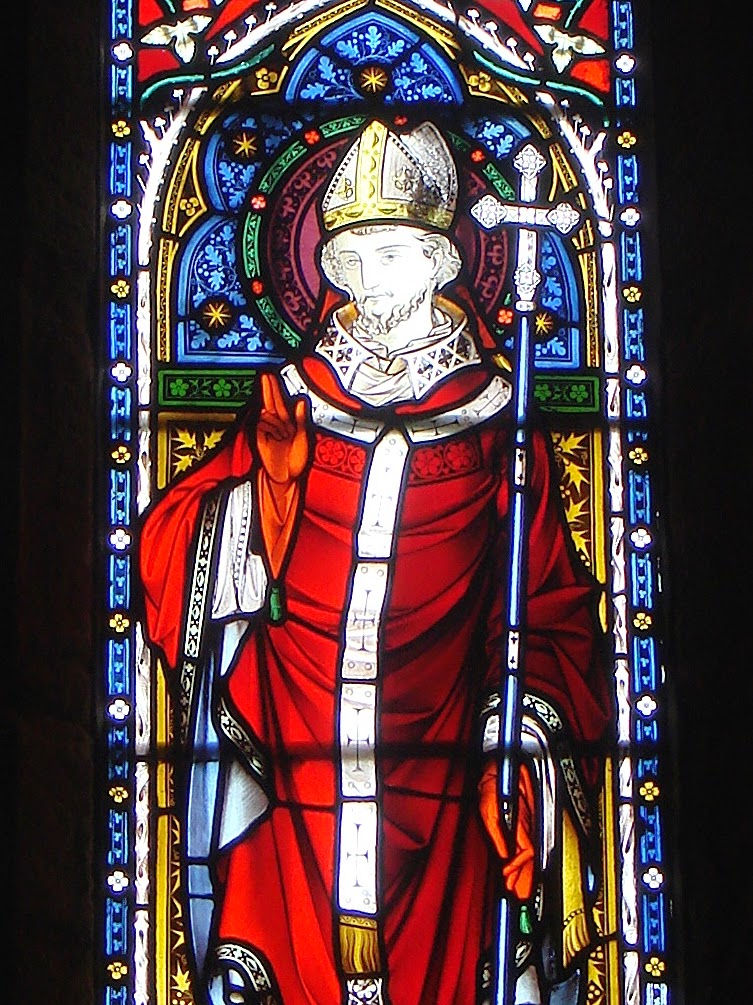 I've recently been reading a Life of St Wilfrid which was written in the last decade of the eleventh century by the English monk and historian Eadmer of Canterbury. Wilfrid, who died c.709, was an important figure in the early history of the English church, but my interest is less in him than in Eadmer, who chose Wilfrid as the subject of what was (probably) his first major work of hagiography, undertaken when he was around thirty years old. Eadmer was interested in Wilfrid because Canterbury believed it was in possession of the saint's relics, which had been brought there from Ripon by Archbishop Oda in the tenth century. (Oda, grandson of a Viking, was to be the subject of Eadmer's second hagiographical work.) Wilfrid was thus one of a group of saints from the Anglo-Saxon period whose lives were being thought about and written about at Canterbury in the decades after the Norman Conquest: Oda, Dunstan, Alphege, Augustine and his companions, Mildred, and more. Eadmer doesn't add much to his sources for Wilfrid's life, except what relates to Canterbury's claim to Wilfrid's relics: he describes Oda's translation of the relics to Canterbury and how, after the fire which devastated the cathedral in the year of the Norman Conquest, they were reburied in Lanfranc's new church:

Although [the relics] were preserved unharmed in their first setting for many years, and from the time in which they were first placed here a hundred years and more had elapsed, by the just and secret judgement of Almighty God nearly the entire city of Canterbury was then burnt by fire, and the church built in Christ's name there was set alight in the same conflagration. In the third year after this blaze, Lanfranc, of both happy and glorious memory, the abbot of the monastery at Caen, was appointed to govern that church. After he had been honourably confirmed everywhere in the patriarchate of the foremost see of the English, he demolished whatever ancient parts of that church remained because he intended to rebuild everything anew. And when the altar mentioned previously was tipped over, the relics of the blessed Wilfrid were discovered and raised up and placed together in a shrine. When after a number of years there was agreement among the brothers that it would be more fitting for the relics to be enclosed in a permanent position, a tomb was constructed for them on the northern side of the altar and they were placed within it on the twelfth of October. 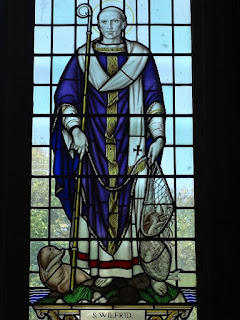 Wilfrid, from Chichester Cathedral
(with a seal, because he was bishop of Selsey...)

Eadmer also records two visions witnessed by monks of Christ Church on Wilfrid's feast day, probably in the 1070s. Since at Canterbury Wilfrid's feast was kept on 12 October (in other places it was on 24 April), I thought I'd post these stories today. These stories can both be found in Eadmer's Breuiloquium Vitae Sancti Wilfridi, in Muir and Turner, Vita Sancti Wilfridi Auctore Edmero: The Life of Saint Wilfrid by Edmer, pp.179-81, from which all the quotations are taken. 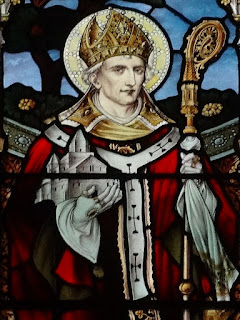 Wilfrid, in a window from St Etheldreda's, Ely

The first vision was experienced by a monk named Godwine, "a man of great simplicity and innocence", who was a former sacristan of the monastery. While asleep on the eve of Wilfrid's feast, he was woken by sounds in the choir: he heard the singing of the familiar chants appointed for the beginning of the vigil - Domine, labia mea aperies; Deus, in adiutorium meum intende - and the Psalm, Domine, quid multiplicati sunt. Then he heard voices singing Unum Deum in Trinitate fideliter adoremus, cuius fide Deo uiuit sanctus presul Wilfridus - "Let us faithfully worship one God in the Trinity, through faith in whom holy Bishop Wilfrid lives in God". When he heard this, Godwine thought he must have overslept, so he jumped up and hurried to the choir, chastising himself for his laziness. He reached the entrance to the choir and hesitated, realising that he didn't recognise the voices which were singing as those of his brother monks.

Then he looked into the choir, and it was empty. Since he could still hear the singing, he thought his eyes must be blurred by sleep, so he went to his usual place in the choir; but as he stood there he could see everything clearly, and there was no one there. But he could still hear singing - a multitude of voices in harmony. "But now it seemed to him that he was not hearing them singing psalms nearby, but rather from above, as if they were in the rafters of the church; and so, ascending as they sang and escaping as they ascended from the ears of the brother listening to them, these holy angels who had come, praising in hymns God who lives gloriously in his saint, once again sought the heavenly realms." 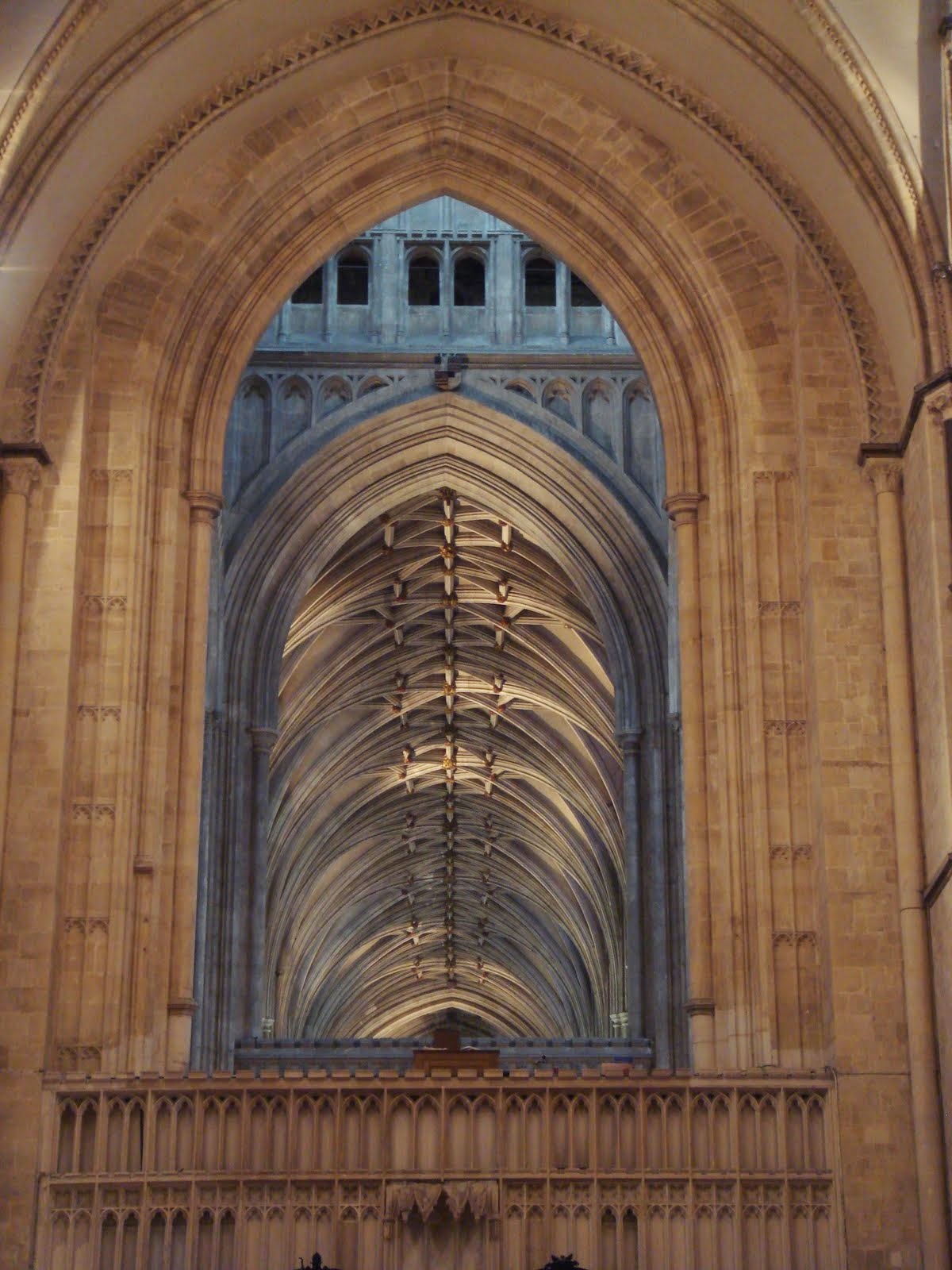 Canterbury arches (from after Eadmer's time, but close to the spot where Godwine stood)

The second miracle also concerns a sacristan of Christ Church, this time named Ælfwine, "a religious man and most worthy of credence". His miracle also took place on the feast of St Wilfrid, the year after Godwine's:

He says that on the very night of the festival he was resting outside of the choir in a certain elevated place in this church before the altar, above which at that time the remains of blessed Wilfrid had been placed on a bier; and while he was lying neither fully awake nor fully asleep, looking up he saw the whole church refulgent with a marvellous and indescribable light. Moreover, the altar itself seemed to be entirely made of gold and to be gleaming in an abundant array of precious stones. Meanwhile, in the choir he heard a great multitude of people pressed together singing the nightly vigils for Saint Wilfrid with festive music. And when it came to the lections and responses, he noticed that those whose duty it was either to read or to sing were mounting up the spiral staircase and bending down in front of the altar and before the blessed man's body as if to receive a blessing. When they had done this, they at once turned about and came down again and carried out in a most becoming manner the ritual of reading and singing where it is usually done in this church. 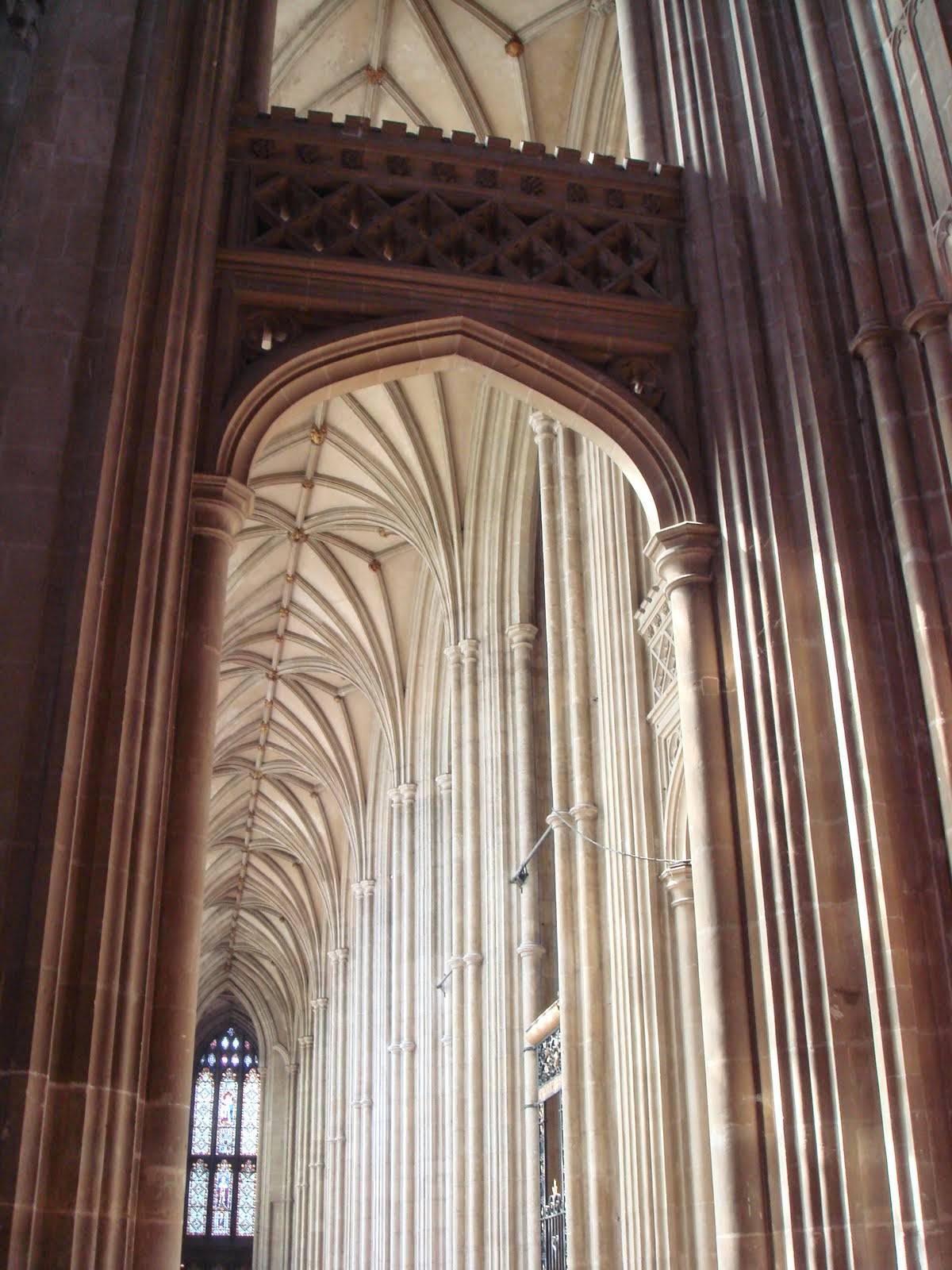 Two English monks, two miracles, both in the most familiar of settings to Eadmer and his Canterbury audience - within the liturgy and within the choir of their own cathedral. The power of such stories comes in part from the tension between familiarity and strangeness, that dream-like state between sleeping and waking in which the everyday and the expected is transfigured into something new and strange, and choirs of monks into choirs of angels. These visions are generically conventional, but so vivid - you can just picture the stream of music and the flood of light, as if the entrance to the choir through which Godwine hesitated to peep was the gate of heaven itself. 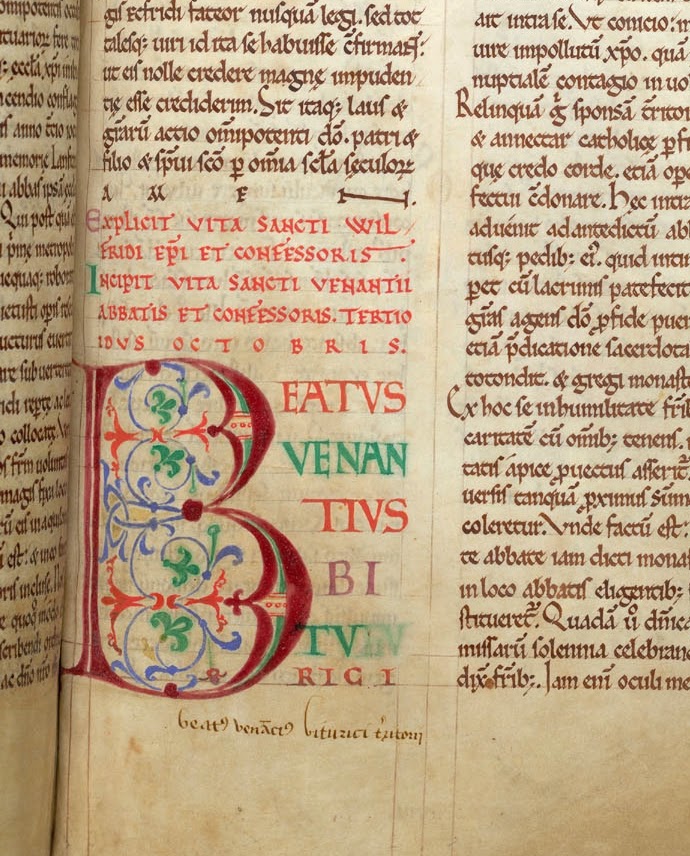 The end of Eadmer's Life of Wilfrid in BL Arundel 91, f.145
(made just across the road from Canterbury Cathedral at St Augustine's, c.1110)
Posted by Clerk of Oxford at 6:39 pm