Today is the feast of Oxford's patron St Frideswide, our very own Anglo-Saxon saint. According to legend Frideswide was the daughter of a Mercian king, who fled marriage to become a nun in Oxford on the site where Christ Church now stands. Besides Christ Church, the place in Oxford most associated with St Frideswide is Binsey, where legend says the saint took refuge from the king who wanted to marry her. While there she discovered a well which can still be seen in the churchyard at Binsey - a 'treacle well' of healing water (and inspiration for Alice in Wonderland's treacle well). This morning, it being a bright October day, I took a walk to Binsey.

I wasn't planning another photo-post after yesterday's mammoth effort, but I never can help taking pictures when I go to Binsey, so here they are for your enjoyment (or not, I suppose). For me, Binsey and Frideswide are a bottomless well of associations, literary, historical and personal, but I said pretty much all I want to say about that in this post about Binsey and this post about Frideswide. So today I'll try not to say more than is necessary. 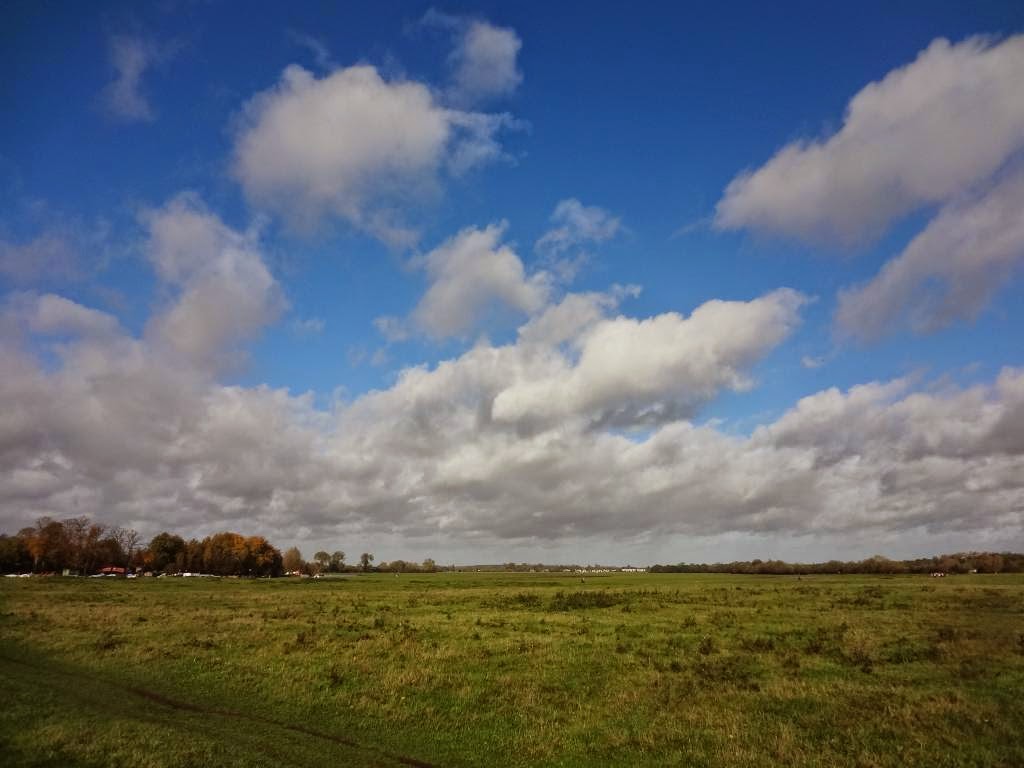 I walked to Binsey by way of Port Meadow, which probably looks much as it did in Frideswide's time. This large area of common land has never been ploughed (so they say) and its history goes back long before Frideswide, to Bronze Age barrows and Iron Age settlement, and by comparison Frideswide's Oxford seems like a thing of yesterday. 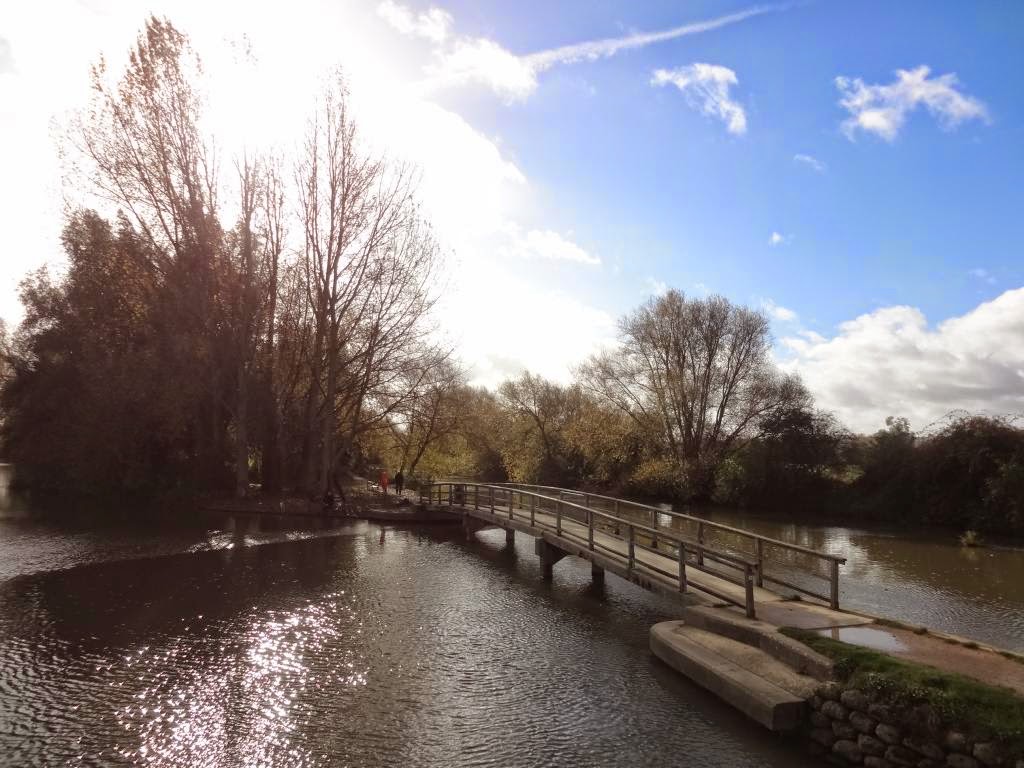 In the fourteenth-century Middle English Life of St Frideswide (which I posted here) it says that when she learned she was in danger from the pursuing King Algar, she fled down to the Thames and found a boat, miraculously ready for her, and an angel to guide her from Oxford to Binsey.

To Temese heo yede and fonde a bote al preste, thorw Godes sonde,
And therin heo fonde an angel that broght hem to the londe. 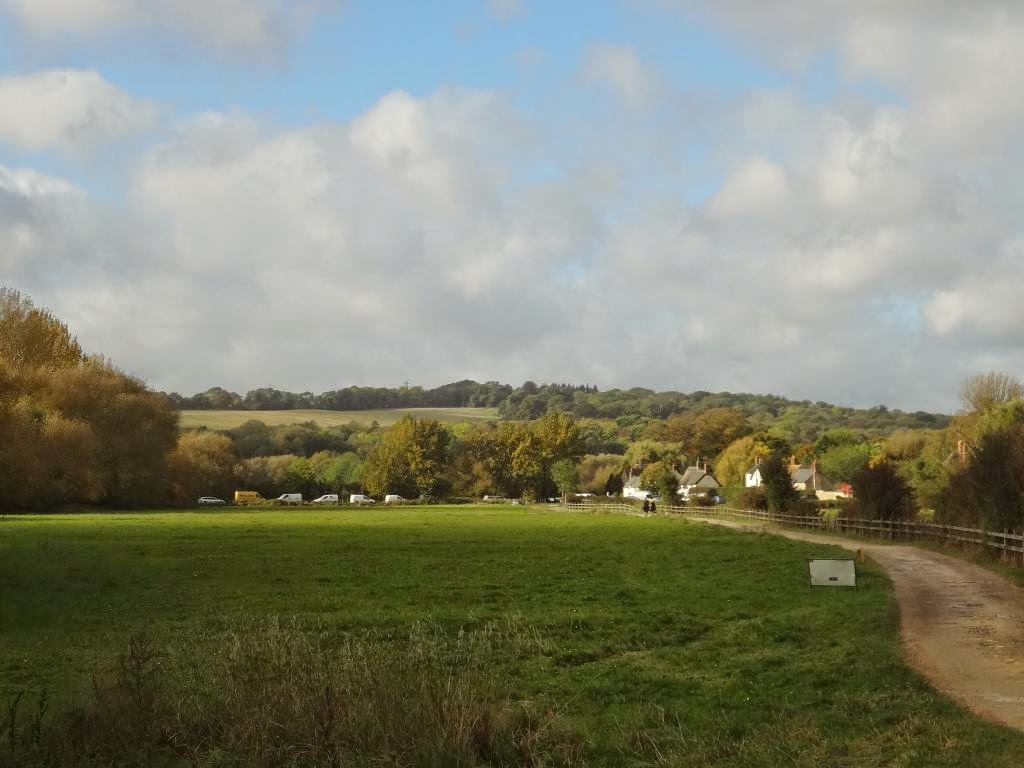 I didn't have an angel, but you can't get lost going to Binsey; the road doesn't go anywhere else. 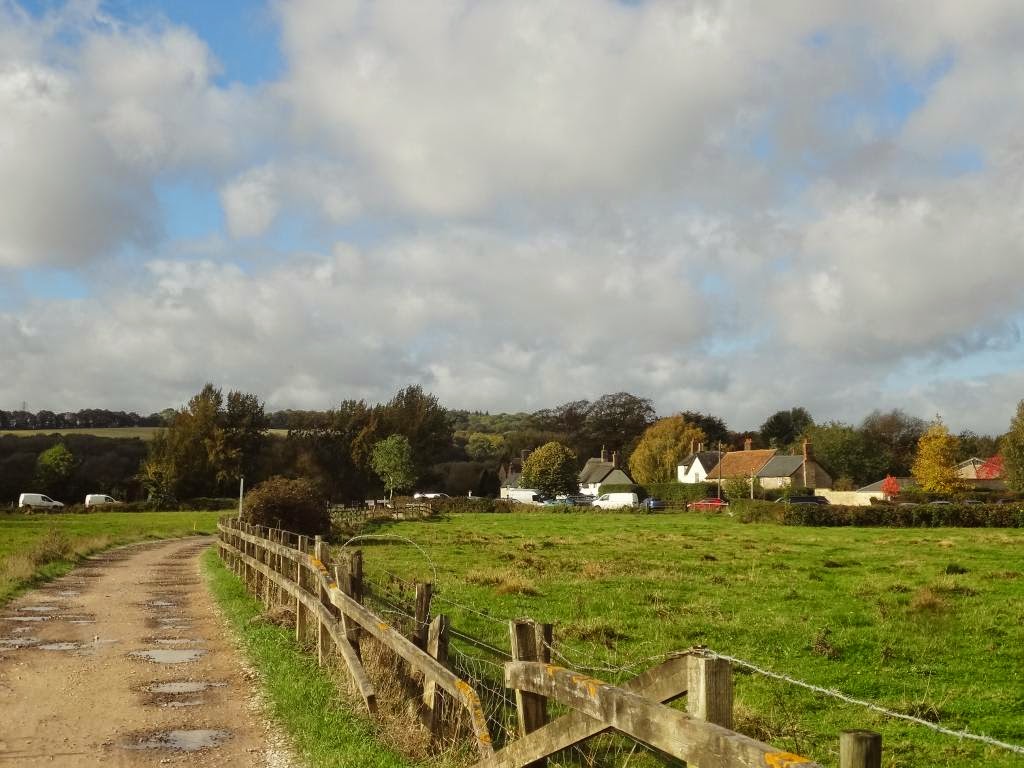 Binsey is not really big enough to be a village - I'm not even sure it qualifies as a hamlet. It's a row of houses and a pub; even the pub is picturesque. 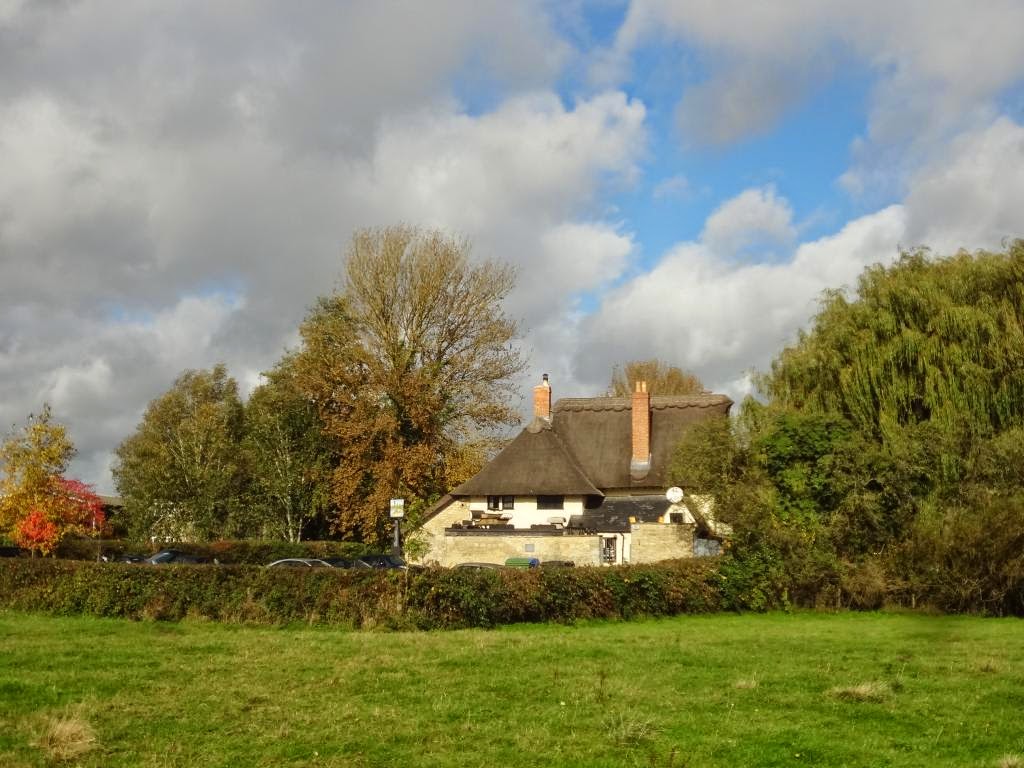 The road to the church and the well goes past the houses and out among fields, touched today by autumn colour and lit by fitful sunshine. 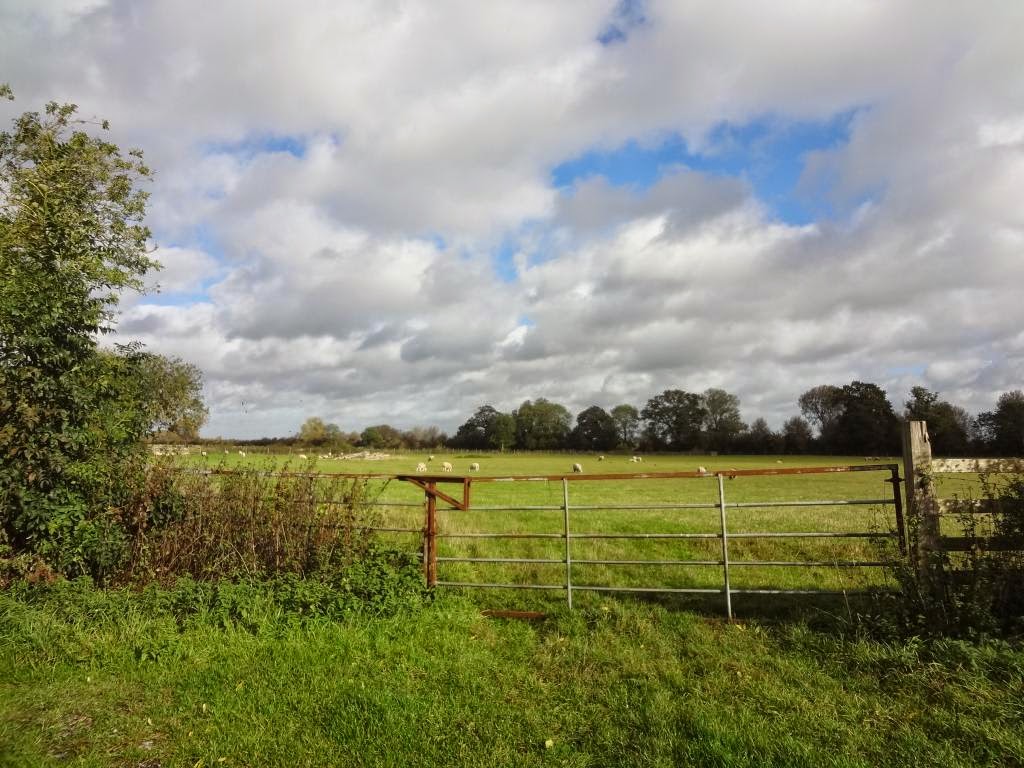 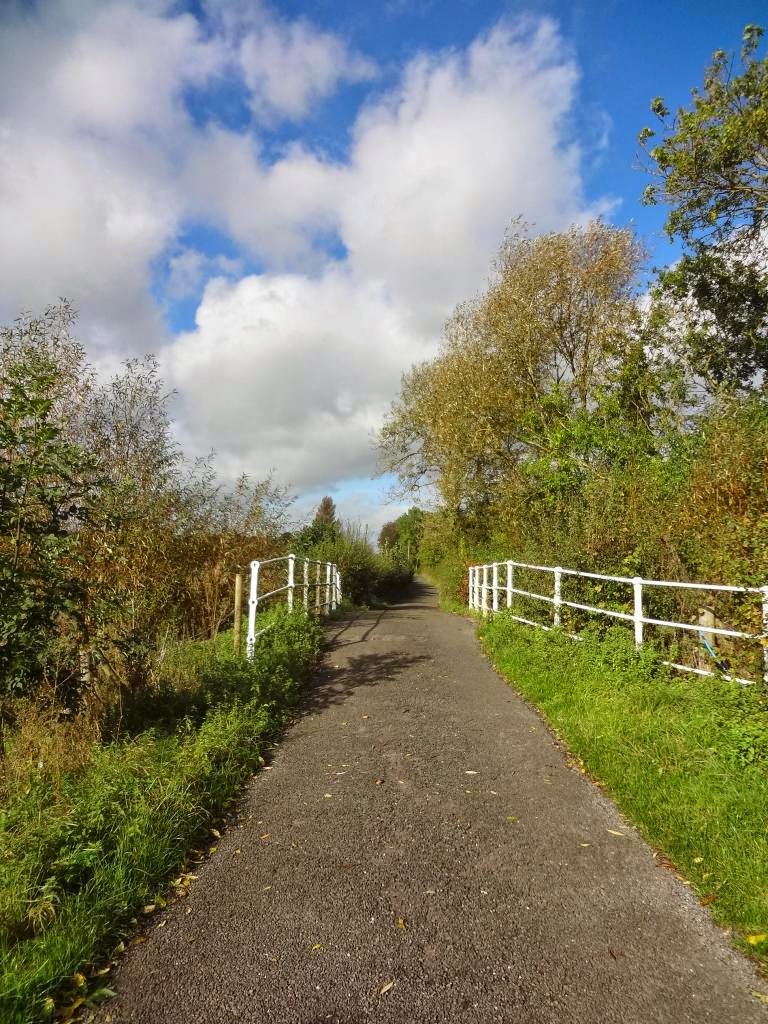 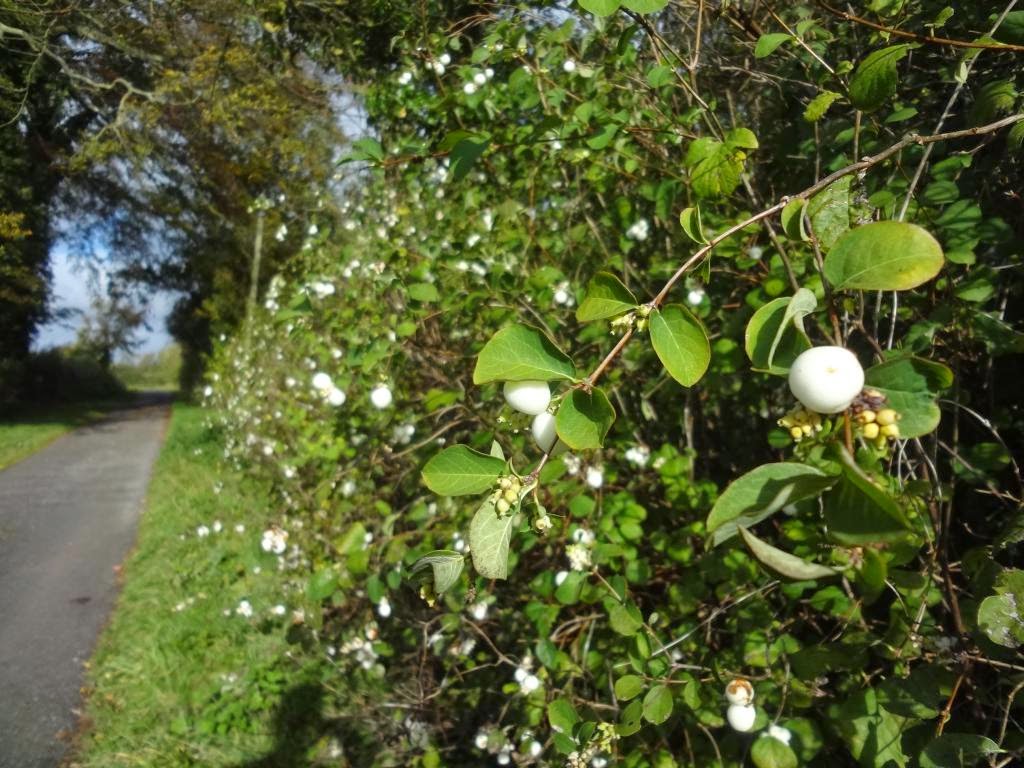 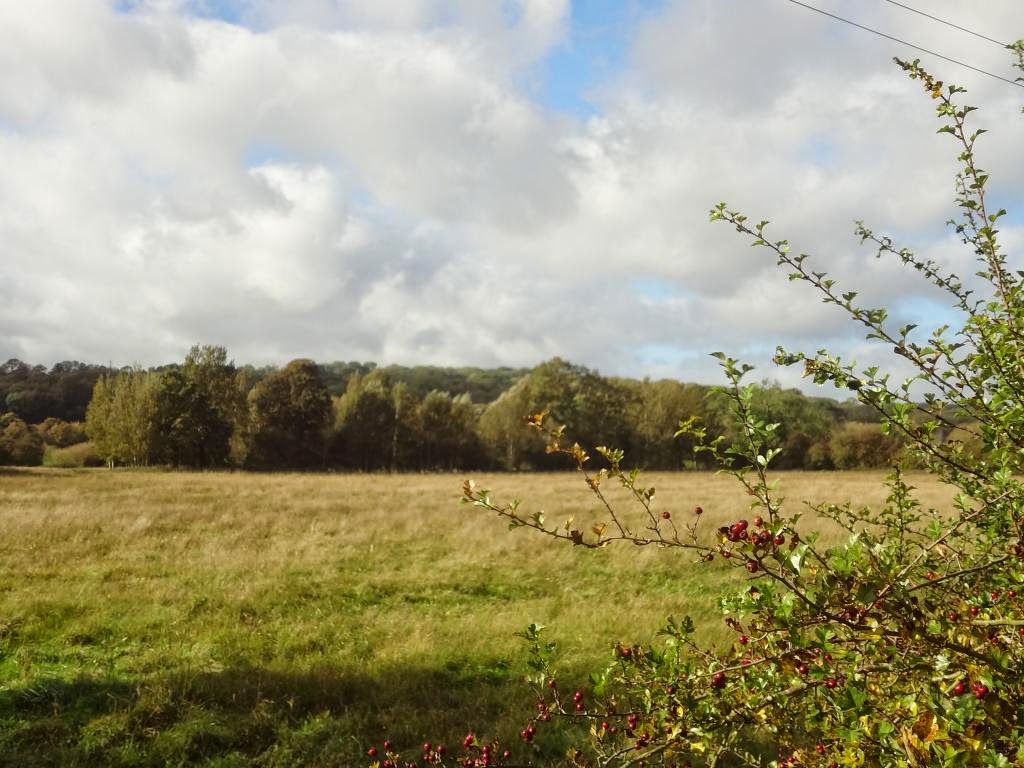 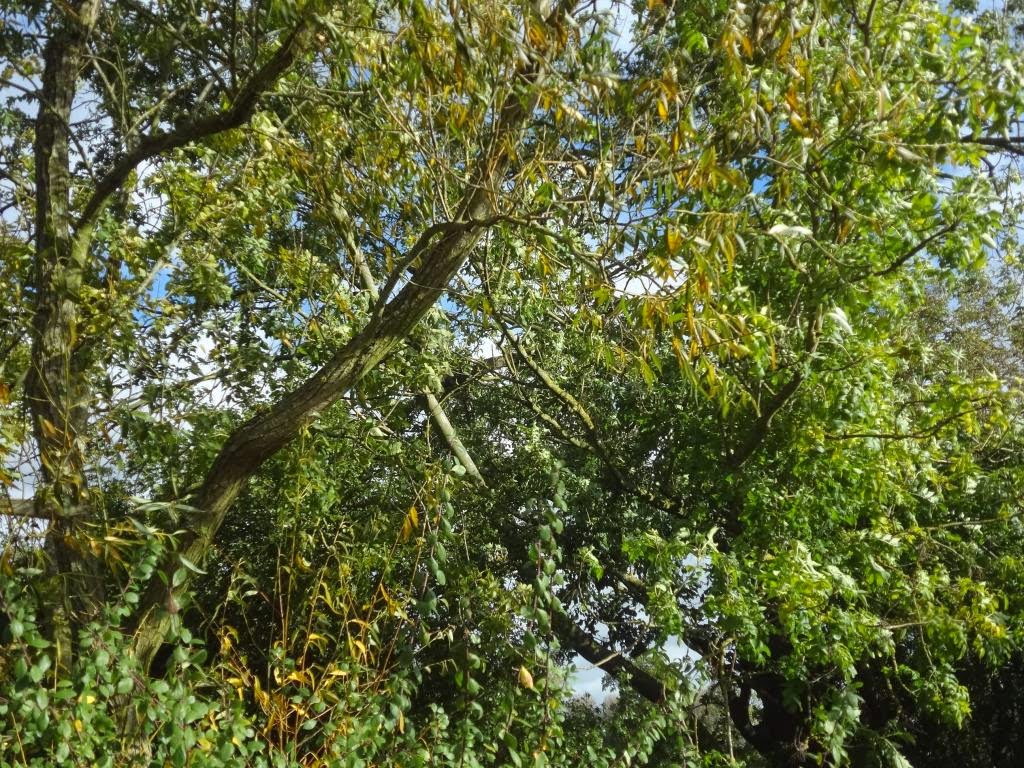 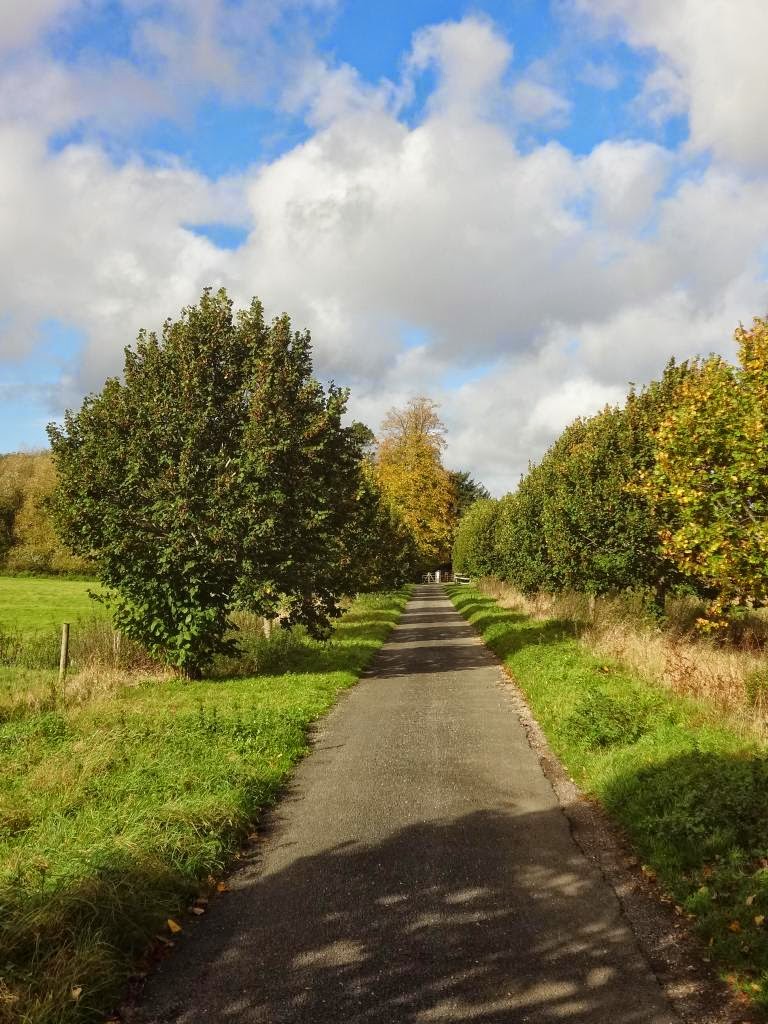 The church is at the end of this road, concealed by the trees.

In a wode that Benesy yclyped ys al day
Thre wynter in an hole woned, that seylde me hure say... 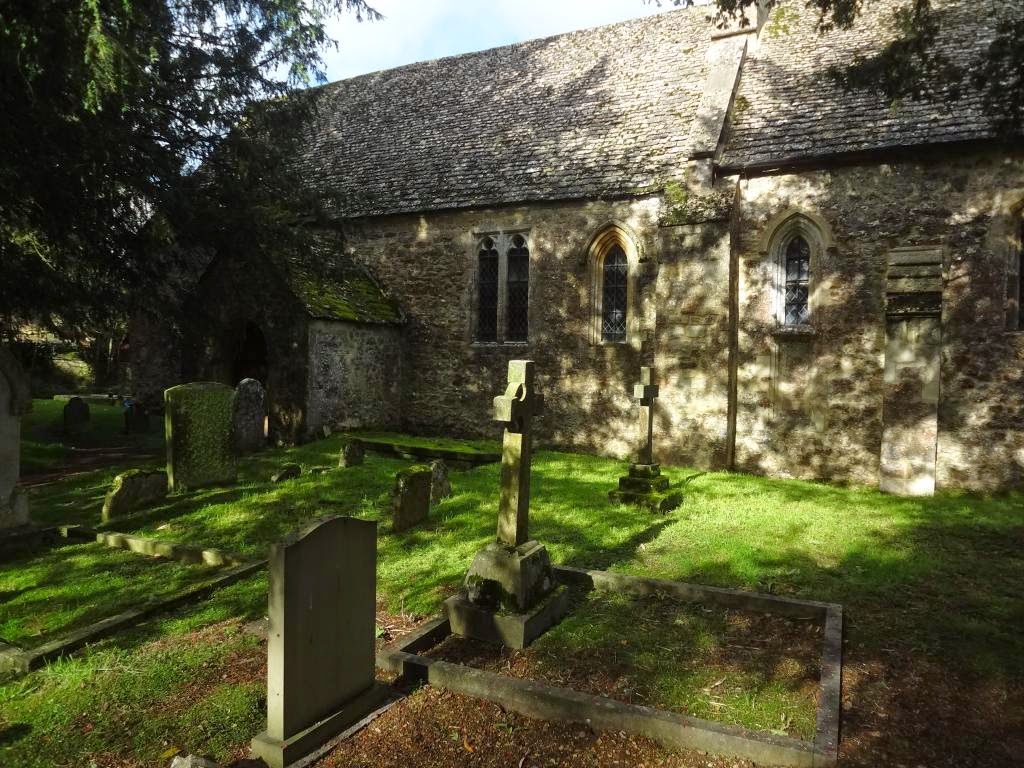 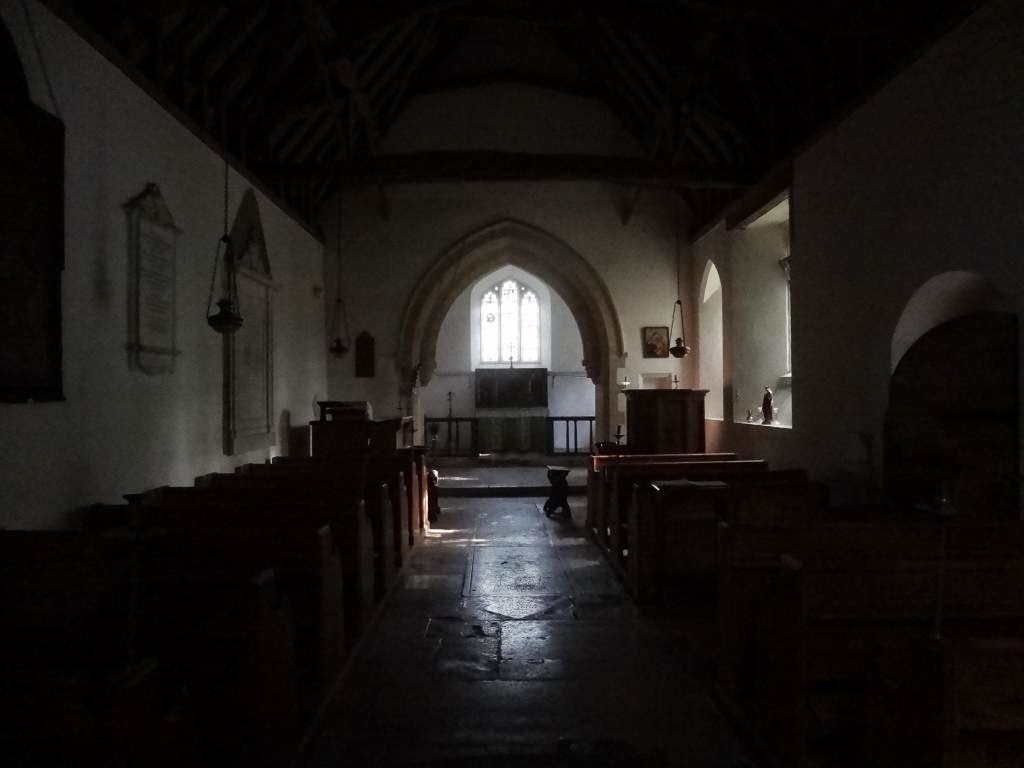 Binsey church has many charms, especially when you have it all to yourself on a Sunday morning, but it's very dark and very damp. Everything was clammy to the touch - stone, wood, paper left on the pews. Even the light is murky, like being underwater. 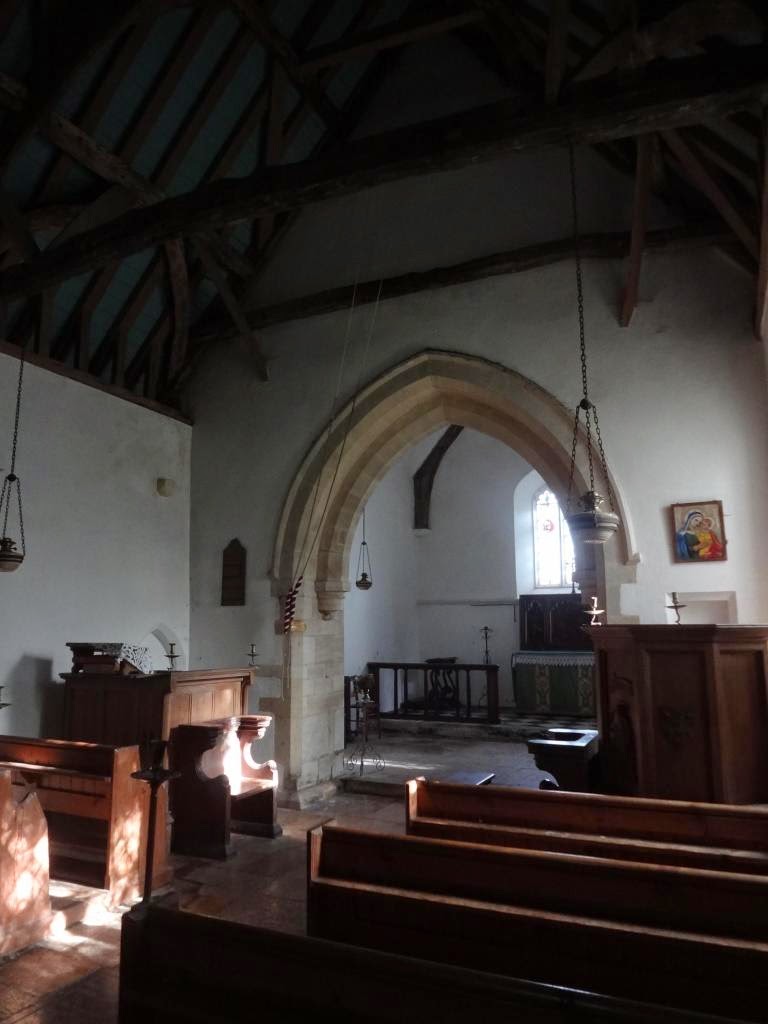 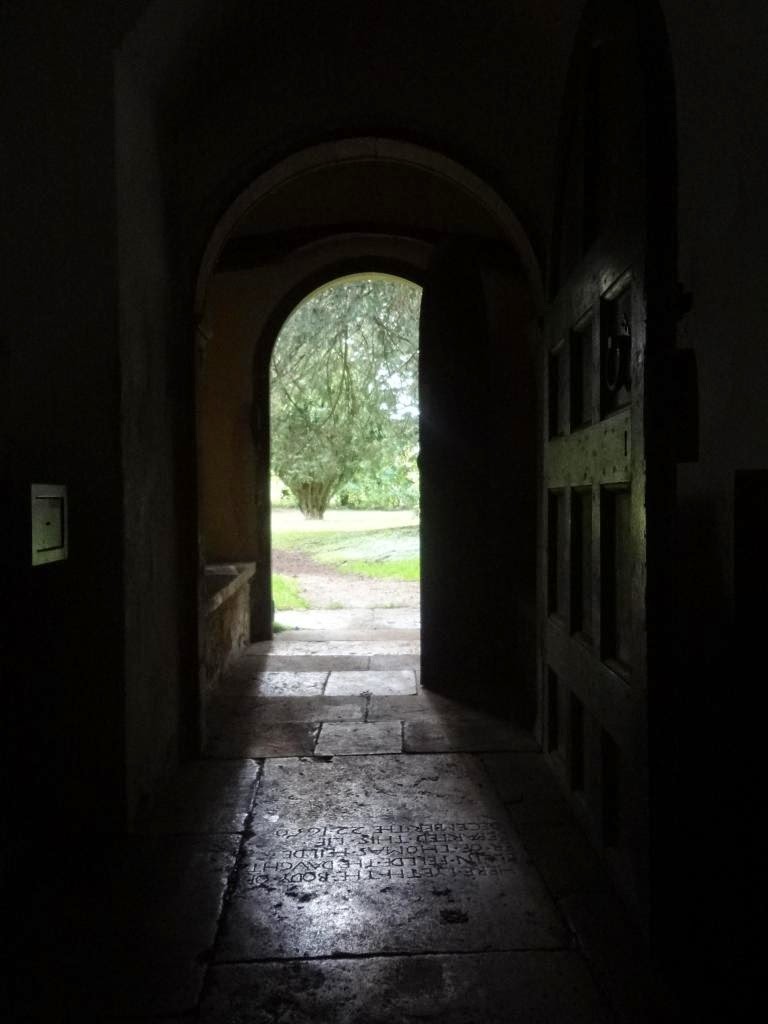 It was a relief to get back outside, though the churchyard too is damp and dark, overshadowed by huge trees. It's as if the whole place has been washed in Frideswide's healing water, and never dried out again. 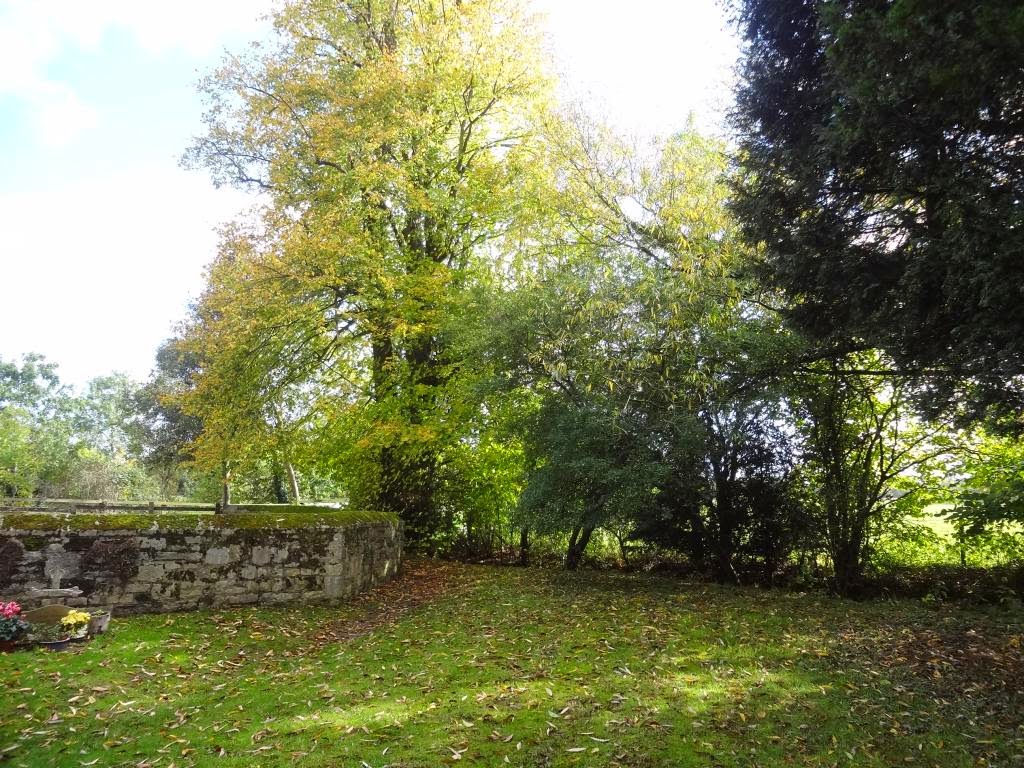 There was the occasional bird chirping in the trees, as if it hadn't noticed it's October and not May. 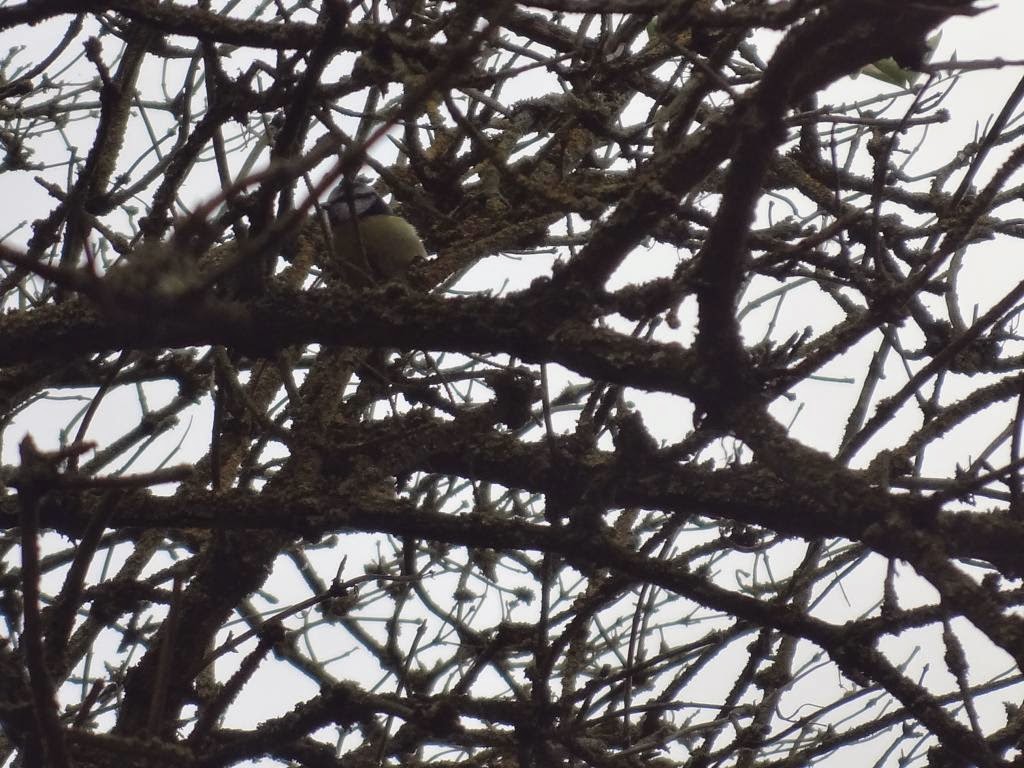 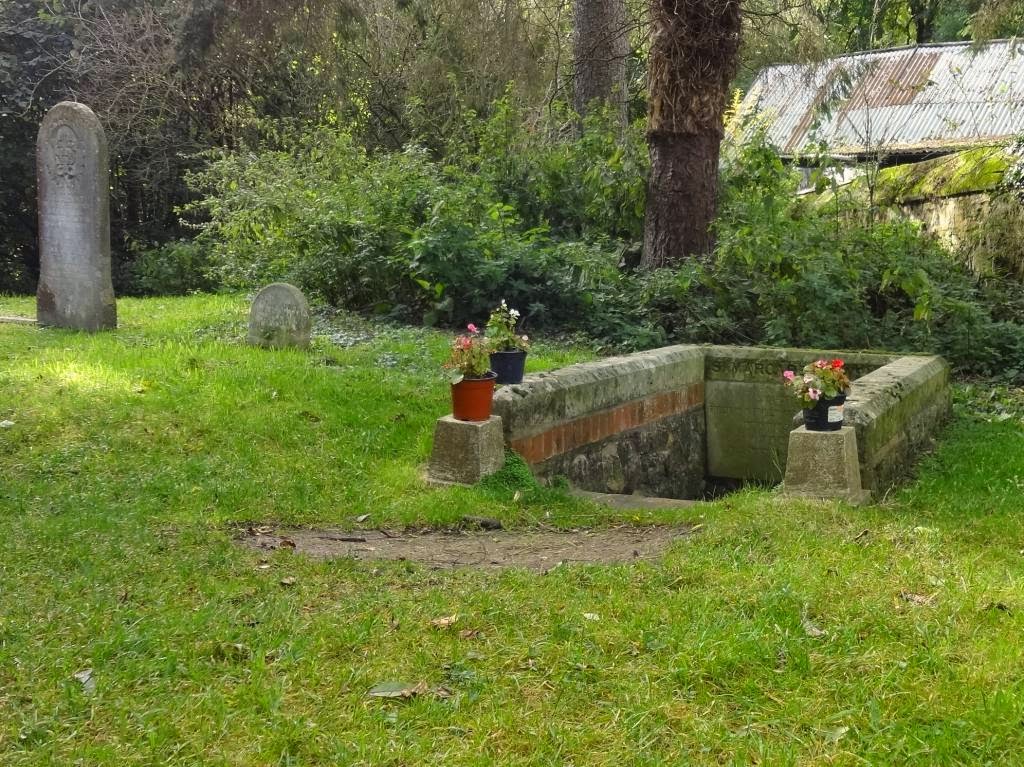 A mayde that seve yere ne myght nothing yse
Cam to hure in the wode, and felle adoun a kne.
Hure eyghen that holy mayde wysche with water of hure honde,
And as hole as any fysche that maide gan up stonde. 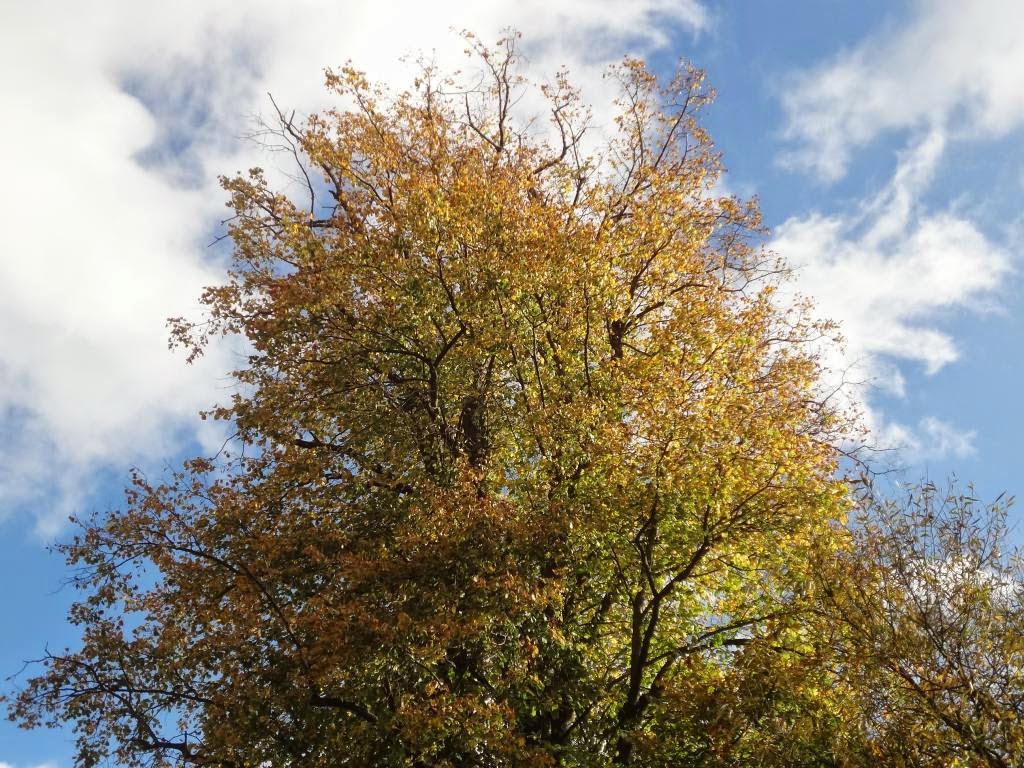 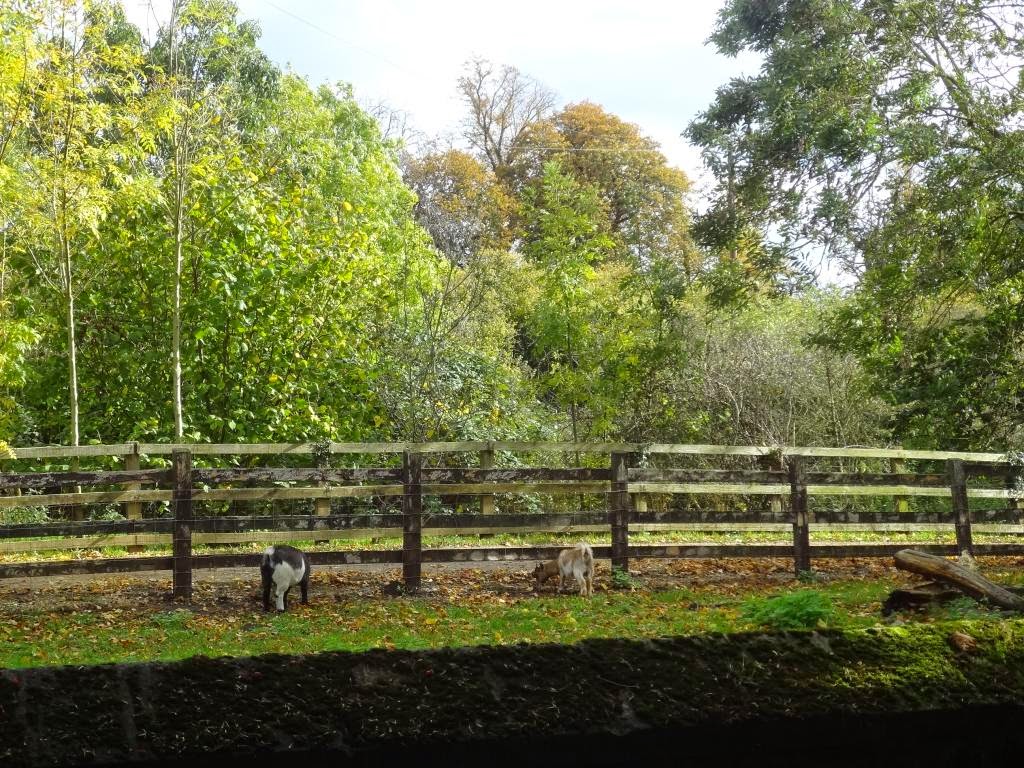 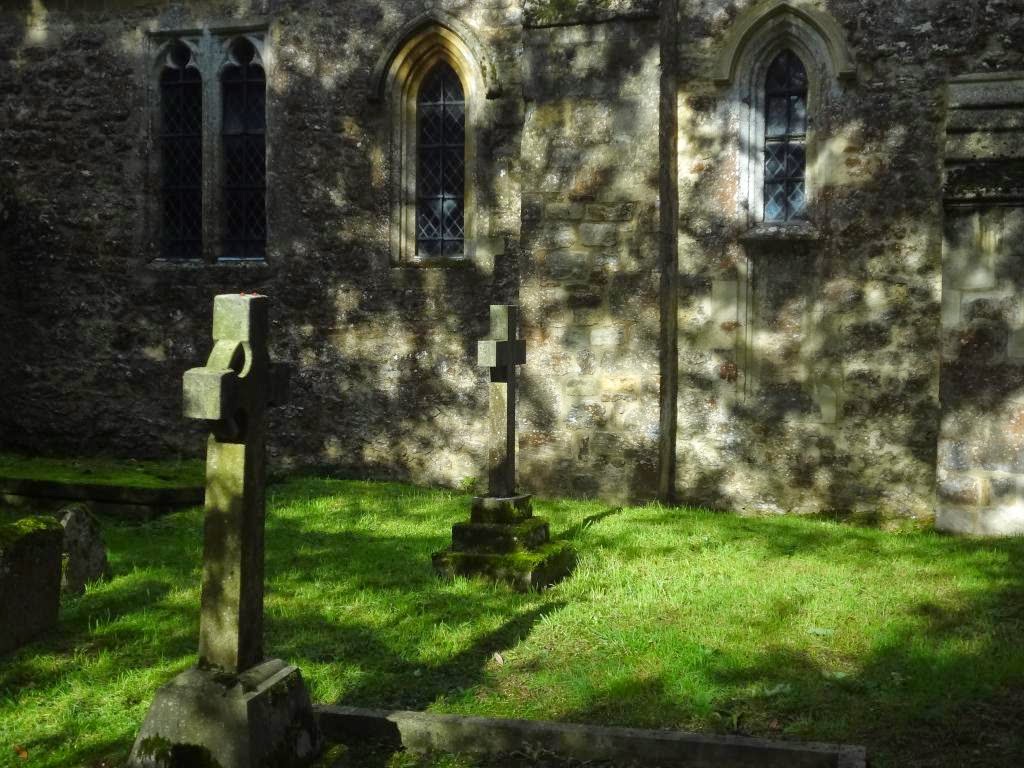 I had all these things swimming around in my mind as I stood beside St Frideswide's well: Langland and Hopkins and Edward Thomas and 'Balm in Gilead', and the holy stone and the dear ground of Draper's hymn. They are poems, and memories, which make me melancholy, but it's the kind of sadness which is not painful, either to experience or to recall; if you come 'with springing tears to the spring of mercy', even if there's no mercy to be found, the tears can bring their own healing.
Posted by Clerk of Oxford at 9:32 pm

what a wonderful blog. Thank you.

A little anecdote about St Frideswide's well. One Sunday in the mid 1970s the tiny congregation of Binsey, led by an aged priest, made their way to church for a service. Unfortunately their organist was ill. Maybe they prayed to St Frideswide, but anyway they suddenly saw two young men standing next to the well and asked if either of them could play the organ. Sure enough, one of them could, and did. As soon as the service was over the two young men departed and were never seen there again. The young men were, in fact, my brother, a fine pianist, and myself, but it was surely the saint who ensured we chose that day to visit her well.

That's a great story! They probably thought you were angels in disguise :)

I was doing a little internet research regarding St. Margaret's Church because I am reading P.D. James' _Children of Men_ and it led me to your blog. Gorgeous writing and pictures. I am anxious to delve into more of what you've posted. Thank you...